Andrew Lee (Phoenix corps 2016) teaches math at Mesa High School, in the same district where he went to school growing up. 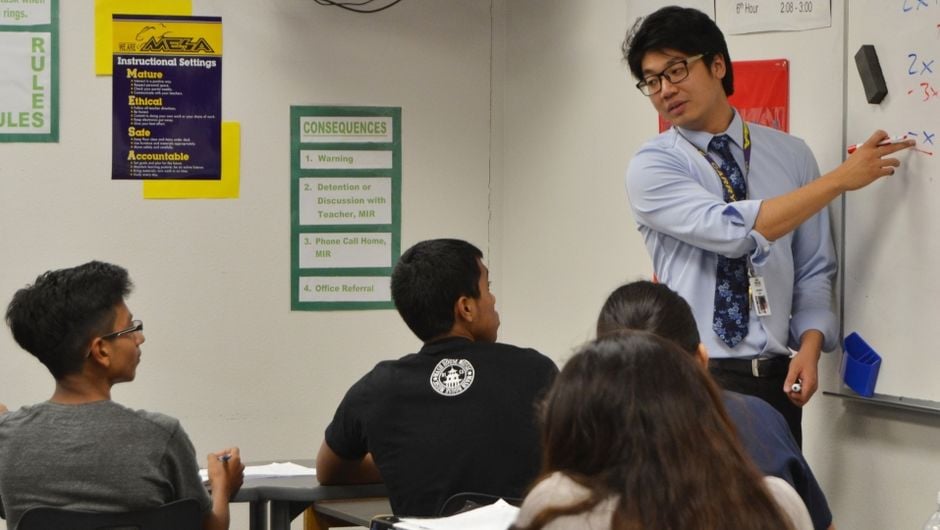 Andrew Lee was born and raised in the Valley of the Sun, attending public schools in north Mesa before he went on to study Aerospace Engineering at Arizona State University (ASU).

Now he teaches in the same school district that he attended, at a high school that was a cross-town rival for his high school. While his students spend time outside of school hanging out at the same places Andrew did as a teen, he says they’re having a different experience in school than he did. He graduated high school ranked 5th in his class, was an Eagle Scout, and went right to college, where he graduated with a 4.0 GPA. Andrew credits a wide support system for his success.

“The best that I can do with my time is to be a support system, and help [my students] achieve their full potential,” Andrew says. 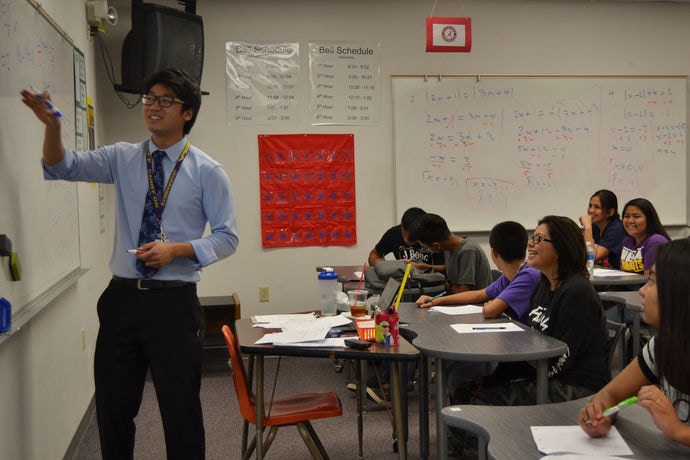 © Photo Marlena Sauceda Andrew (Phoenix 2016) uses humor to connect with his students, and makes them feel at ease.

Throughout his time at ASU, Andrew worked as a teacher’s assistant, and a tutor, and served as a Southwest District Governor for Circle K International, traveling across the country and representing Arizona in various community service projects.

“I enjoy helping other people succeed. I believe that every child deserves to succeed, no matter what their background,” Andrew says.

With his students, Andrew says he’s able to build relationships by just being himself with them, and giving his students the time and space to get to know him.

He gives his students time in class to share about their own lives, and talks to them about his art, which he often displays and sells at First Friday on Roosevelt Row.

Since Andrew teaches remedial math, many of his students have experienced failing before. In his first semester of teaching, Andrew began implementing a test correction system, in order to give students a chance to work through the problems they missed on tests, learn from their mistakes, and improve their grade. He’s seen students’ mindsets change so that they see themselves as individuals capable of succeeding.

This shift in mindsets is already starting to show. In just his first semester of teaching, Andrew helped raise his students’ average test scores by more than 20%.

“They’re starting to see that they can do this, and that’s the most rewarding feeling,” Andrew says.

After his first semester of teaching, Andrew says he is still trying to gauge and understand more about the education system, so he can figure out what he can do to make it better. Right now, he says, he’s focused on helping his students get to graduation and raise Arizona’s national ranking for high school and college achievement.