Hoang Murphy founded Foster Advocates to create a better present and future for youth in the foster care system. 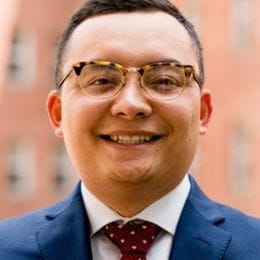 Most days look quite different for Hoang Murphy (Baltimore ‘14) compared to when he was teaching in the classroom five years ago. As a high school English teacher, his days were structured and regimented, including a daily schedule working with bright and engaged students and colleagues.

“My typical day now includes a lot of reading and meetings throughout the day,” Murphy said. “My daily goal is to make sure the foster community is heard—to make people aware of and care for foster youth.”

Murphy is the founding Executive Director of Foster Advocates, a nonprofit that envisions every person involved in Minnesota’s foster care system having the same access to opportunities and outcomes as their peers. Foster Advocates started in June 2018 and just hired their first employee in June 2019.

Managing the ever-changing needs of running a startup isn’t exactly a new experience for Murphy. He grew up on the East Side of St. Paul, Minnesota and moved around a lot as a kid, which exposed him to extensive changes and transitions. When Murphy was in the third grade, he and his brother entered the foster care system.

“The system worked how it should have for me,” Murphy said. His teacher observed that he and his brother were in a possibly unsafe situation and alerted child protective services about potential abuse.

Murphy was adopted at age 11 and spent the remainder of his childhood in the small town of Ada, Minnesota. He went on to college at Syracuse University where he dreamed of working in education and policy because of the negative ways he had experienced school as a child.

Murphy knew that the best policy work is informed by lived experiences. So during his spring semester of 2012, he worked at a high school in New York City through a public service and leadership partnership at Syracuse University. At this school in New York, he met Sandhya Dhir (New York ‘08), a fourth-year teacher at the time.

During his lunch, Murphy would sit in Dhir’s classroom and observe her teaching. Through Dhir, he saw what was possible when teachers deeply cared about their students. “When I walked into her classroom, I saw a very different culture from when the same students were in a different class that morning,” Murphy reflected. “She pushed me to think different. Being a good teacher was about being in a relationship with your students and then the learning could start.”

Much like the elementary school teacher who stepped up for Murphy as a child, so did Dhir, who helped him with his Teach For America application.

In 2013, Murphy graduated with a degree in public policy from Syracuse University and joined the Baltimore corps in 2014. In his first year of teaching, Murphy’s students achieved 1.9 years of growth in reading - meaning they raised their reading proficiency nearly two grade levels. Murphy’s students achieved 1.8 years of growth the following year. His students also received the highest scores in Baltimore for 10th grade English on Maryland’s state standardized test.

In addition to leading his students to academic success, Murphy went above and beyond to meet his students’ basic needs.

In his first few months of teaching, Murphy realized his students were having trouble focusing in class due to the immense Baltimore heat.

Murphy thought to himself, "I can continue to deal with this until the weather changes, or I can make some changes."

He went to the local hardware store and bought an air conditioner, then installed the unit in his classroom. The unit brought the classroom temperature down from 109 to 80 degrees, which made a significant difference not only in his students' engagement and performance, but also their ability to co-create a classroom centered on relationship building and continued learning.

Throughout Murphy's time in the corps his desire to work in education policy never dwindled. "While teaching, I saw really smart, caring, hard-working people trying their very best. They were coming against a tide of other harms that prevent change," Murphy reflected.

After two years of teaching in Baltimore, he returned to a policy focus. First working in Washington D.C. through a fellowship with Leadership for Educational Equity (LEE), a nonprofit supporting a diverse set of leaders with classroom experience to engage civically and politically. Murphy then worked for the U.S. Department of Education in the office of Secretary John B. King. This role was a radical shift from his previous time in the classroom, going from direct service in front of students to a seat far removed at the decision-making table.

“Even though our office was so well-intentioned, we were leaving out the voices that our decisions impacted," Murphy recalled. He couldn’t help but notice the staff weren't truly able to listen to the people most affected by their policy decisions.

In 2017, Murphy was heartbroken when he learned Minnesota’s licensure laws wouldn't allow him to re-enter the classroom, especially when he recalled his inspirations such as Sandhya Dhir and his students in Baltimore.

Murphy started re-engaging around the foster care system in Minnesota and reflecting on the impact of his own story. With the strong belief that the people driving the change should also be the people that are closest to the problem, Murphy researched organizations working to improve the foster care system in Minnesota. He worked with Stephanie Perez-Carrillo (South Carolina ‘14) and Amal Karim, (South Dakota ‘11) to complete a landscape analysis. They found that nowhere in Minnesota was a foster care organization doing policy work informed by foster youth themselves. Given this gap, Murphy met with a funder, Collen O’Keefe of the Sauer Family Foundation, who encouraged him to keep driving towards a solution.

Murphy held over 25 meetings with child welfare policy and advocacy organizations and found the same result—none of them were run by or centered on foster youth themselves. Murphy and his supporters decided there was a need for an organization led by someone that went through the foster system, but who could lead it?

After much discussion and contemplation, Murphy started Foster Advocates in June 2018, through initial support from the Graves Foundation. Foster Advocates works to ensure a better present and future for foster youth. In Minnesota, this work aims to make a difference for the 40,000 children involved in abuse reports (17,000 currently in foster care) and the 350 children that are going to be aging out of the foster care system each year. For them, the data is bleak. Only 1-3 percent will graduate from post-secondary education.

“No one would expect this to be acceptable for their own children and the state shouldn't either,” Murphy said. “Foster Advocates is working to change this and ensure that fosters and former fosters are leading the way. If it takes a village to raise a kid, it takes a village to fail one. I take that responsibility seriously."

You can learn more about Foster Advocates and Hoang Murphy’s work at https://www.fosteradvocates.org/