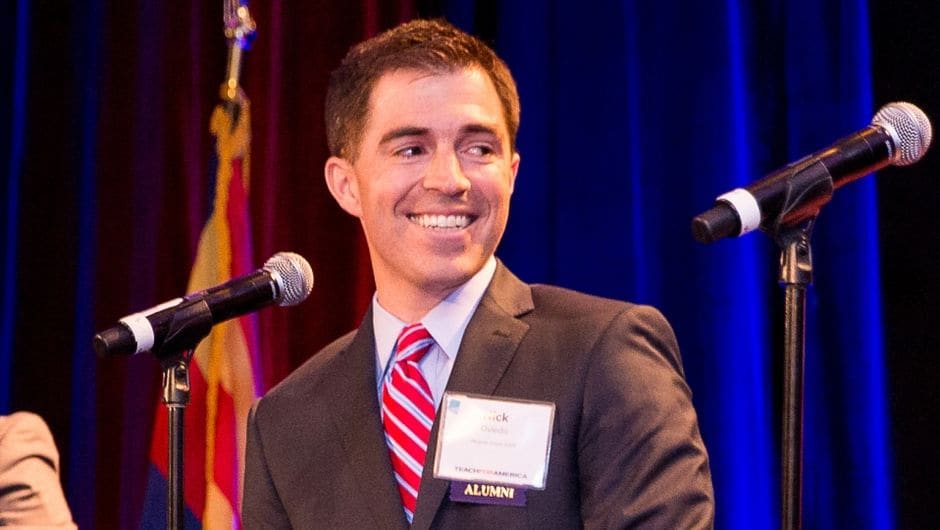 Nick Oviedo didn’t always want to be an educator. After graduating from Arizona State University with a degree in journalism, he spent a year working for the NBA in New York before he felt a pull to return to Phoenix.

“I found myself wanting to be in Phoenix and wanting to do something that had a positive impact on the community that I love,” he says.

So in 2009, Nick joined Teach For America as a corps member at Amy Houston Elementary in South Phoenix.

Today, he works as the Assistant Principal of Registration at South Mountain High School, just over a mile away from where he once taught special education, with students he’s known since his first day in the classroom.

He says he draws on his corps experience often when facing challenges in his current role. Just as he did as a first-year teacher, he’s having to “learn and do at the same time.” As Assistant Principal of Registration, he is now responsible for building the class schedule, as well as recruiting students from the district and charter schools that surround SMHS as they decide where they want to go to high school.

Nick is one of many Teach For America alumni becoming the veteran educators, school and district leaders, and community organizers collectively changing the systemic educational inequities far too common in areas like South Phoenix.

“I really rest assured knowing that there are people doing similar work to me in different parts of Phoenix,” Nick says.

Part of his community-building efforts at South Mountain include serving as a role model for the first-year corps members at the school. Nick says that the best thing he can do is be a positive influence on them. He wants to help them feel like part of the family, and to know that they’re appreciated.

Encouraged by the diverse network of TFA alumni serving in leadership roles throughout Phoenix, Nick can imagine a day when each student in the area is impacted by a TFA corps members or alumnus from Kindergarten to 12th grade.

“It’s important for people to know that there a lot of alumni who are in education in Arizona, I think more than people realize in teaching positions and leadership positions. I think that investing in TFA, it’s led to a lot of people working in Phoenix who might not have otherwise, and are still working in education. Including me,” Nick says.