5 Reasons to Teach in Miami-Dade

Since 2003, 1,500 Teach For America Miami-Dade corps members have served more than 211,000 students in Miami-Dade, the country’s fourth-largest school district. 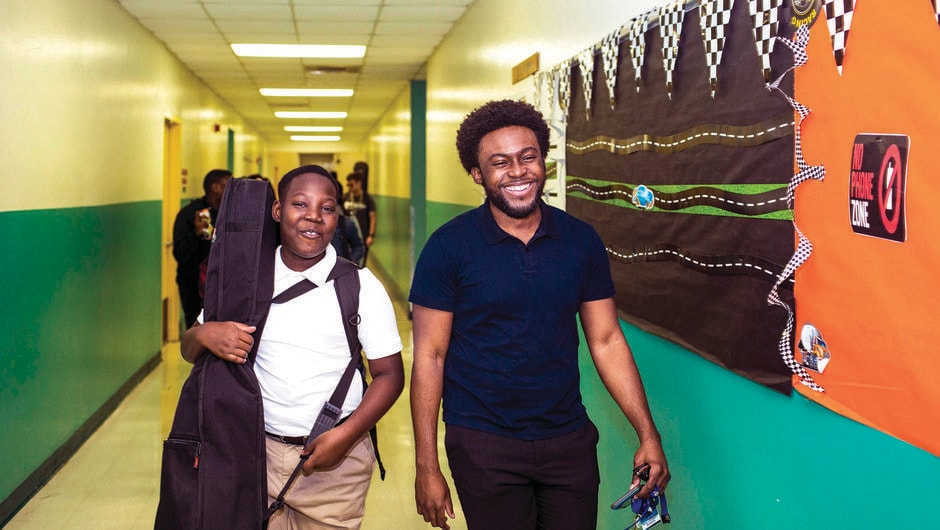 Teach For America Miami-Dade is a relentlessly dedicated group of people united around a shared vision of true educational equity. That is the first and most important reason to join the corps in Miami, and it’s why more than two-thirds of Miami alumni continue to work directly within education following their two-year commitment. Here are a few more favorite reasons to teach in Miami-Dade as a Teach For America corps member.

If there’s any one theme that arises again and again when you talk to Miami-Dade corps members and alumni, it’s leadership. Teaching in Miami-Dade is an opportunity to grow as a leader, alongside other people who are doing the same.

“My leadership skills develop more and more every day I’m in the classroom,” Emily Bourlas (Miami-Dade ’19) said. “I am trying to balance 24 different personalities and teach them in a way that works for each of them.”

Beyond the classroom, TFA alumni have started more than two dozen local social ventures, including Achieve Miami and Guitars Over Guns. These partnering organizations offer fellowships and other opportunities to corps members and alumni in the areas of education, public policy, technology, entrepreneurship, music, and more.

“Teach For America Miami-Dade provides support to corps members to be visionary, relational, and adaptive leaders,” said Irene Vailkit (Miami-Dade ’13). “Experience has taught us that one-on-one coaching, naming what lies ahead in the corps member’s journey, and building a strong community allows our corps members to thrive in their classrooms and as leaders in their school community.”

Time and time again, TFA corps members have been praised for how effectively they bring out their students’ potential, and for good reason. The numbers are clear: Students in corps members’ classrooms have been shown to achieve at higher levels than ever before.

“The dynamic energy of Teach For America’s young educators has been an integral part of the progress made by some of our most fragile schools,” said Miami-Dade County Public Schools Superintendent Alberto Carvalho. “We thank these motivated teachers for their courage, tenacity, and dedication, providing students inspiration, guidance, and a valuable education to ultimately accelerate academic achievement, boost graduation rates and maximize college readiness.”

The statistics don’t tell the whole story when it comes to the difference TFA educators make for students. Talk to any TFA corps member or alum, and you’ll hear an unforgettable story about the one-on-one connection that teachers make with their students.

“Only three weeks into the school year, my 9th-grade student, Julio, insisted on voicing his opinion on the structure of the class,” Irene recalled. “As a struggling first-year teacher, I found this to be annoying… but as time passed, I learned more about Julio. He came from New York, and he had completed eighth grade twice because his principal at his middle school was a TFA alum and insisted that he stay in school and repeat eighth grade after failing it the first time. Julio was now in 9th grade with me and was one of the most inquisitive and smartest students in my class. Realizing that he could read and understand stories at a higher level than his peers, I gave him the novel The Catcher in the Rye to read during his free time. He would then come and see me after class to talk about the book. As it turned out, Julio had passed the Regents exam in New York and could actually opt out of my intensive reading class. But when we talked about it, he told me that he liked my class, he learned a lot, and that an extra English class couldn’t hurt.”

You’ll Serve as a Champion for Immigrants

Miami is one of the most diverse cities in the nation, thanks in large part to its immigrant community. About 54 percent of Miami-Dade County residents are foreign-born, and 40 percent of its residents speak Spanish as their first language. More than 360,000 people in the regions speak French Creole as their first language, making it the second most-spoken non-English language in Miami-Dade. If you feel a calling to support and uplift students who are overcoming the challenges of living in America as immigrants, there’s no better place for you than Miami.

You’ll Be Immersed in an Exciting, Dynamic Culture

In addition to the beautiful weather and beaches, Miami has exciting culture to offer. In Little Haiti and Little Havana, authentic festivals and marketplaces abound. In Wynwood, you’ll find incredible art galleries and outdoor murals, one-of-a-kind nightlife venues, and innovative social initiatives. On top of all that, Brickell, Downtown, and the Design District are also great focal points of Miami’s energetic cultural and commercial landscape.

About 64 percent of Miami-Dade alumni say they formed personal or professional relationships that are still important to them. More than half have collaborated with fellow alumni in a professional context.

Some alumni have even kept in touch with students and their families. Cece Claridge, for example, created an app called Unicoin that connects college-bound students with financial aid opportunities that can be difficult to hunt down. This was possible only because students and parents trusted her enough to reveal personal information and discuss sensitive topics like their finances.

Do you feel a calling to advocate for students? Do you want to connect with others who feel the same way? There’s a family of equally passionate corps members ready to support you in our shared vision. Learn more about Teach For America Miami-Dade or apply now to be a TFA corps member.