A longtime advocate for the inclusion of students with special needs in traditional classrooms creates a unique space for hurting children to recover and thrive.

Liz Marcell Williams (R.G.V. ’99) is an ardent advocate for the inclusion of students with special needs in traditional classrooms.

So how did she wind up founding a separate center specifically for kids with mental and behavioral health needs so intense that traditional schools don’t have the resources to serve them? And what has she learned about what supports must be in place so that all kids can succeed?

Nearly five years ago, I traveled to New Orleans to write an article about Marcell Williams, then the director of intervention services (otherwise known as special education) for ReNEW Schools, a charter network. At the time, she was bucking charter schools’ reputation for turning away students with special needs, instead reaching to enroll students with autism, cognitive delays, and serious psychiatric disabilities.

While at ReNEW, Marcell Williams witnessed how New Orleans lacked key facilities needed to provide the medically endorsed “continuum of care” for students with behavioral and mental health disorders. Despite acute need, the city had no day-treatment programs for students transitioning out of hospitalization, and no residential treatment centers for the most severely affected kids.

So in late 2014, Marcell accepted a role as the founding executive director of the New Orleans Therapeutic Day Program, a first-of-its-kind option for students in grades K-8 with severe mental health disabilities. Most of the students referred to the program, where they participate in a combination of school and therapy, have experienced deep trauma such as abuse or neglect, the violent death of a loved one, or the loss of a caregiver to death or incarceration.

The program, which has operated as a state agency in partnership with Louisiana’s Recovery School District, the Orleans Parish School Board, and Tulane University School of Medicine, is transitioning to nonprofit status this year and will be called the Center for Resilience. With this change, its team of teachers, aides, therapists, and psychiatrists will be able to expand their reach outside of Orleans Parish. Eventually, the program will grow to serve children as young as newborns and up to 22 years old.

“I spent 15 years as a special educator promoting inclusive practices, so it’s a little ironic that I’m here,” Marcell Williams says. “But it also means that we’re really thoughtful about which students end up here. And our goal always is to transition them back to a traditional environment.”

Today, the program serves 38 kids at two locations, plus 6 children who receive services at home (typically, homebound students are those who pose a threat to safety). Students and staff alike practice restorative justice, a nonpunitive approach to resolving conflict. The goal is to create an environment of “unconditional positive regard” among the adults in the building and between adults and kids, Marcell Williams says.

Students’ specific challenges and behaviors vary. Many of them enter the program battling anxiety and depression, which can manifest in aggression and destructive behavior. Some are enormously impulsive. Some are hypervigilant, a common response to trauma that can make it nearly impossible for children to focus because their brains are constantly surveilling the environment for threats.Once in the program, students attend classes and take part in regular therapy sessions and psychiatric care, provided through the partnership with Tulane. 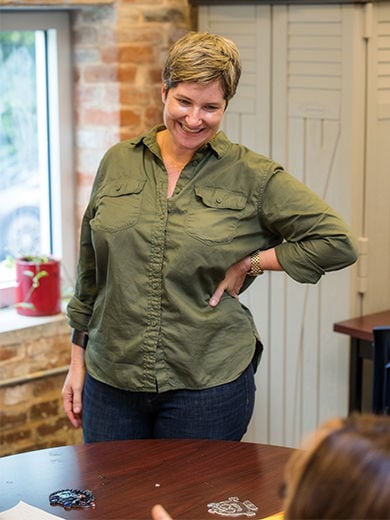 Students at the New Orleans Therapeutic Day Program receive academic, therapeutic, and psychiatric services in a setting designed to feel, in part, like a home. Brad King / Collin Richie Photography

Everything that happens in the program revolves around a core belief: Students do well when they can. It’s a beautifully simple reminder that kids, by nature, want to succeed, to feel proud, to make others happy. When it’s possible for them to do well in class, they will, Marcell Williams says. But when it’s not possible, helping the child to heal needs to take precedence over helping the child to learn.

She compares her students’ behaviors to what you can see of an iceberg: just the tip. “We’re interested in what’s underneath,” she says. Using ongoing psychiatric evaluations, the program develops a treatment plan for each student “aimed at healing, not compliance.”

“We were probably too school-like when we launched,” Marcell Williams says. At first she wanted to differentiate the program from others she’d observed where commitment to academic rigor felt lacking, so whenever students weren’t in therapy, they were in class.

But that resulted in too much conflict between teachers and students—the very thing students need least in order to heal. So the staff tried a new approach that offers kids more space and autonomy. Students now have a home base that’s designed like a living room. It’s staffed with an adult who can tutor students or just talk to them, depending on what they need. Students can be in home base if they don’t want to be in class.

“We’re not trying to replicate school structures or the ‘real world,’” Marcell Williams says. “They’ve had that. It hasn’t worked.” So far, students are opting to go to class more than predicted, she says. And academic results are promising. In the 2017-18 school year, students grew, on average, 0.9 years in reading and 0.8 years in math, even as many came into the program showing zero growth at previous schools.

The program also puts special effort into caring for and retaining staff, ensuring that the safety, trust, and respect between staff and students also guides interactions among adults. Employees receive every fourth Wednesday afternoon off, an acknowledgement of their need to recharge. Staff members frequently discuss one another’s limits and relieve each other in charged situations. And paraprofessionals are salaried employees, paid $6,000-to-$11,000 more per year than they would earn in neighboring districts, a cost covered through careful planning and tireless fundraising.

“We’re not trying to replicate school structures or the ‘real world.’ They’ve had that. It hasn’t worked.”

How To Do Better

After four years leading the New Orleans Therapeutic Day Program, Marcell Williams still believes fundamentally that students should be educated in inclusive settings as often as possible. In the whole of New Orleans, she estimates there are maybe 125 students in K-12 who are best served in a program like hers. But that doesn’t mean that schools—or the city at large—are doing well yet by all kids.

School systems have gotten so used to dealing with any child who walks in the door that educators have developed almost a forced pride in coping, often not fully understanding the level of support each student needs, she says. She experienced this herself when she led ReNEW’s intervention services. “Except for our most extreme cases, we weren’t very well equipped to say who could be served, and how.”

To serve each student appropriately—not only those students with the most severe problems—Marcell Williams says districts and states need to fund licensed therapists who can assess, track, and respond to students’ mental health needs. Systems beyond schools need to change too, she says. When a police officer responds to a crime scene where a young person is present, for example, there should be a requirement that the child is referred to services and his or her school is notified. At the state level, Marcell Williams is advocating for changes to complex policies around Medicaid reimbursements that she believes deter providers of necessary therapies from operating in Louisiana.

As the Center for Resilience grows, Marcell Williams spends her days strategizing to make it New Orleans’s regional provider of educational, therapeutic, and psychiatric services for children with the most serious mental and behavioral health needs. “I’m most passionate about building out a true continuum of services,” she says, “so the right kids get the right interventions in the right places with the most possibilities of success.”