The history of black homeownership in Orange Mound dates back to the late 1800s. Today, its residents are remaking their mark on the city.

The story of the Orange Mound neighborhood in Memphis, Tennessee, begins at the end of the Civil War, when many plantation owners who had lost their wealth, like John Deaderick, sold off parts of their land.

From there, most textbooks move along to Reconstruction-era politics and skip over the story of what grew in the untended fields just outside Memphis’s eastern limits. In 1890, a young developer purchased one section of the former Deaderick land, called the Orange Mound subdivision. Then he made the decision, nearly unprecedented in the South, to sell the lots to black people.

Imagine the scene—repeated, with slight variations, for each of the nearly 1,000 lots sold. It’s 1890 and a black family has just purchased a 250-square-foot lot, long and narrow, for about $40. It sits on the same Orange Mound land where not three decades earlier the buyers would’ve been—and perhaps actually were—enslaved. Imagine that this family, like all of their neighbors, builds a shotgun-style row house with clean-cut clapboard siding that makes the whole street smell of pine. There is a small front porch offering shade, and a small front yard where the children play. They plant an oak tree that will grow to shade the neighborhood well into the next century.

Over several generations, as Memphis’s borders expanded, Orange Mound grew into one of the largest and most prestigious black neighborhoods in the urban south. Residents frequented the neighborhood’s stylish shops, restaurants, and theaters. And they formed a mighty voting bloc, giving Orange Mound leverage in its deeply segregated city.

In 1928, a five-acre park opened in the heart of the community. Soon after, a large swimming pool was added. “Every day at the park was a celebration,” says Mary Mitchell, an 82-year-old lifelong resident and local historian. Vendors sold snacks, kids swam and played, parents caught up on news and gossip. There were even some makeshift fairways for golfing, Mitchell says. “It really was like a little heaven in Orange Mound.”

It didn’t last, though. In the spring of 1963, the U.S. Supreme Court granted a victory to civil rights leaders by ordering Memphis to desegregate its public park system. But in order to avoid complying with desegregation, city leaders closed public pools.

For four years, Orange Mound’s swimming pool languished, locked up and unused. By early 1967, the parks department deemed it too costly to repair and approved sale of the land to the Mid-South Refrigerated Warehouse Company. When the city announced the sale, Orange Mound mothers organized and attended a City Commission meeting to protest. Under its own rules, the commission was to hold a public hearing for any sale of land worth more than $1,000. But according to a newspaper article at the time, “no hearing was conducted.”

A grainy, April 1967 newspaper photo shows two bulldozers filling in the land. As much as anything, that pool was a symbol of Orange Mound’s vitality, Mary Mitchell says. And its demise foretold a fierce resistance on the part of city leaders to an equitable process of desegregation. “That is really when our community began to decline,” she says.

In the decades following the pool’s closure, and for a web of reasons, rates of violence and poverty crept up. Longtime residents began to move away, and young people who left never moved back. Today, about a third of the homes are abandoned, clapboard siding in disrepair, windows boarded up. Well over half of Orange Mound children live in homes with incomes below the poverty level. Though the neighborhood schools have seen progress in the past couple of years, they remain among the lowest performing in the city. 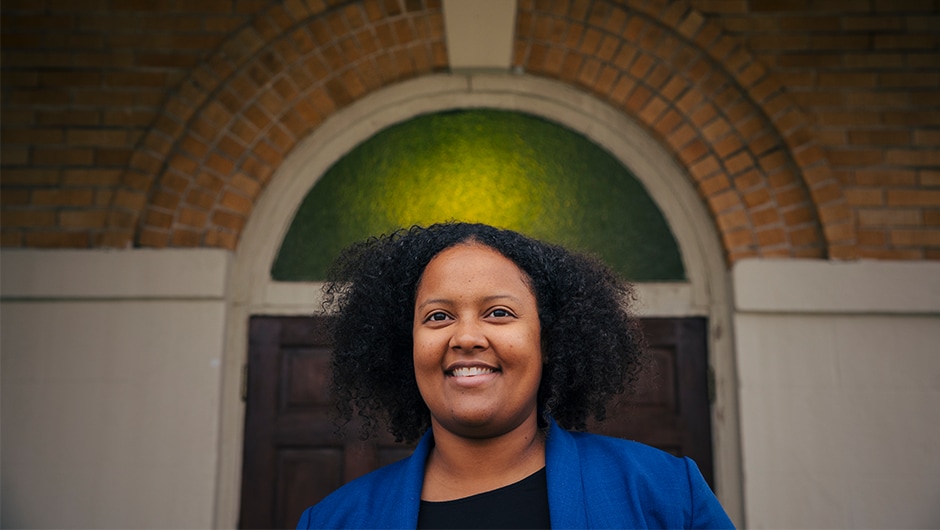 In 2019, Thornton and the JUICE Orange Mound board will focus on finding and supporting economic opportunities for neighborhood residents. Andrea Morales

Britney Thornton (Memphis ’14) is Orange Mound raised. She left to attend Baylor University, spent a year teaching in Thailand, and earned a master’s degree at the University of Pennsylvania. When she joined the Memphis corps, she knew she wanted to live in her old neighborhood, but couldn’t find a high-quality rental. So she slept in a bunk above her little brother’s before buying her own Orange Mound home in 2017.

Thornton, a math interventionist by day and a community organizer at all other times, calls on her neighborhood’s history as a source of inspiration. “There’s a connection to blackness in Orange Mound,” says Thornton. “Whether you grew up in Orange Mound or not, you have a sense of ownership here.”

In 2016, Thornton founded JUICE Orange Mound with an idea to lead spare change drives and then put the money back into the community. JUICE has invested more than $12,000 toward efforts like a neighborhood garden and a community baby shower.

But more than a way to fundraise, JUICE has become a nexus for neighbors to build relationships and connections. Through JUICE, Thornton leads events including an annual 5K run and monthly neighborhood bike rides. JUICE’s monthly meetings typically attract 20 or 30 people to generate plans and take actions to meet the community’s needs. Thornton does outreach to local schools and churches and works on bringing in millennials and students. One board member is her former student, now a high school junior. 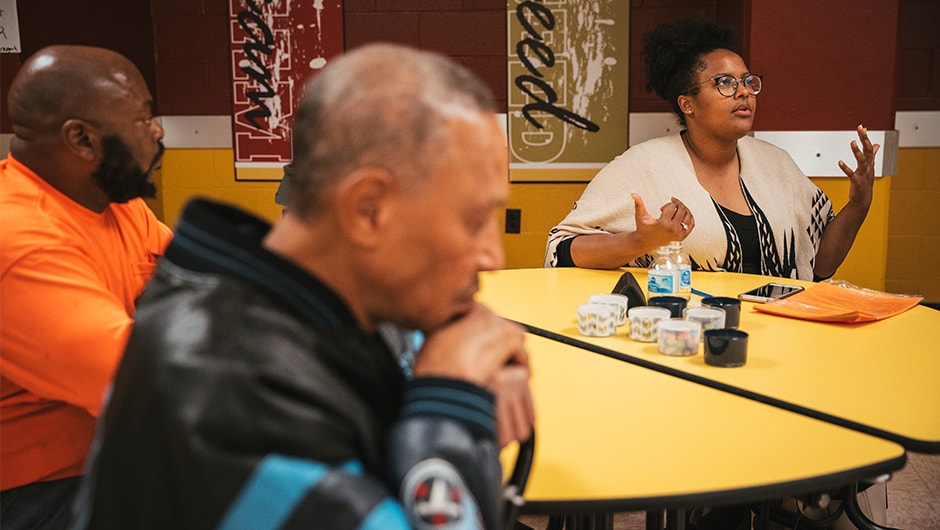 In December, Shelby County Mayor Lee Harris appointed Thornton to the county’s Community Redevelopment Agency—one of three boards she sits on, along with an array of local task forces. And she works social media relentlessly on behalf of Orange Mound.

Her profile is such that, regardless of her expertise, she gets called whenever neighbors need a hand. Earlier this winter, a friend called about a rodent infestation at the public housing complex where she lived. “I hate mice. Terrified,” Thornton says. But she showed up and joined a long campaign of phone calls, canvassing, and overnights in the infested apartments, which she documented on social media. And finally she and her neighbors made progress with the property managers and the city’s code enforcement department.

In 2019, JUICE is focusing on economic engagement, starting with the launch of a neighborhood small-business incubator. Thornton looks to the potential in residents like a 24-year-old self-taught music producer who lives in a small house where he supports his younger brothers. Or to the father of 12 who showed up at a December JUICE meeting to discuss how to expand his small contracting business.

Thornton often says that Orange Mound has just who it needs. Through JUICE, they’re feeling connected and supported. The challenge moving forward—for JUICE, the neighborhood, and Britney—is sustainability. As residents renew the neighborhood, will they be the ones to benefit from its revival? The more people Thornton connects with, the more she believes that they will—which is what she hopes they’re all feeling, too.

In "Hidden History" we share stories of communities with rich histories that have been overlooked or glossed over in textbooks.