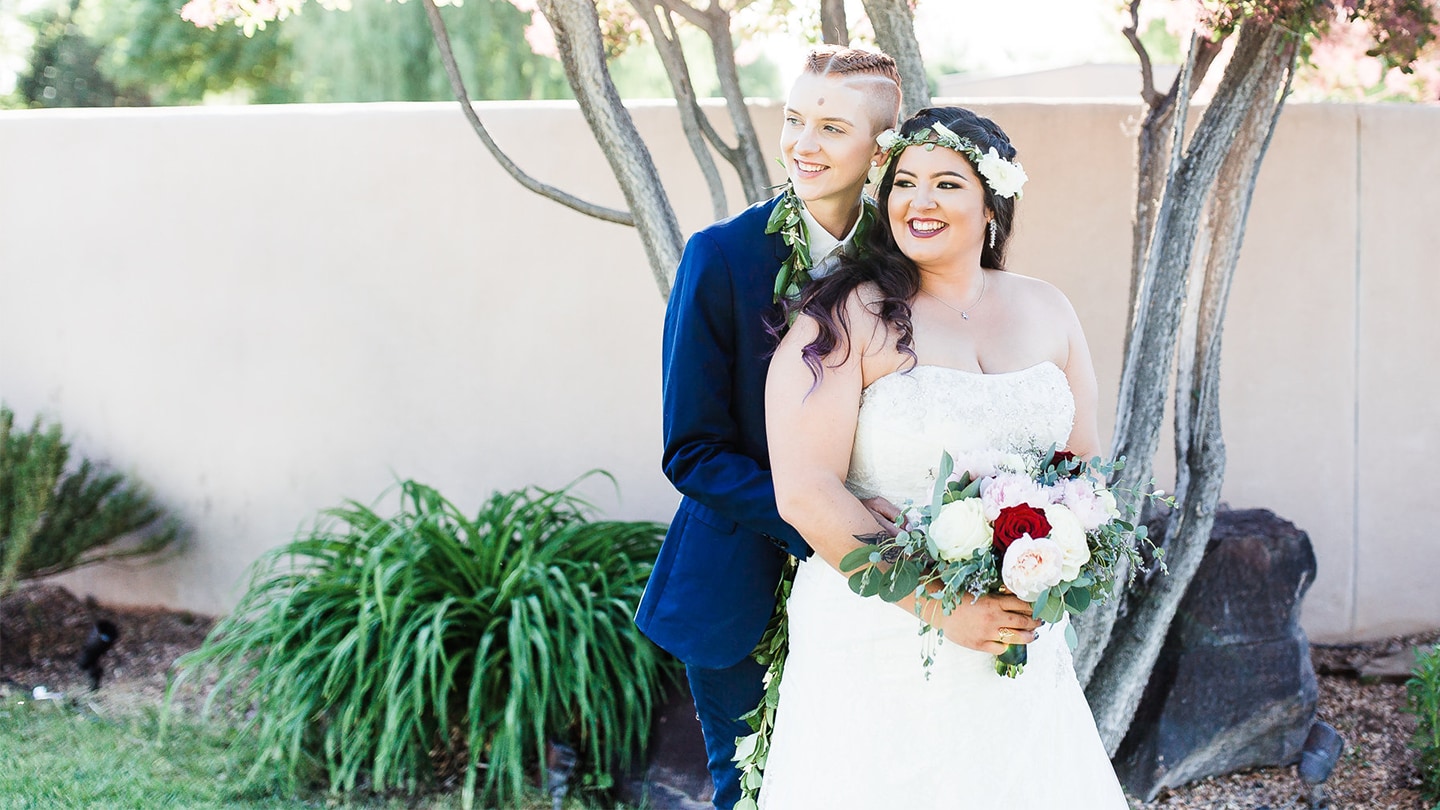 This story has all the makings of a rom-com: a love tested by time and distance, multiple proposals, and a wedding party that ended with an epic dance circle. Oh, and a happy ever after.

About Sienna and Pili 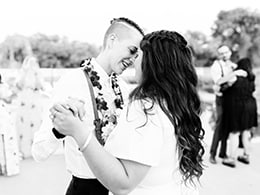 It was a crush turned epic love story between two alums, but an ocean and two years apart in two different regions – New Mexico and Hawaiʻi – tested their love. Through time and distance, their flame remained lit. Now they have their happily ever after.

Sienna: We first met at Phoenix institute in 2014. I remember watching her perform a Native Hawaiian song of thanks. I’d never experienced a more beautiful song or person before. It was one of those rom-com moments, when everything stands still and it’s just us. But I wasn’t sure she was interested in women, so I didn’t let myself get too caught up in my feels. Until that LGBTQ affinity group.

Pili: About halfway through institute, Sienna mentioned that her girlfriend was coming to visit. I was all, “Oh? Girlfriend, huh?” She was cute and didn’t talk much, but I remember from that moment being like, “OK, Sienna, I got my eyes on you.” Later at our first LGBTQ affinity session on campus, I remember Sienna walking in and looking shocked when she saw me. It was pretty comical.

Sienna: After that session, I saw Pili sitting by herself at a cafeteria table, and I just wanted to know everything about her. I asked if anyone was sitting with her and we spent the next 45 minutes discovering how much we had in common, including our love for trap music. If it’s possible to become best friends with someone in a two-week period, we did it.

Sienna: We didn’t have a first date until a year into knowing each other because we were both in committed relationships when we met. After Phoenix, we parted ways. She was in Hawai‘i, and I went to New Mexico. Out of the blue the next year, Pili texted asking me about my first year teaching and my summer plans. The universe definitely had some fun with us—we both were going to be in L.A. at the same time! So our first date was on a sunny morning in L.A. It was like we hadn’t skipped a beat.

Pili: When Sienna picked me up she was trying to play it cool, but I knew better because when she hugged me her heart was pounding. We went to this little bagel shop, then we took a little hike. I think Sienna might be mortified permanently by this, but at one point on our hike she told me she “had an urge” to kiss me. It was so cute, and from that moment I knew she was just a big softie.

What’s something unexpected you learned about your partner when you started dating?

Sienna: I learned that Pili could rap the entire song “It Wasn’t Me” by Shaggy. Not only that, but she then told me it was the first song she had ever learned all the way through and that she had first heard it over her Barbie radio in third grade. She’s definitely cooler than me.

Pili: When she flew to Hawai‘i to meet my family over Thanksgiving break during that first year we dated. Watching her interact with my family so naturally sealed the deal.

Sienna: I knew before I even dropped her off after our first date. Losing her from my life that first time was my biggest regret. I swore I wouldn’t let her go again. I started looking at engagement rings the first month of our relationship (very Jim Halpert).

You two seem like a perfect match. Do you ever disagree?

Pili: Oh my God, constantly over slippers! In Hawai‘i, we call that footwear that’s rubber and has a little wishbone-looking thing separating your big toe from other toes “slippers.” Sienna, being from the continent, calls them flip-flops. Gross.

Sienna: They are flip-flops! This is what happens when a mainlander falls for an island girl.

Aside from foot apparel lingo, what’s something you two have had to overcome?

Sienna: Our first year together. We started our relationship long distance—I’m talking about “across a continent and ocean, take an eight-hour plane ride, change four time zones” distance. We sometimes spent days upset with each other because we were tired, stressed out, and in pain from being apart. I counted the minutes until we could see each other again. I told myself, if we could make it through that first year, we could make it through anything.

Pili: Which one? The unofficial proposal happened over the phone when I was living in Hawai‘i. Sienna and I would talk on the phone late into the night, falling asleep on the phone even. One morning we were drifting in and out of sleep when Sienna asked me, I’m pretty sure half joking, if I would be her wife. I said yes.

Sienna: Our relationship is too epic for me to leave our proposal story as a simple phone call, so I immediately planned to propose in person in Hawai‘i. I planned to ask her at her favorite hiking spot with the backdrop of a breathtaking view. That was until it monsoon-ed for two weeks straight before I visited. I improvised. We went down to one of the local beaches. As the sun rose over the ocean, I pulled out the ring.

Was the wedding as memorable as the first part of your couple journey?

Sienna: I should preface this by saying that our families and loved ones mainly came from out of town—Florida, California, and Hawai‘i. And New Mexico, where our ceremony took place, has a much higher altitude. When everyone at the reception was about five drinks in, my younger brother, a budding DJ, put on “Crank That” by the beloved Soulja Boy. Remember those middle school dances where everyone would form a dance circle? That happened. We danced like it was 2007.

Pili: I look back on a picture of that exact moment and I laugh hysterically. We really couldn’t have anticipated the amazing bonds and friendships made that weekend.

Shared Space: Promoting Community and Unity in the Classroom

Creating an Inclusive Classroom for All Students

Transgender Rights in Schools: My Vision for One Day