Two Dallas-area teachers experienced the ways social and emotional learning changed the weather in their classrooms and escalated their students’ success. So they set out to change education policy.

Katie [Walantas] Benningfield and Jalen Hemphill became friends as fellow members of the 2014 Dallas-Fort Worth corps because they shared “a lot of the same ideas and mindsets,” as Benningfield says.

But then the two—Benningfield was teaching fourth grade math and science at an elementary school in the Pleasant Grove neighborhood of South Dallas, and Hemphill was teaching sixth grade English at a middle school in the Oak Cliff section—had parallel experiences that converted them from early-career teachers, to teachers who are also policy advocates.

Can teachers—even in their first years—make an impact on policy without leaving the classroom behind? Yes, Benningfield and Hemphill say, and this is how they did it. 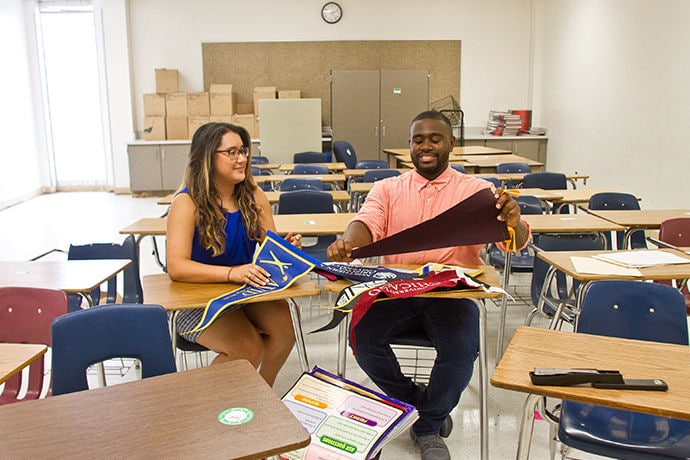 Jalen Hemphill’s school was under construction right up to the start of the school year, so his friend Katie Benningfield came by to help him unpack his boxes and get his room ready to welcome students to AVID college-readiness classes. Mark Graham

Hemphill entered teaching with a legacy to live up to. His father is a principal in the Garland Independent School District where Hemphill grew up just outside of Dallas. His mother, Babetta Hemphill, runs student services for the Garland district and was a 1992 Rio Grande Valley corps member.

In his first year of teaching, Hemphill had nothing left over from what he poured into his classroom. But by his second year, he could breathe, and at the invitation of his students he began to visit their churches. At a community meeting in Oak Cliff, he met an organizer for the ACLU who was rounding up supporters for a proposal by Dallas Independent School District (DISD) board of trustees member Miguel Solis (Dallas-Fort Worth ’09). Solis was trying to persuade his fellow trustees to end suspensions of Dallas students in kindergarten through second grade, and to invest in social and emotional learning and trauma training for teachers district-wide.

By his third year in the classroom, Hemphill and the other teachers at his school had been trained to replace punitive discipline, using restorative circles to help students build relationships. Hemphill took over the classroom implementation for his school and went deeper into the expansive curriculum, incorporating habits-of-mind prompts, consensus-building and other tools into the classes he ran as “mini-democracies.” He says, “That’s when I geeked out. I saw how impactful it was for my kids and how much better they were doing in school,” especially in reading. Hemphill's students gained the equivalent of 2.7 years of reading growth in just under a year, and all of his eighth graders were admitted to their first-choice Dallas high schools.

That same year, the DISD board got into a long-running discussion of Solis’s proposal to end suspensions, and Hemphill dedicated himself to getting the policy change passed. He began volunteering through the ACLU with the nonprofit Texas Organizing Project. He addressed parent meetings on the power of social and emotional learning. He attended every school board meeting (13) and testified three times in two years. He spoke at press conferences. And when the board voted unanimously to end suspensions among the youngest students, Hemphill was there, having testified again.

He engaged in much behind-the-scenes coordination with organizers, and networked with teacher-friends and community leaders who needed persuasion to back the policy change.  But Hemphill’s key strategy was simple. Show up, make your face known to board members, and never stop telling your story of student success.

“I know teachers who think that going to a board meeting won’t make a difference, but they’re wrong,” says Hemphill, who now teaches AVID classes in the Garland district where he grew up. “As connected as we all are now, if teachers could be activated, honestly I think we could change the face of education.” 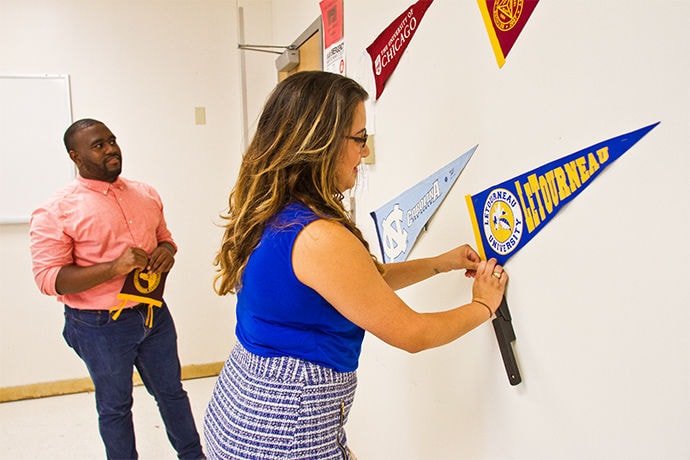 Jalen Hemphill pursued a strategy of showing up at school board meetings, making his face known, and describing his students’ successes. Katie Benningfield opened her classroom to visitors. Mark Graham

This past August, Katie Benningfield traveled from Dallas to Austin to testify before the Texas House of Representatives Public Education Committee on why the state should train teachers for leadership and pay them incentive bonuses for working in historically disenfranchised communities and schools. She witnessed the benefits of that approach when it was successfully piloted by her turnaround placement school, Annie Webb Blanton Elementary. “I was surrounded by incredible educators,” she said. “I grew as an educator and my students grew dramatically.”

That was the latest step in an advocacy journey that began when Benningfield, like Hemphill, dramatically improved the weather in her classroom by devoting up to an hour a day to developing kids’ social and emotional skills. Her results were so encouraging that she regularly hosted visitors to her classroom who wanted to see the pilot at work with students who were making real gains. Benningfield went from having 45 percent of her students meet math standards in her first year of teaching, to 85 percent meeting standards last year, her fourth.

Benningfield (who chairs the Dallas-Fort Worth branch of The Collective, Teach For America’s association for alumni of color and indigenous alumni) has put time and effort into learning how to use her teacher voice for policy change. She got active with Leadership for Educational Equity (or LEE, the nonprofit that supports corps members and alumni in civic engagement). As a LEE Summer Policy Fellow, she helped the Dallas District Attorney’s office create a curriculum to teach students about city codes.

But for her, the most important step on the journey was overcoming what she called her impostor syndrome. As a beginning teacher, she half-believed veterans who told her, “You’re so young, that’s why you’re so optimistic” about changing the system. But as she made strides, she came to believe that seeing what worked with students “gives me a level of authority that no one else has.”

At the same time, “I started looking at the people on the school board or state legislators who deal with education, and most of them have never been in a classroom. Most of them have no idea what it’s like to implement the policy they’re pushing for.” She immediately felt less intimidated, as a young teacher, by their titles. “After one year of teaching, you will have had more classroom experience than most of the officials who are making policy,” she says. ”You did it, you learned something, and that knowledge is powerful.”

Benningfield recently became a founding teacher at the first Title 1 gifted and talented magnet school in Pleasant Grove, and also a fellow with Teach Plus, another nonprofit dedicated to helping teachers lead systems change. Expect to hear more from rising young leaders, she says. “I feel like it’s my responsibility to connect with other teachers and professionals to say, ‘Hey this is what’s working for me. If it’s working for you too, then let’s do something about it.”

This article was co-written by Nicky Blake (Twin Cities '09) and Susan Brenna.