An excellent civics education helps create engaged, informed citizens, and some TFA alumni and corps members are dedicated to providing it. 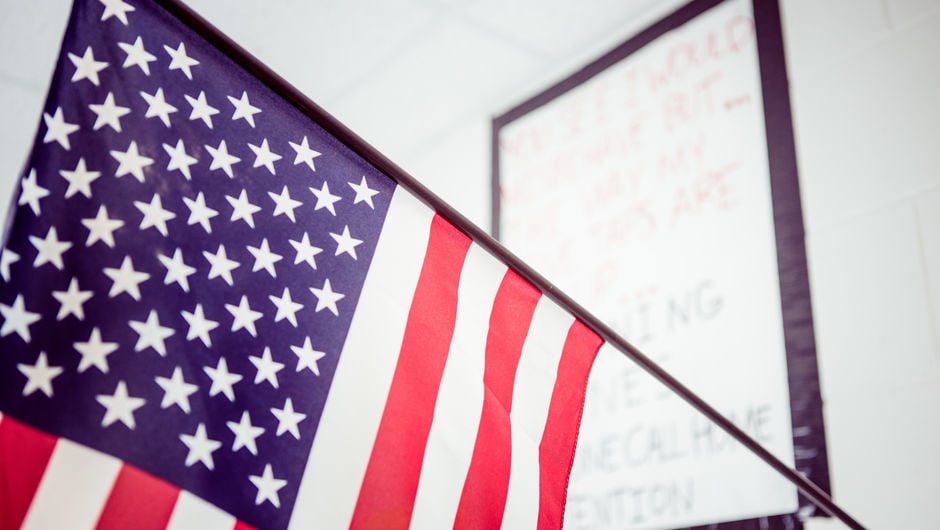 The entire fourth-grade class at Achievement First Iluminar in Providence, Rhode Island, lined up at a real voting booth to cast their votes for their first student council. Afterward, they received genuine “I Voted” stickers to celebrate their participation—just like the grown-ups on Election Day.

In the weeks leading up the election, their teacher, Carlyle Vincent (Rhode Island ’18), had watched in awe at her students’ enthusiasm. For a school where the majority of students identify as Latinx, this was a big deal. “I think this experience and the content we've been teaching this year with American history has sparked some really great 'ah-ha' moments and thinking,” Carlyle explains. “They see that they can join an organization, vote for people who look like them and represent them.” 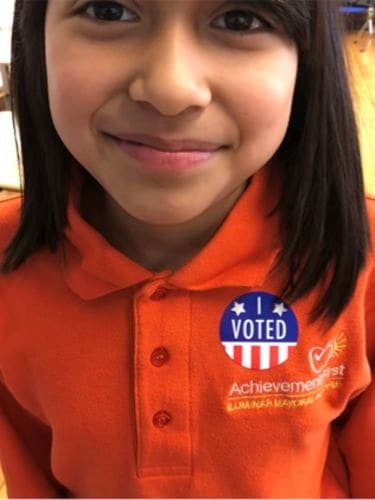 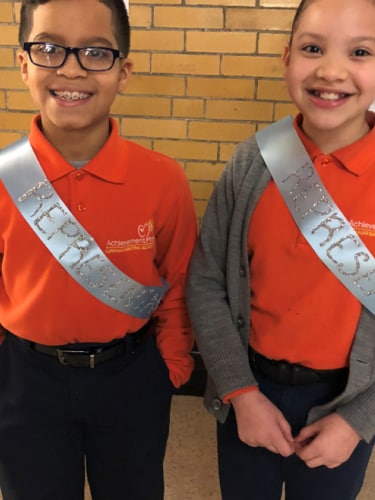 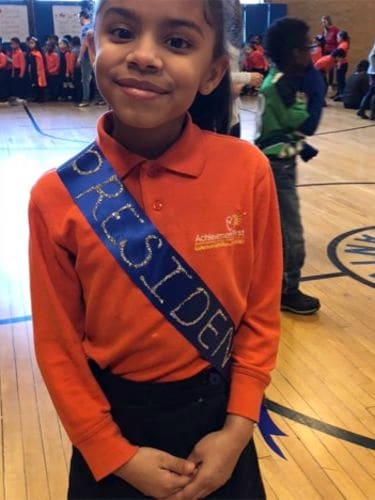 The State House agreed to provide authentic voting machines for the election at Achievement First Iluminar in Providence, Rhode Island—and "I Voted" stickers."

The goal at Achievement First Iluminar was to make voting as special as possible.

After each class held its own primary, the students who emerged as their class's candidate addressed their 100 other fourth-grade classmates.

Civics in the Nation

The past few years have seen a surge in civic engagement, participation, and grassroots activism by young people. We’ve seen community organizers hard at work and the students of Parkland, Florida, banding together and exercising their First Amendment right to march and advocate for their cause. But are these examples of civic responsibility enough to achieve lasting change when many U.S. students lack the opportunity to learn and engage with civics in a meaningful way?

A 2018 study by the Brookings Institution’s Brown Center on Education Policy examined the fourth-grade National Assessment of Educational Progress (NAEP) civics assessment test results from 2010 and eighth-grade results from 2014. It found that, while civic engagement student test scores may have increased, the state of civics education in the U.S. remains poor. When it comes to race, ethnicity, and family income, the gaps in civics scores are “alarmingly wide” and growing, according to the report: "Caveats about NAEP’s limitations notwithstanding, the size of these gaps—and the lack of progress in closing race- and income-based gaps—is disconcerting. Civic participation affords political power, and broad participation is essential for a healthy, inclusive democracy."

“Caveats about NAEP’s limitations notwithstanding, the size of these gaps—and the lack of progress in closing race- and income-based gaps—is disconcerting. Civic participation affords political power, and broad participation is essential for a healthy, inclusive democracy.”

Civics in the classroom helps build responsible citizens who vote and engage with their broader community. It supports a vibrant future for democracy, combats the viral growing barrage of misinformation and “fake news,” and ensures that students know their rights—something particularly important to those in historically marginalized communities where Teach For America corps members teach.

To remedy this deficit, many alumni and corps members are working to bring high-quality civics education to the classroom. And Teach For America has signed onto an effort by the nonprofit CivXNow aimed at galvanizing a coalition of organizations committed to improving civics education nationwide.

Although every state requires students to participate in some level of civics education, the amount and quality of civics coursework vary. Moreover, many states do not require students to demonstrate any proficiency in civics or social studies.

At schools like Democracy Prep Public Schools, however, civics and preparation for citizenship are both requirements and a backbone of the curriculum.

Founded in 2006, the charter network educates 6,500 students in 21 schools across New York, New Jersey, Baton Rouge, Las Vegas, and San Antonio. Serving predominantly students of color, the majority of whom qualify for free and reduced lunch, Democracy Prep's mission is to “educate responsible citizen-scholars for success in the college of their choice and a life of active citizenship.”

It is not uncommon for students to canvass together or for a math class to explore datasets about poverty and race in New York City. A class assignment might have students to analyze the rhetorical devices used in “Letter from a Birmingham Jail.” As seniors, students enroll in a capstone course in which they develop a “Change the World” project in which they are tasked with coming up with a solution to a real-world social problem.

“It is very important that students take what they're learning in school and transfer that knowledge and those skills into making their community a better place and engaging with their community on a personal and personally connected level,” explains Ashley Getting (Mississippi Delta ’10), history department chair at Democracy Prep Charter High School in New York City. Ashley also coordinates the school's Change the World Project.

Every year, students choose from a variety of project topics. “We live in New York City, and homelessness is always a very prevalent topic—and issues of poverty,” Ashley says. “This year, I have a student focusing on Islamophobia in our community. In past years, we've had students tackling gentrification and the segregation of New York City’s public schools. We have quite a few students doing the disparities in access to STEM education.”

A recent report by Mathematica exploring Democracy Prep’s active citizenship curriculum and its impact on civic participation—specifically voter registration and participation in elections. The study found double-digit growth in both of those.

When it comes to taking a look around with a critical eye, Carlyle, the fourth-grade teacher in Providence who ran the student election, believes you are never too young to start.

“Students have been so interested in American government, voting, and how it works—particularly with the Declaration of Independence, the Constitution, and the Bill of Rights—kids had so many questions, I actually ended up extending our social studies unit an extra week,” Carlyle says. That excitement and eagerness led Carlyle's principal to recommend that the fourth-grade students participate in student council.

Carlyle sent a parent newsletter home announcing the student government and the various positions—a president, vice president, secretary, and two different representatives from each class. If they were interested in running, students had to write a paragraph about which role they wanted and why.

The response was phenomenal. “It was great and inspiring to read why 9-year-olds want to be a part of student council. We'd get in forms that would say, 'I’ve been at this school since first grade and this school community means so much to me. I really want to help make changes and make this school a better place,'” Carlyle says. 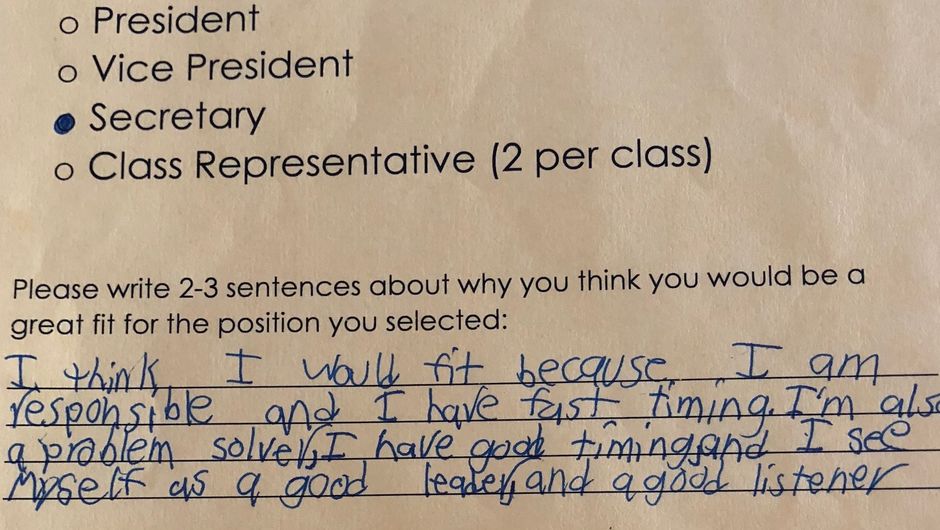 A student at Achievement First Iluminar puts their hat in the ring and writes why they'd make a great class Secretary.

Later on, after each class held its primary, the students who emerged as their class’s candidate addressed their 100 fourth-grade classmates. They even presented ideas for policy initiatives, like extra minutes of recess and a popular kindness initiative.

In the end, the real surprise came when the State House agreed to provide authentic voting machines for the election. After the election, Carlyle noticed how many students told her how fun but easy voting was.

“Having access to decide who you want in your government is such a privilege in America,” Carlyle says. “I know this is on a micro scale, but giving them a voice to make a change in their school and in fourth grade, is an ideal model to help them understand the change they can make in their communities.”

As for the next year’s election, Carlyle is being approached by anxious third-graders, already in campaign mode.

“When the third-graders say, ‘You know, Ms. Vincent, I just want to let you know I’m running for president,’ I say, ‘That’s great, you could be next mayor of Providence if you wanted, too.’ Telling students that they are the next generation of leaders is the heartbeat and the pulse of our school.”

She Teaches, She Tweets, and She Wants Her Students to Follow it All

In a California Farming Community, Students Grow More than Lettuce