Standing Up for Transgender Students

Trans students deserve a safe and affirming place to learn. Advocates from Teach For America's network are helping to make this happen. 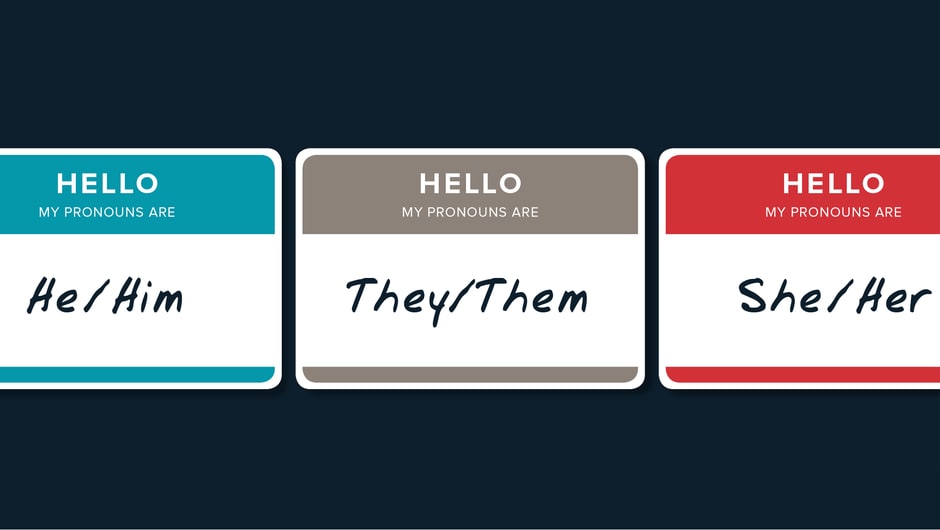 When Vanessa Ford’s youngest child started Pre-K nearly five years ago, it was a time of big transitions. Not least of which, starting the school year with a different name and gender identity.

Vanessa says that from a very young age, her daughter—who was assigned the male gender at birth—sent very clear signals that she was in fact, a girl. She preferred to wear dresses, and drew stick figures of herself as a girl. Most of all, she lit up and became a different person when her identity as a girl was affirmed.

There are about 1.4 million adults in the United States who currently identify themselves as transgender. Like Vanessa’s daughter, Ellie, their gender identity is different from the gender they were assigned at birth.

Vanessa and her husband worked closely with Ellie’s elementary school to develop a plan to make sure educators, staff, and other families at her school had the information they needed to ensure that Ellie was safe and supported through her transition to living openly as a girl. So far, Ellie is doing great. Vanessa says the school is a model for what a safe and inclusive learning environment can look like.

“First and foremost, Ellie can be her full self there. She is loved and supported for who she is,” Vanessa says.

When transgender and gender-expansive students feel safe and affirmed, they are more likely to thrive. Teachers, students, parents, and administrators all play important roles in creating this kind of inclusive environment in schools by seeking to understand the needs and perspectives of trans students.

The Reality for Many Transgender Students

Unfortunately, for many children who identify as transgender, or whose gender identity and expression falls outside the “boy/girl” binary, school is not a safe and affirming place.

Many trans students don’t feel safe “coming out” to their peers, fearing rejection and social stigmatization. As a result, many trans students withdraw socially, hoping to escape notice at school rather than flourish. A recent survey of trans and gender-expansive youth found that when trans students are forced to hide their gender identities, they are at risk of experiencing elevated mental health problems, including low self-esteem, depression, anxiety, self-harm, and suicide.

Students who do choose to be open about their trans identity are targeted for harassment, bullying, and discrimination at higher rates than their gender-conforming peers, even among those who identify as LGBQ.

Many trans students feel invisible and struggle to be authentically seen, especially when their gender identity, name, and preferred pronouns are not affirmed at school. Half of the transgender students who completed a 2015 national school climate survey reported that they were unable to use the name or pronoun in accordance with their gender.

Everyday routines that most students take for granted, such as which bathroom or locker room to choose, can be a huge source of stress for trans students when they are required to use the bathroom that does not match their gender identity. Presenting as a girl in a boy’s bathroom is not only uncomfortable, it's potentially unsafe. A study on transgender youth and school facilities found that 70 percent of transgender students avoided using the bathroom while at school because they felt unsafe and uncomfortable—which puts their health and wellbeing are at risk.

With the current administration's recent withdrawal of federal guidelines for how schools can develop and enforce policies to support transgender students, many trans students may now have more difficulty advocating for their safety.

“This is who I am and visibility is part of the game.”

Transgender Rights in Schools: My Vision for One Day 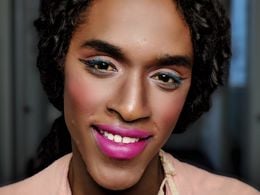 Learn how Alyxandra Ramsay (Miami-Dade '17), a first-grade teacher in South Florida, is advocating for equitable opportunities for transgender students and employees in her school district and beyond.

When a school does have policies in place that support and affirm a student’s gender identity, it can have a positive impact on transgender and gender-expansive students, as well as the school climate as a whole. This is especially true when parents, students, educators, and administrators are willing to work together to determine the best ways to create a safe and inclusive environment for all students.

Advocates are working to change the narrative for transgender students by normalizing their existence and fighting for their rights.

When Vanessa and her husband decided to share their daughter’s story, their hope was that it would give other families a sense of relief in knowing they weren’t alone. They also hoped to create a dialogue with other parents on how to support trans children.

“We really focused on our story as parents, how we listened to her versus her story, how she felt. We really tried to keep those two things separate,” Vanessa says.

The Fords connected with other families who were also learning how to best support their child’s transition. Soon after, they shared their story on national platforms, including op-eds in The Washington Post and ABC News, and were featured in the documentary Gender Revolution: A Journey With Katie Couric. The Ford’s "Stand with Gavin" video project gained support from people around the world who shared encouraging messages with Gavin Grimm, a transgender teen from Virginia who filed a lawsuit against his school board for adopting a discriminatory bathroom policy that segregates transgender students from their peers. The Fords also met with Betsey DeVos to get her support on behalf of trans youth after the administration rescinded federal guidance on protecting trans students' rights in schools.

Vanessa has spent her career in education in Washington, D.C., since she joined the D.C. Region corps in 2002. During that time she’s focused on teaching, curriculum development, and teacher training. Her experience raising a transgender child has led her to examine her own practices, and what it looks like to create a truly inclusive and affirming learning environment. She’s partnered with organizations such as GLSEN and the National Center for Transgender Equality (where she also serves as a board member) to share her family’s story and develop national workshops for educators and parents. 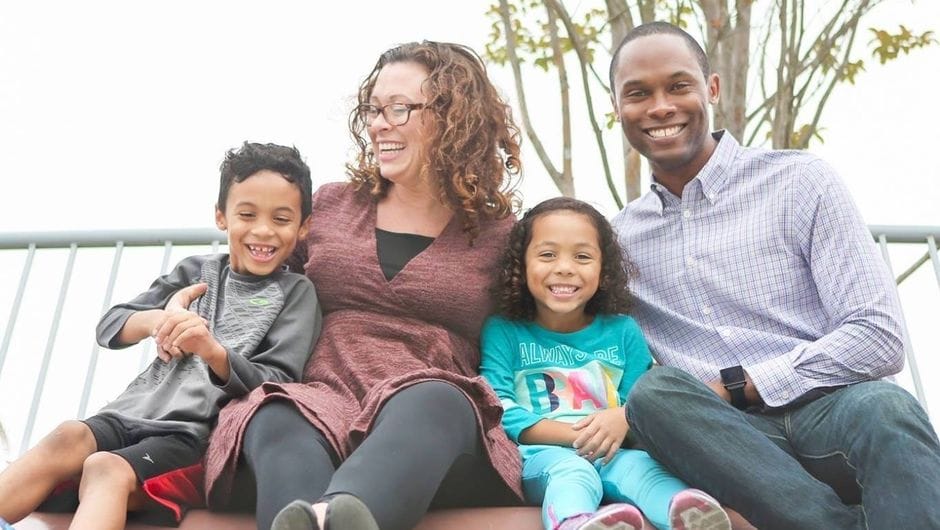 Vanessa Ford with her family.

Vanessa says the guidance she’s received through these partnerships has helped her hone in on four categories that schools need to focus on in order to build an inclusive environment for transgender and gender-nonconforming students: Educate, Affirm, Include, Interrupt.

1. Educate all staff in the school building, not just teachers and administrators. This includes bus drivers, cafeteria staff, janitors, and paraprofessional teachers. Vanessa says that all school staff play a role in looking out for students.

“Oftentimes it's going to be the cafeteria worker who knows that that child hasn't been coming for lunch,” she says.

2. Affirm students’ identities. This includes using a student’s preferred name and pronouns, outlining anti-bullying policies, and allowing students to use the restroom that is aligned with their gender identity. Vanessa recommends that schools do an audit of their school climate to figure out where they need to make changes.

3. Include LGBTQ+ people, perspectives, and history in the school’s curriculum.

4. Interrupt—students and adults—any time someone uses hurtful language or expressions, even if the person didn’t intend for their words to be harmful.

“If you hear something, you stop it immediately and use it as a teaching moment,” Vanessa says. “And if you’re trying to interrupt something bigger, like a policy, don't go it alone. You can be much more effective when you join others who are working towards the same mission.” 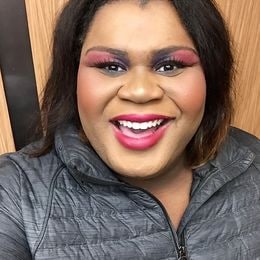 Alaine Jolicoeur is a 2016 Baltimore alum and advocates for trans inclusive policies on the Baltimore City LGBTQ+ commission.

Interrupting policies that impact transgender students is something Alaine Jolicoeur is familiar with. Alaine is an African-American transgender woman and taught history at Benjamin Franklin High School in Baltimore, Maryland, as a 2016 corps member. She currently serves on the Baltimore City LGBTQ+ commission and is a major force influencing policy for trans students in Baltimore city schools.

Alaine’s advocacy work has impacted students outside of schools as well. She also worked with the city council to introduce legislation requiring business in Baltimore to make single-stall restrooms gender-neutral. The bill passed successfully, and Baltimore became the third city, after Philadelphia and Washington, D.C., to enact similar progressive and inclusive legislation. 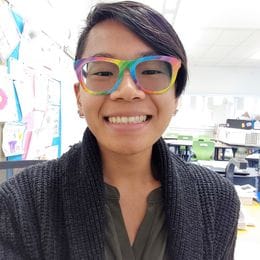 Tai Tran is a 2018 corps member and teaches 7th grade math and science in the Bay Area.

In many schools across the country, trans teachers risk their livelihood when making the choice to be their authentic selves at work. Yet every day, trans educators are taking brave steps to strengthen inclusivity in schools, starting in the classroom.

Tai Tran is a 2018 Bay Area corps member and teaches 7th-grade math and science. When she introduced herself to her class on the first day of school this year, she was very intentional about making her trans identity visible and approachable.

She wrote her name on the board, “Mx. Tran,” using the gender-neutral honorific, “Mx.” instead of Mr. or Ms. She also explained that she’s transgender and uses the pronouns “she, her, and hers.” Tai says the response from her students has been overwhelmingly positive.

“It's almost a relief to be able to come out to my students and clear up any misunderstandings right away,” Tai says. “I try to be super proactive and direct and create space for questions. This is who I am and visibility is part of the game.”

Tai says it’s important to bring her full self to the classroom—not only because it’s who she is, but because it positions her as a visible ally, especially for students who may be questioning their own gender identity. By coming out to her students, Tai says she opened a dialogue with her students on how to model inclusivity. Some of Tai’s students are now leading the school’s first-ever “rainbow alliance,” a club for LGBTQ+ students and allies, which Tai also supports.

Tai’s school team has also been supportive and open to building a more inclusive culture. She recently partnered with a local LGBTQ+ community center to create professional development for staff on California state laws about how to advocate for LGBTQ+ students. For some of her colleagues who had been teaching for more than eight years, it was the first time they had ever received such training. Tai says LGBTQ+ inclusive training is needed to empower teachers of all experiences to be more effective allies for LGBTQ+ students.

Tai says even small gestures can be very affirming for trans educators. During a team meeting, Tai suggested that all staff use their pronouns in their email signatures, as a way to affirm gender identities and avoid confusion. Her principal immediately got everyone on board.

“I thought that was a really great example of how school leadership can model inclusivity,” Tai says. “We still have a long way to go. But I feel, accepted here, my opinions matter, and my voice has power.”

These are are just a few of many resources available for supporting trans students and creating a more inclusive school environment.

How Schools Can Move Past Tolerance to Affirm LGBTQ+ Students