A Minneapolis-based publishing house is opening the door to the creative works of writers with disabilities. 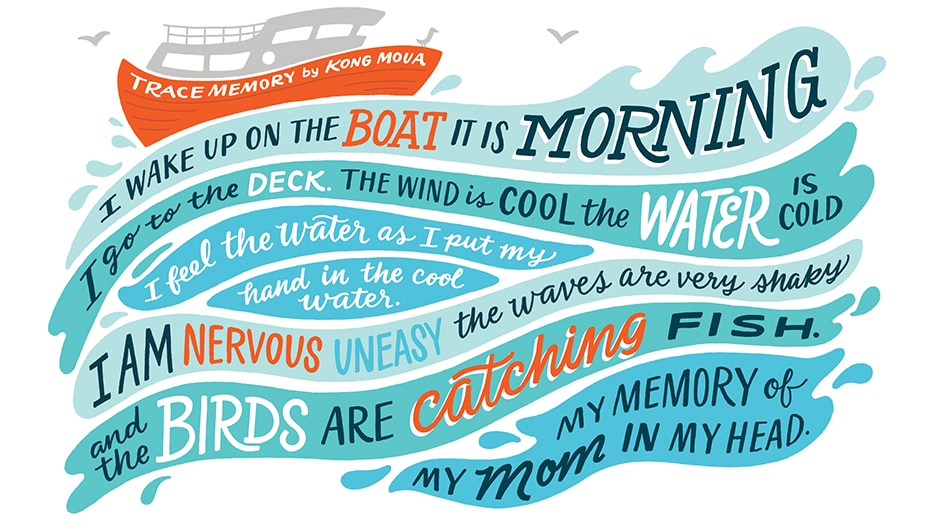 Listen to Kong Moua read a selection of his poetry.
Illustration by Lauri Johnston
Animation by Jake Allen

Writer Mary Ayetey, 27, takes her readers on extraordinary trips. She writes about a hayride that starts out as foreboding as any horror film and then ends, abruptly, happily. There’s a poem about pepper spray she got for Christmas when she expected cookbooks, and the time she imagined using it. Ayetey, who has autism and struggled as a student to write at all, developed a remarkable knack for combining literature with the element of surprise.

Ayetey publishes her work through Cow Tipping Press, a Minneapolis-based nonprofit founded by Bryan Boyce (South Dakota ’09) to share the creative writing—often extraordinarily creative—of adults who are disabled. Ayetey’s fellow writers at Cow Tipping live with a wide range of disabilities. Some have experienced brain trauma; some have Down syndrome; some, like Ayetey, have autism.

Cow Tipping Press leads the adult students in five-week writing courses taught by trained college students. At the close of each course, the press publishes a compilation of their best works.

At a recent release party reading at Wild Rumpus bookstore in Minneapolis, Ayetey shared her poem “Respect,” which was published in the compilation Aliens in the Group Home. The defiant piece builds to a last line that aims straight at her reader’s assumptions about autism: “What if there is nothing I can’t do?”

Boyce’s inspiration for Cow Tipping started with a related question: What if there is something Ayetey and others like her can do that another learner can’t?

When he was an English major at Grinnell College, Boyce labored over creative writing, trying to twist his brain into producing something unexpected. Then, on his breaks from school, he watched his younger brother Jay, who was born with a variety of developmental disabilities, turn out rhymes and stories with creative ease. “They were magical and inventive,” Boyce says, “better than anything I could write as an English major.”

But when he looked for literature or poetry by people like Jay, he only found texts about them: “reductive, ventriloquized portrayals” like Of Mice and Men, Flowers for Algernon, and The Curious Incident of the Dog in the Night-Time, he says. It felt like a huge loss—not just for the overlooked writers, but for a world of readers missing out on their work.

Boyce won funding from his college to run a pilot summer writing program for students like his brother. That work turned into his senior thesis and eventually into Cow Tipping Press. The name comes from one of the first poems the press published, and also because it fits the “playful, disruptive, mischievous” themes found in many of the writers’ work, he says.

The writing, Boyce says, is part of an emerging genre that mainstream publishers have ignored. And it’s beginning to find an audience. Educators around the U.S. have asked for copies of Cow Tipping books and can download a curriculum. Many of the teachers found Boyce through an article he wrote for the popular Teaching Tolerance website. Students at Carleton College in Minnesota read the works as part of an English class called Unwritten America.

Boyce aims for writers, in addition to becoming published authors, to develop self-advocacy skills and confidence. And he works with their teachers to become part of the movement to rethink disability and demand equity for all learners. Too often disabilities are seen only as problems to be fixed, he says, without recognizing them “as identities worth valuing.”

Since 2016, Cow Tipping has worked with more than 400 students-turned-authors and about 30 teachers, several of whom have gone on to become special educators or related professionals. In 2019, for the first time, three former students are co-teaching Cow Tipping classes.

Mary Ayetey is one of those teachers, often playing a small harp in class to ease her students’ anxieties. At a recent class on journalistic writing, Ayetey brought in a newspaper story about a memorial built for a tree in Nigeria. The tree had been the only one in a 250-mile radius before a drunk driver hit it, snapping its trunk. She saw something in the story that most teachers would never have considered: a way for students to talk about managing anger after losing something beloved, and to develop what she calls the “chill skills” they need to walk through the world differently.

Ayetey considers herself a role model: a published author who has battled many of the challenges and prejudices her students face. “I treat them with dignity and respect,” she says, raising her voice with each word. “I tell them you can write anything that’s on your mind.”

Boyce says that’s what’s been missing. Cow Tipping’s writers “can showcase how, sometimes, having a developmental disability makes you more advanced than someone without it,” he says. “That’s a game changer.”

Selections from The Best of Cow Tipping Press, volumes 1 and 2, published in 2018.

Authors produced these pieces in five-week writing courses. Teachers and personal care assistants help authors develop their ideas, but the content, grammar, and structure are their own.

Excerpt from “Survival” by Brad Kellar

“The Breakfast” by Dar Cieminski

the / most memorable food

and / scramble / eggs and sausage

on my Kindle Fire hd 6

It was Christmas last year. I thought I wanted cookbooks for Christmas, but instead I got pepperspray. It just looks mysterious and so strange. I’ve got to use it carefully, leave it at home and not let anyone know about it. It’s no toy it’s no prank it’s a test it’s self defense my stepdad says “emergencies only” he said emergencies only.

I was walking in the woods out at night. There was a strange guy stalking me and I turned around and pepperspray them. Then I ran off and call for help looking shocked. A future stepmother came up asks her “are you okay what happened?” I was calm saying “this guy tries to follow me” it was made out of red fire and it burns like red fire the guy burns like redfire.

For those interested in exploring more writing by people with disabilities, Cow Tipping Press founder Bryan Boyce recommends Plankton Dreams: What I Learned in Special Ed by Tito Rajarshi Mukhopadhyay. Mukhopadhyay, who has autism, writes a sort of anthropological study of a special-needs classroom in Texas. Boyce says, “It’s the person with the disability studying the teacher without one. It flips the script on its head.”