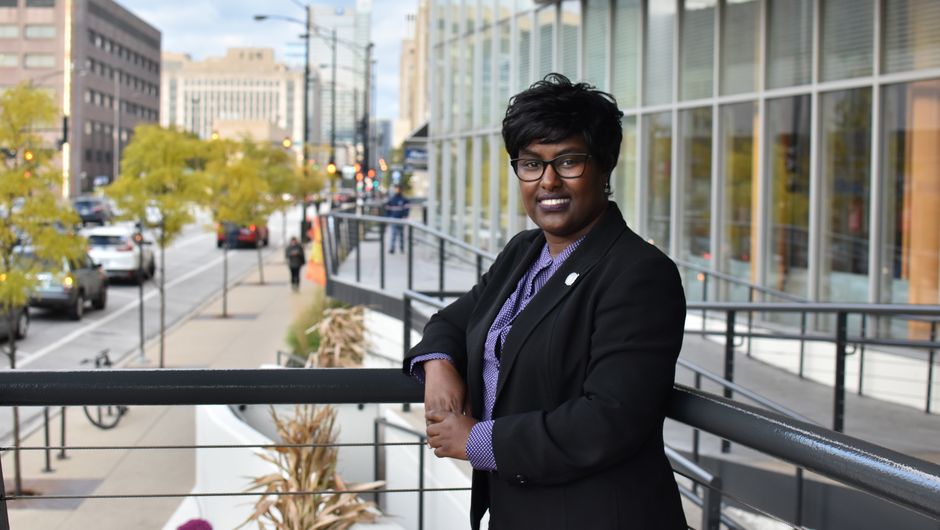 Principals have an incredible amount of responsibility. They manage staff, set the vision for school culture, organize professional development, and ensure everyone is working towards shared goals. But who helps principals? Who makes sure they are on track and using the right strategies? As deputy chief of schools for Chicago Public Schools, Natasha Patterson (New Orleans, '00) does exactly that.

Natasha never imagined a career in education. Growing up in rural Georgia, her family deeply impressed upon her the importance of service. “A motto in my family is ‘To whom much is given, much is required,’” Natasha says. In college, as she was considering applying to the Peace Corps, she was contacted by a Teach For America recruiter. “Teaching was a way for me to honor the educators who helped transform my life and a way for me to give back and serve others,” Natasha says. “It was a natural fit.”

Natasha taught second grade in New Orleans for two years. She actually listed Chicago as her first choice for the corps, though she’d never been to the city. “Chicago was a place I honestly felt called to,” Natasha says. Then, almost 10 years after joining the corps, Natasha saw a listing for a partnership between Teach For America Chicago-Northwest Indiana and Harvard’s Graduate School of Education, where participants would go through development to become school leaders in Chicago. “It was everything I wanted. An opportunity to develop myself, have a larger impact, and go to Chicago.”

Over the next five years, Natasha worked in Chicago Public Schools as both an assistant principal and a principal. Natasha was energized by the work, as it gave her deeper insight into the inequities she had seen play out in her classroom. “As a principal, I saw the system, structures, and policies that resulted in inequity,” she says. “As a teacher I could of course have an impact on this, but as a principal I could change policies and practices.” In addition to the countless hours she spent coaching and supporting her teachers, she also developed an advanced placement program at her school, and worked to increase the enrollment of black and Latinx students in dual credit classes. As principal, her school earned a Level 1+ rating, the highest rating in Chicago.

“Often when people think of equity they just think of resources. Obviously we need to push for more resources, but I want principals to think beyond that, to think of what systems and structures they have in place that inadvertently create inequity.”

Now, Natasha is taking everything she learned as a teacher and principal, and applying it to her new role as deputy chief of schools for Network 11. “This job allows me to use all of my previous experience—teaching, professional development, policy work, community engagement,” she says.

As deputy chief, she spends her days visiting schools and having debriefs with school leaders. Back at the office, she strategizes around development opportunities with her network team, which is made up of the network chief, data strategist, instructional support leaders, and district staff who help support diverse learners and social emotional learning. “When I was a principal, I struggled,” she says. “I learned a lot on the job, and so it’s really meaningful to now be a thought partner and coach and support principals’ instructional and leadership development,” she says. “I know supporting them will support their teachers, who will then support our students.”

A big priority in her work is making sure the network’s 29 principals are disrupting inequity. “At my core I’m an equity warrior,” she says. “Often when people think of equity they just think of resources. Obviously we need to push for more resources, but I want principals to think beyond that, to think of what systems and structures they have in place that inadvertently create inequity.”

When she looks back on her own development as a leader, she knows Teach For America has played an important part. “I have TFA to thank for me being an educator. But beyond that, some of the most meaningful development I’ve received has been through TFA,” she says. Beyond the partnership with Harvard, Natasha is now a participant in the Elevate Fellowship, a partnership with the University of Chicago Booth School of Business designed to prepare alumni to take on senior leadership roles in the civic and nonprofit space.

Looking back on the opportunities she’s been given and everything she’s accomplished in Chicago, Natasha’s glad she listened to that internal calling. “I’m living in my purpose,” she says. “Chicago is home.”