An alumni-led nonprofit, the South Ward Children’s Alliance, is the recipient of a U.S. Department of Education Promise Neighborhood $30 million grant. 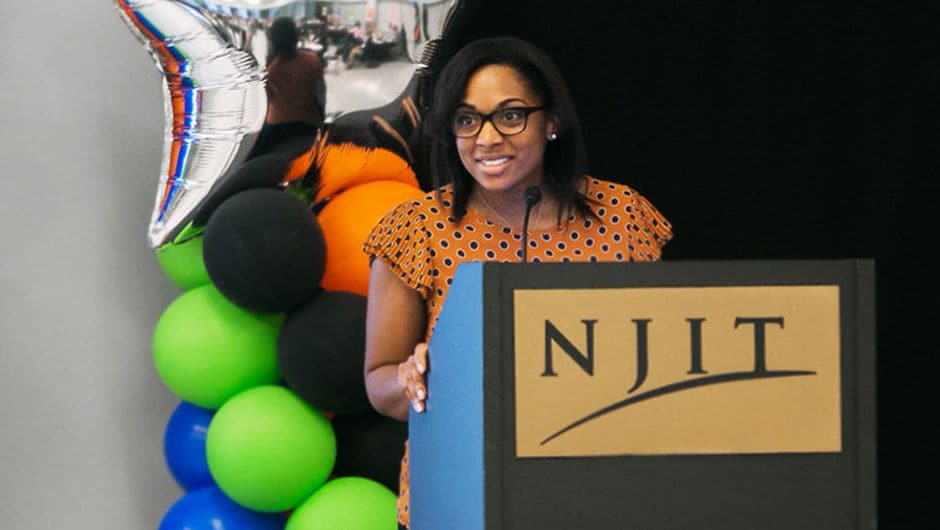 In a New Jersey neighborhood where futures can often be uncertain, Barbara Dixon-Neal (New Jersey ’07) is hoping to serve as a constant. As the first Executive Director of the South Ward Children’s Alliance (SWCA), she works with families and students to provide resources and support services not always accessible to residents of low-income communities.

Just two years into the job for Dixon-Neal and less than four years since SWCA’s start, the organization has received the prestigious Promise Neighborhood grant, a $30 million grant from the U.S. Department of Education given over five years. The grant increases the SWCA’s annual operating budget by a factor of nearly six.

With the infusion of new funds, SWCA will now be able to provide even more wraparound services to families in the South Ward area of Newark. “We want to be a part of this community and feel like we’re family. And now, we want to encourage even more people to come to us,” Dixon-Neal says.

A COMMUNITY THAT NEEDS MORE

Newark is a city of five wards, each with a distinct personality. The South Ward sits just west of Newark International Airport and comprises Clinton Hill, Dayton, and Weequahic Park. Known for its strong middle class in the mid-1900s, it’s now the poorest section of Newark.

Once home to U.S. Senator and former Newark mayor Cory Booker—who was hoping to have a “catalytic effect” on the neighborhood, according to the New York Times—the South Ward has experienced the hard times of many urban centers that were built on manufacturing. With a shrinking population and high rates of unemployment, the South Ward has limited access to crucial public resources.

“We want to be a part of this community and feel like we’re family. And now, we want to encourage even more people to come to us.”

In 2016, New York University (NYU) completed a thorough needs and segmentation analysis of the South Ward. Among many other findings, the analysis found adults in the community lack access to primary care physicians and show high rates of dissatisfaction with life, fear of crime, and desire to move elsewhere.

“Kindergartners met age-appropriate benchmarks less often than their Newark peers, and the gap widened during the school year,” the NYU analysis reported, citing a shortage of high-quality early childhood education opportunities and issues with school attendance.

Both public and private revitalization efforts have been underway in recent years. Modern housing developments have started to go up, high-performing school networks are enrolling more students, and local political leaders have brought some attention to the area. But in many ways, the efforts are not enough.

“The South Ward’s been left behind. It’s unfortunately one of the neighborhoods that’s just not been served by New Jersey,” Tahina Perez (New Jersey ’03), Managing Director of Teacher Leadership Development for TFA–New Jersey and a former teacher in the South Ward, says. 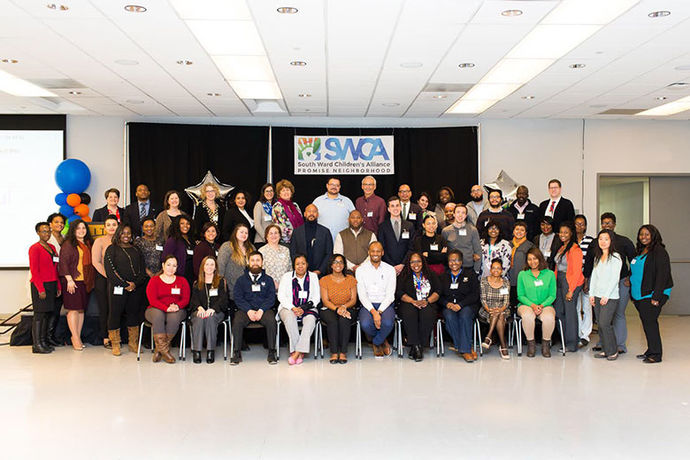 Dixon-Neal and Lee (front, center) were joined by dozens of community partners and advocates to officially launch its Promise Neighborhood work.

Lee opened BRICK’s first school, BRICK Avon, in fall 2010 and has continued to grow the nonprofit in the years since. In an effort to assist many of the BRICK Avon families with issues they face outside of school, Lee created SWCA in 2014. It’s envisioned as the “cradle-to-career” division of BRICK, providing a continuum of services to families and students.

SWCA provides some services in-house, such as its “Family College,” which develops skills of caregivers for young children. Yet a large portion of its work is coordinating with local and national agencies to address families’ specific needs. From nutritional support and medical help to school readiness and neighborhood safety, SWCA’s “Family Hub” serves as the case management division for families and finds solutions in partnership with other organizations in the area.

“Our big thing is family support,” Dixon-Neal says, noting that SWCA often works to stabilize families facing transition or crisis. The primary motivation of its services is to improve the academic outcomes of students in the South Ward.

“You could feel the energy. Barbara and Dominique were mobilizing and organizing our community in a way I’ve never seen.”

SWCA has exclusively relied on private donations since 2014. With a full-time staff of just three, the organization has been able to serve the South Ward in many ways, yet not nearly to the extent that the community needs. The Promise Neighborhood grant will allow SWCA to grow its staff and case workload, while also enabling it to become a more permanent fixture in the community.

A BRIGHTER FUTURE FOR THE SOUTH WARD

Established in 2010, the Promise Neighborhood program has given dozens of communities large grants totaling more than $500 million to improve the educational and developmental outcomes of children. The application process requires applicants to develop several strategies, detail the community partnerships they will establish, and describe their methods of evaluation.

Dixon-Neal says the process was rigorous and demanding. But reflecting on previous grant recipients and the other three Promise Neighborhood recipients this year—two of whom are colleges—makes Dixon-Neal especially proud. As a young organization that’s just starting to get its footing in the community, she’s overjoyed to be in such great company and to be able to serve the community where she’s worked since graduating college. 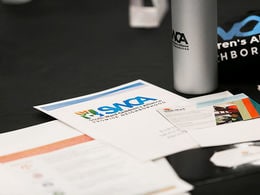 As an example of SWCA’s new partnerships, Dixon-Neal said the organization recently started working with Volunteer Lawyers for Justice of NJ, a legal aid service. With this partnership, it can bring lawyers to community events to help families get legal assistance they might not otherwise receive.

As the gravity of the $30 million is just starting to become real for SWCA, Dixon-Neal has wasted no time getting to work. In a community like the South Ward, she knows that students and families don’t have time to wait.

SWCA gathered its partners for an official launch of the Promise Neighborhood this month. With community leaders from more than 20 organizations around Newark, Dixon-Neal and Lee rallied attendees with inspirational and emotional statements. “You could feel the energy. Barbara and Dominique were mobilizing and organizing our community in a way I’ve never seen,” Perez said about the kick-off.

While the grant will by no means address all of the South Ward’s needs at once, it will hopefully start to rewrite the narrative of a distressed community. With more educational opportunities for thousands of young students and better resources for caregivers, the effects of the Promise Neighborhood grant could be seen in future generations. And Dixon-Neal hopes that SWCA will be there to witness it. “We want to be with them for long term,” she says. “I want to know where the babies I’m working with now are in 20 years.” 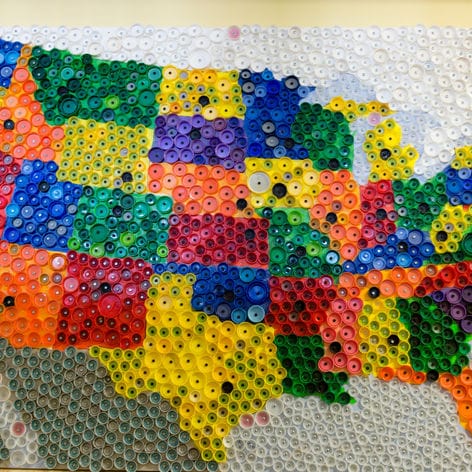 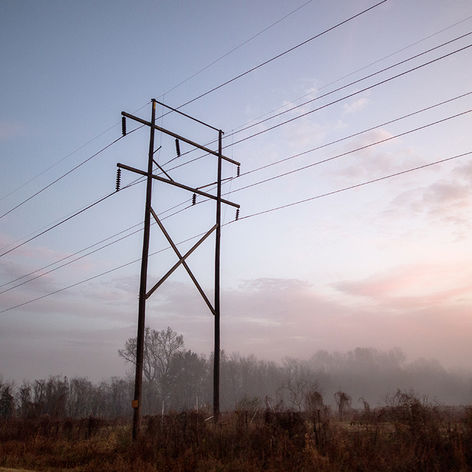 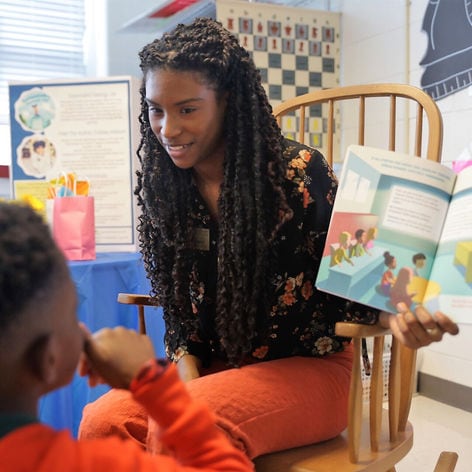 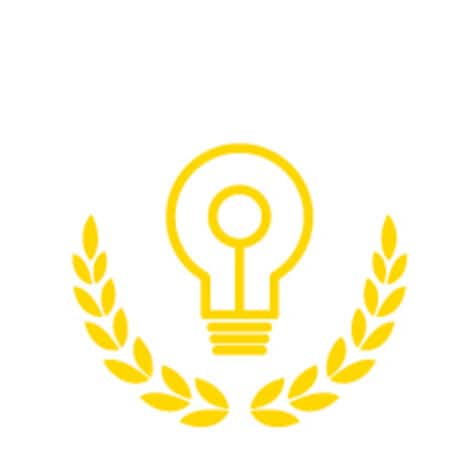