Team Rhode Island Goes For Gold in the Special Olympics

The points this unified basketball team puts on a scoreboard are far from their most impressive feat. That would be the friendships made on the court.

A “unified” sports team is one where students with intellectual disabilities, called “athletes,” play alongside students without (they’re called “partners”).

At Mount Pleasant High School in Providence, Rhode Island, athletes and partners on the unified team are school stars. Their team has been chosen to represent the state at this summer’s Special Olympics in Seattle, the first time that honor in Rhode Island has gone to a high school. At a recent practice, the Mt. Pleasant gym rang with laughter and the squeaking of sneakers on the court. After eight hours of teaching English to rambunctious ninth graders, Coach Zac Pinto (Rhode Island ’11) was laughing as loudly as his players. 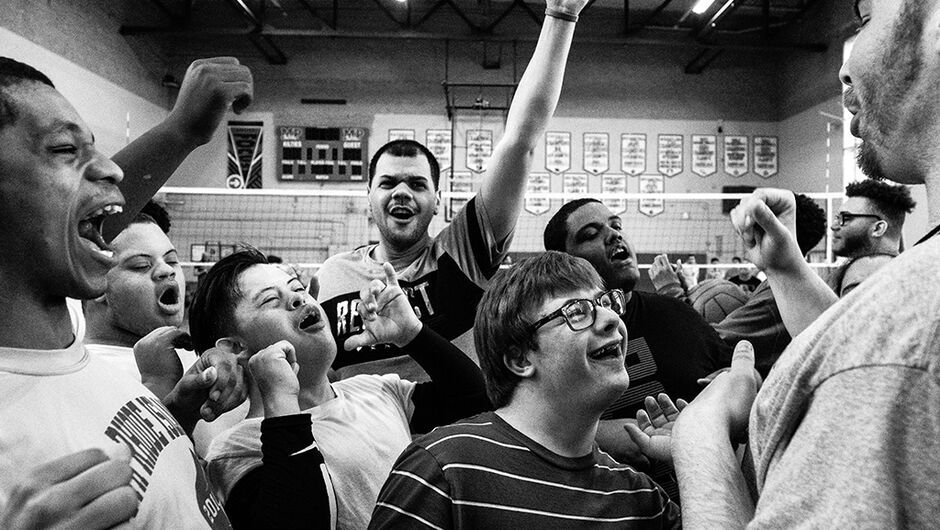 He started the unified team as a corps member six years ago, and still remembers that bruising first season when they lost all but one game. Since then, the team has become known for its outstanding sportsmanship and fellowship between athletes and partners. Pinto will accompany six athletes and four partners to Seattle. He’s been coaching some of these players for their entire high school careers. It’s one reason he’s still teaching at his placement school after seven years: Once he gets to know his players as freshmen, how can he move on before they do? 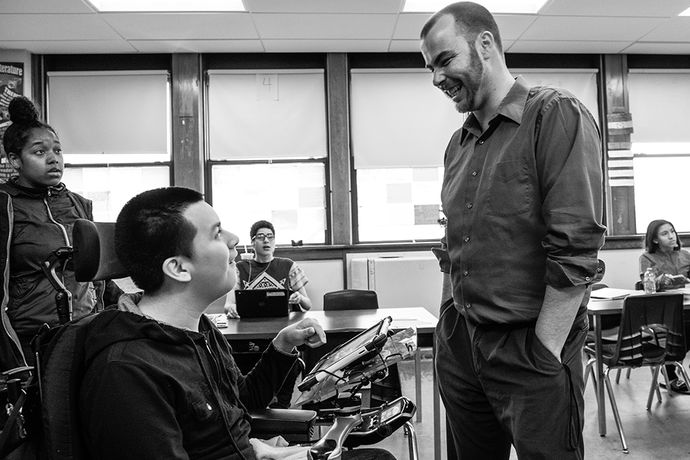 Close your eyes in Pinto’s classroom and you might imagine you’re on a basketball court, hearing him call a play. He bounds around, exhorting at a constant pitch of excitement. In fact, he’s trying to explain iambic pentameter. Maybe it’s his style that convinces one student after another to take off their (forbidden) headphones and begin reciting lines from Shakespeare’s Romeo and Juliet. 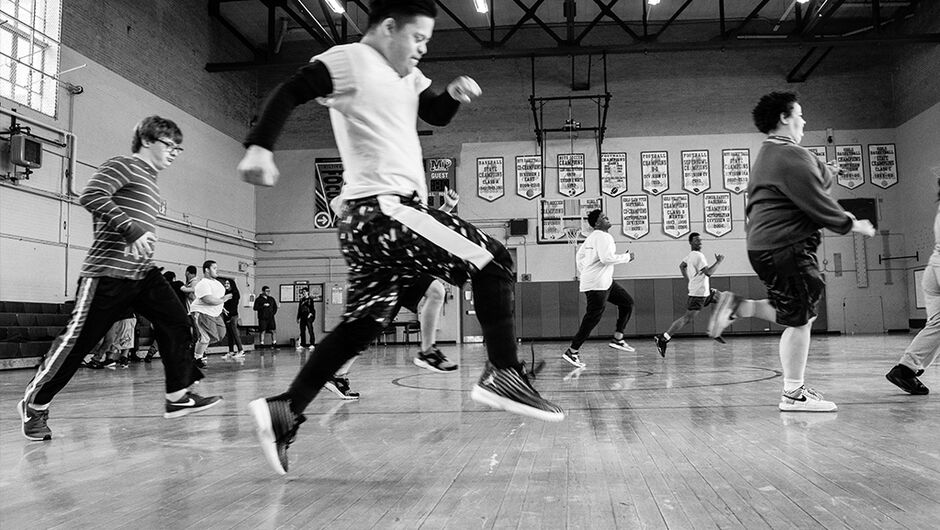 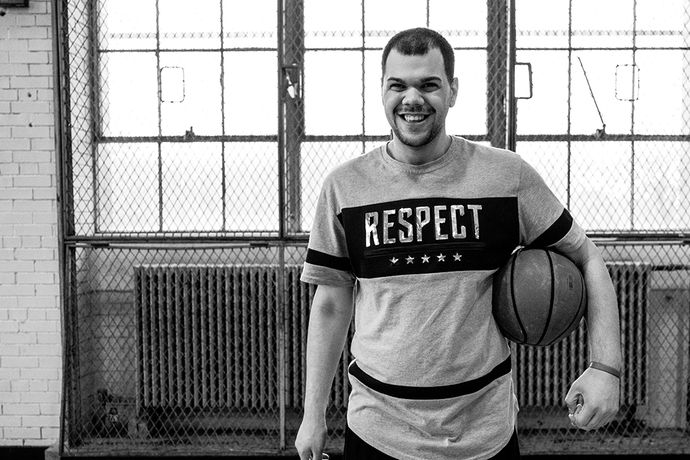 Raymond “Big Tuna” Arciliares, 21, is the team’s muscle, Pinto says, and a big part of the reason the team is Special Olympics-bound. He’s an entertainer; when he hears the distant beats of a reggaeton song, he dances. He takes the game seriously, but cares about more than putting up points. During last year’s state championship game, Raymond had a clear line to the hoop, but he saw, standing off to the side, a fellow athlete who doesn’t score often. Raymond stopped, placed the ball in his teammate’s hands, and let him take the shot. Pinto says, “That’s just Ray.” 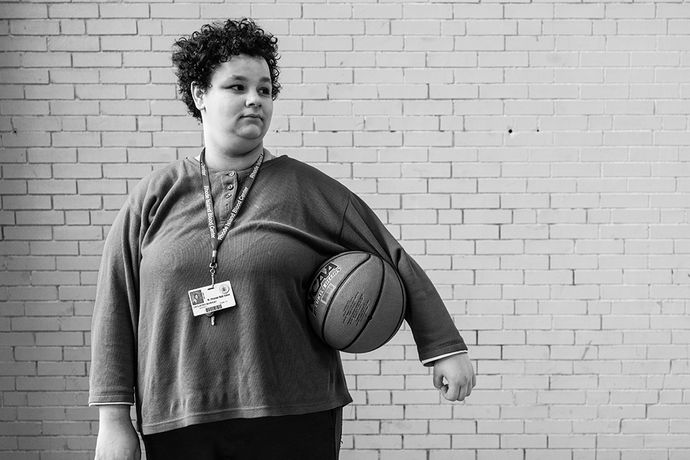 Yellow, green, blue: Jaylayah “Jay Jay” Murray, 19, keeps her nails colorful and bright, like her personality. “She’s the mom of the team,” Pinto says. “I couldn’t do a lot of this without her.” Jaylayah isn’t the fastest athlete, but she’s tops at team spirit. And she knows it. Jaylayah describes herself as “funny, helpful, and caring.” She likes helping Pinto on the sidelines. “He’s a good guy,” she says. “Lovable. He makes us laugh.” 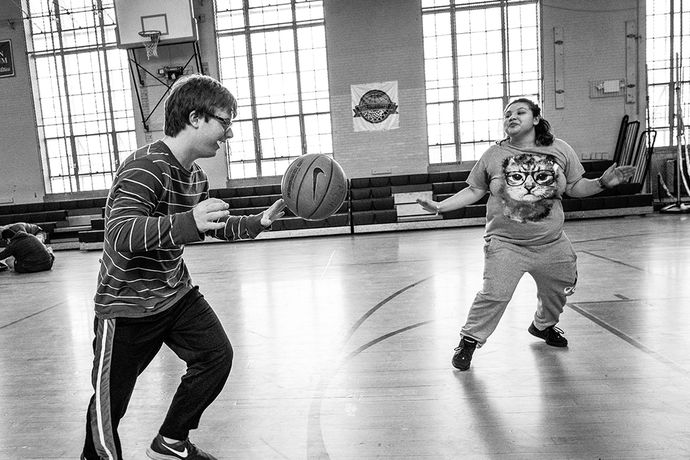 This is the fourth year Cassiana Fuller, 19 (practicing with Ronen Kadmon, 18), has played unified basketball. She’s one of the more reserved players, not one to lead a chant. “But when she guards, she gets under her opponent’s skin because she stays close by,” Pinto says. “I love that about her.” Her shooting form is untraditional. She brings the ball straight behind her head, then launches it upward toward the net. “But she makes it, so I’m not going to change her form now,” Pinto says. Having never left Rhode Island, Cassiana is excited for her chance to “see the world.” 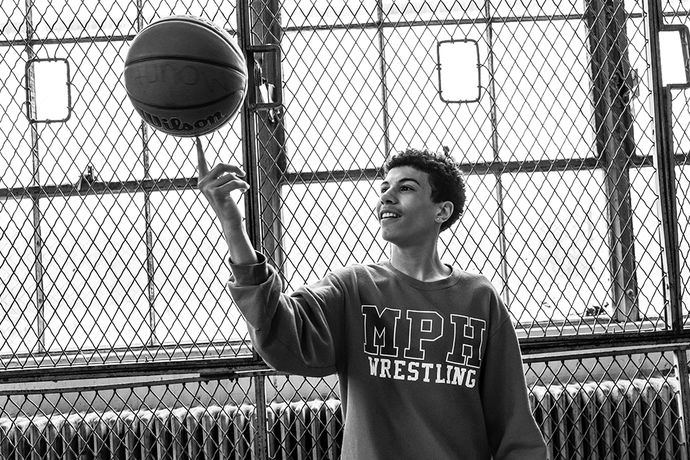 Last year, Moises Flores, 17, volunteered with the unified basketball team to knock out some mandatory volunteer hours. He became fast friends with an athlete, Charles “Chuck” Fontes, 19 (seated to the right of Jaylayah on the second riser row, photo below). Now Moises is a partner playing alongside Charles because he wants to protect his friend from partners on opposing teams who can get “mad aggressive.” Charles is one of the most popular students at school, gathering high fives and handshakes down every hallway. He doesn’t pay too much attention to all that: “Win. That’s all I want to do. Win at basketball.”

Christopher Cotto, 18, (center on the risers in white t-shirt) spends hours at home watching his basketball idol, Michael Jordan, on YouTube. If emulating great players’ athleticism is the goal, then Christopher is on track. He’s also on the school’s unified weightlifting team (with his teammate Jaylayah), and he’s a member of the varsity wrestling team. “I get stronger every year,” Christopher says. Before he steps on any court or mat, he tells himself, “Try your best. Be the best.” 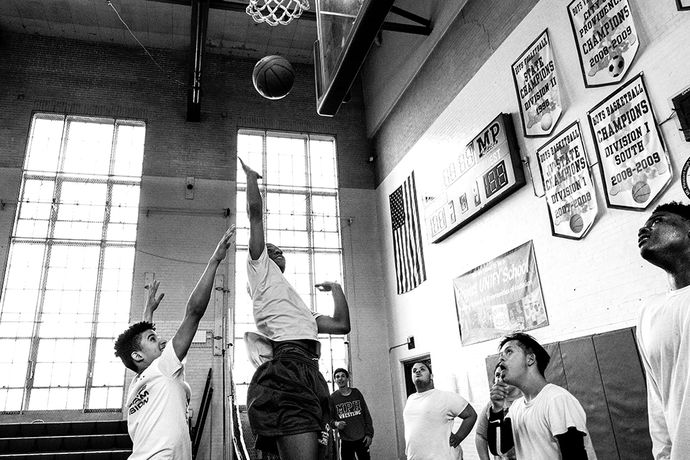 When Maurice “Moe Moe” Johnson, 19, makes a jump shot, the arc looks like that of a rainbow. When Pinto says as much to him, he smiles. “He likes to hear he did the right thing,” Pinto says. “He’s our most athletic, fastest player.” Maurice asked to join the popular team for four years. Now, in his first year, he’ll play on a world stage, showing off his rainbow arcs on ESPN. 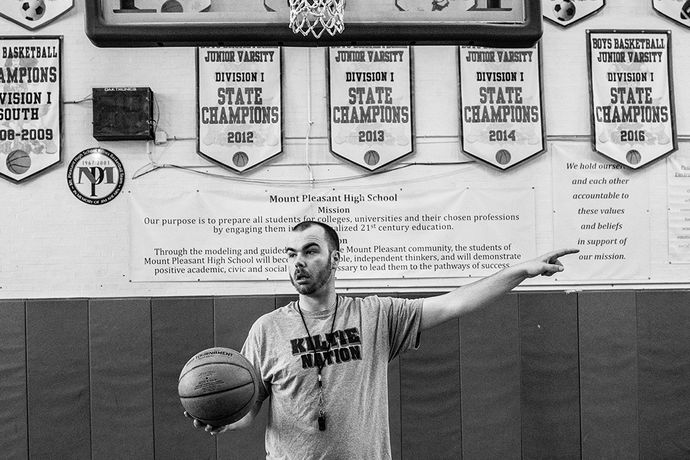 There are 19 players on the team, but only 10 can go to the Special Olympics. It was a hard call: Who will move into the Olympic Village and who will root from home? Each player is part of the reason the Special Olympics committee selected Mt. Pleasant, and if he could, Pinto would take them all. But he knows that next year, and the year after, there are more chances for the team to be great. “I feel like this is where I belong,” Pinto says. “This is my home.”