Saving the World Could Start at School

Kids are all in to protect nature and life on Spaceship Earth. Are we?

There’s a word for the turning point when humans might be able to steer away from climate catastrophe. The term for that juncture—when the levels of greenhouse gases in the atmosphere stop rising and start to decline—is “drawdown.”

Elizabeth (Sowatzke) Bagley (S. Louisiana ’02) recently became the education leader for the nonprofit organization Project Drawdown. When I asked her not long ago if she really believes it’s possible we’ll reach drawdown in her lifetime, there was a slight pause over the phone. Then she responded, definitively and cheerfully, “Yup!”

Bagley and I live in the same state of California. Escalating rounds of climate-change-intensified wildfires and droughts here feel increasingly threatening. But in our first conversation, Bagley introduced me to the term “stubborn optimism.” It defines how she approaches her work, whether that’s recording a series of 15 five-minute video lessons for LinkedIn Learning called “The Employee’s Guide to Sustainability” or advising schools like those in West Contra Costa, California, on how to reduce their carbon footprint. (Read on for four ways you can do this in your school district.)

It’s all about getting people to talk about solutions and take the first step. “Find the thing that’s in your control and start there,” she says. Then “celebrate the bright spots, the hope spots, so we can inspire more action.”

Now, as director of Drawdown Learn at Project Drawdown, Bagley’s goal is to shift the conversation about climate change from problems to solutions, from competition to collaboration, and from fear to hope. She will take the best research on solutions to climate change and translate those to teachers, policymakers, business leaders, and designers of experiences at museums, zoos, and aquariums.

But how? That’s the question that has occupied Bagley in her two decades as an environmental educator, most recently while designing experiences for the 1.5 million visitors who come to the California Academy of Sciences in San Francisco each year. “I think a lot about how to make invisible concepts visible,” she says.

Don’t tell people that eating beef is bad for the planet; show them how much water it takes to produce a quarter-pound burger by filling a hot tub. Bagley says, “If a car was pooping out a 1-pound block of carbon every time we drove it a mile, maybe we’d choose to ride our bike instead.”

“If there was ever a time to talk about the possibility of a coordinated global change in how humans interact with nature, it's now.”

Bagley began her career teaching middle school and high school science through the corps. But even before that, the farm where she grew up in western Wisconsin was the inspiration for her optimism.

Her parents did regenerative farming “before it was a thing,” she says, managing the land for “more good, instead of just doing less harm.” They sustainably raised sheep, goats, guinea hens from West Africa, and long-haired cattle from Scotland, grazing their animals in small patches to let the grass regrow elsewhere. Bagley would step off her school bus, smell the lilacs in the spring and the pungent barn year-round, and see the sheep and goats eating the low grass, the cows eating the tall grass, and the guinea hens eating the ticks off the livestock. The farm “taught me a lot about the interconnectedness of systems, and the connection between humans and those systems,” she says.

She spent time as a naturalist in Glacier National Park, designed science-based video games for LeapFrog, and earned double Ph.D.s at the University of Wisconsin while researching how video games can encourage systems thinking about environmental topics. At every step of her career, she’s focused on making scientific research relevant and relatable to inspire people to take action.

Even the pandemic has confirmed what she’s always believed: that people can work collectively to solve huge, systemic problems. “The whole world has shifted its behavior in a couple of weeks,” she observed in early April. “If there was ever a time to talk about the possibility of a coordinated global change in how humans interact with nature, it’s now.”

Here's how to begin:

Can a School Reach Drawdown?

Educational institutions (including K-12 and higher education) account for about 11% of U.S. buildings’ energy consumption and 4% of the nation’s carbon emissions. One recent study suggested that if schools went completely solar, they could reduce their carbon footprint by 28%.

That’s a radical change goal. How about taking first steps? By building climate change solutions into their operations, incorporating real-world systems-change projects into their curriculum, and cultivating students as leaders for climate action, schools can be engines that get the globe to drawdown.

“Find the thing that's in your control and start there.”

Problem: The Department of Energy estimates that K-12 schools spend more than $6 billion every year on power. In reviewing her local school district’s budget, Bagley noted that electricity and gas are the second largest expenditures after salaries. Imagine if schools could save money—or even make money by selling surplus power—while reducing greenhouse gas emissions and offering students learning opportunities?

Solution 1: Have students research your school’s energy sources, then ask your energy company to opt into 100% renewable. If the company has no renewable options, ask why not. Maybe it needs to fill a quota and your school can tip the balance.

Want to take the next step? Put your school on a microgrid. Our energy system is built on huge citywide grids powered by large power plants. Energy gets lost and wasted at every transmission point, and the whole grid comes down when disasters (like wildfires) strike.

Military bases, college campuses, and industries are now doing what rural communities in Nigeria do, Bagley says. They build on sustainable, flexible, efficient microgrids that power one or a few buildings using solar power, biomass, or wind.

How to sell it to your school board: Have your students recreate the “power Tetris game” that Bagley’s grad students invented. Using data from your energy company, create a graph that shows the ebb and flow of your school’s power usage. Then, to show how renewable sources could work, have players arrange on the graph Tretis pieces that represent different types of energy.

Solution 2: Get efficient: The Department of Energy estimates that at least one-fourth of a school’s energy costs could be cut by smarter management. Seattle Public Schools was able to save $20,000 a year just by turning off the lights in their school vending machines. Other low-hanging fruit: Swap incandescent lights for LEDs, and unplug appliances at nights and on weekends.

How to sell it to your school board: Have your student climate-change advocates hook two strings of holiday lights—one string of incandescent bulbs and one of LED bulbs—to two hand-cranked generators. Then lead a demonstration at a school board meeting. It will take a board member half a crank to power the LED lights, but “the buffest person will get tired trying to power the incandescent lights,” Bagley says.

“If your energy company doesn't have renewable energy, ask 'why not?'” 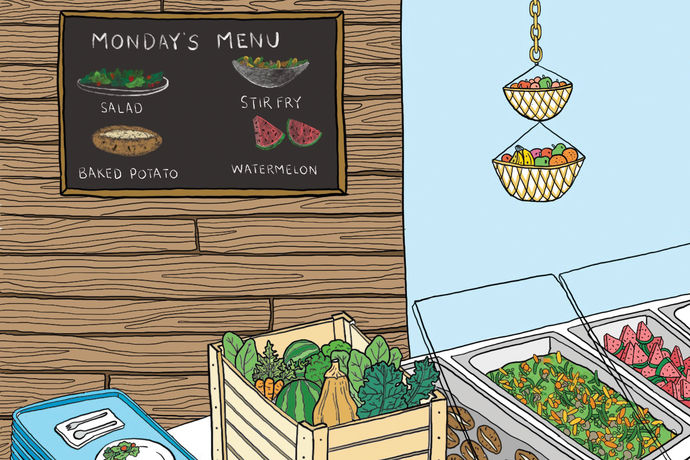 It takes 346 gallons of water and 4 pounds of heat-trapping greenhouse gas emissions to produce one quarter-pound serving of ground beef. That’s equal to one full hot tub and a 6.7-mile drive in your car to make one hamburger. Compare that to a serving of spinach, which requires 6 gallons of water to produce and creates almost no greenhouse gas emissions. Cattle farming is also the leading cause of tropical deforestation. Chew on that.

Solution 1:  “If schools cut all the beef out of their menus,” Bagley says, “the impact would be huge.” To start, you could join the thousands of schools that participate in Meatless Mondays. Or be like Oakland Unified School District, which reduced its meat purchases by 30% by requiring its lunch menu to include blended meat-and-veggie and veggie-only options.

How to sell this idea: Take two boxes and wrap one with images of a burger and the other with images of spinach. Then put weights in the boxes that equal the amount of greenhouse gas emitted in the production of each. The burger box will weigh 4 pounds. The spinach box will be empty.

Your students could produce flashcards to quiz decision-makers on how much water it takes to produce one serving of different foods. Bagley designed similar cards for an interactive exhibit at the Academy of Sciences. She “had to stop using those because they made people feel guilty.” 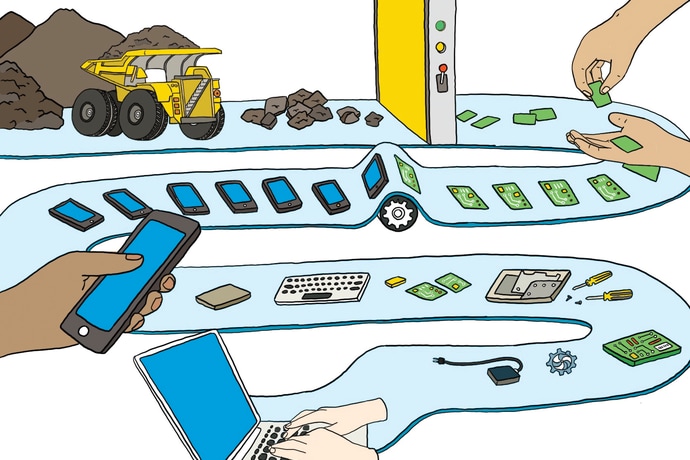 Problem: E-waste—mainly discarded electronics—is the fastest growing waste stream on Earth. The world produces 50 million tons of e-waste each year, more than 13 pounds per person on the planet. Its value is greater than the GDP of most countries: $62.5 billion. Hidden in that e-waste is as much as 7% of the world’s gold. Globally, just 20% of this waste is formally recycled. When schools unproperly dispose of old electronics, they can release toxic heavy metals into soil and water.

Solution 1: The trick with anything—but especially tech and electronics—is to extend its lifespan as long as possible. Put your students to work exploring if refurbished tech can stand in for new or if old tech can work on a new cloud-based platform. Recycle, donate, or sell e-waste through an authorized buyback program.

How to sell this idea: For whoever needs to be persuaded, students could creatively illustrate the life cycle of a mobile phone in three phases. It’s born in the mining and manufacturing stage; it’s alive in the useful stage; and it dies when it’s discarded or recycled. Then let them invite decision-makers to guess which stage uses the most energy.

Bagley says most people guess stage two, when you’re plugging in and charging your phone. But it’s stage one when the most CO2 is emitted, through mining and manufacturing devices. And those “sunk” emissions are wasted when you throw away a still-working phone, tablet, or any e-device.