In the Fight for Systems Change, Two Big Wins

In Illinois and Minnesota, advocates for major shifts in education policy are celebrating victories that were a long time coming.

Few policy issues vex educators more than too little funding and too few excellent teachers. But in Illinois and Minnesota, advocates and policymakers, including many Teach For America alumni, have notched hard-fought policy wins.

In Illinois, a large coalition led the campaign to create and enact a new state-level school funding formula to replace one deemed to be the most inequitable in the nation by The Education Trust, a nonpartisan national think tank. According to the Trust’s data, Illinois’s nearly 20-year-old formula resulted in high-poverty school districts receiving 19 percent less in state and local dollars than low-poverty districts. Going forward, the balance will shift as the state factors in each district’s property tax revenue and specific needs.

In Minnesota, more than seven years of advocacy and an eventual lawsuit led to recent legislation opening the door to more—and more diverse—teachers getting licensed to teach in the state. The law’s proponents say the change to licensing practices will help shrink teacher shortages that plague rural districts and schools that serve high percentages of students from low-income backgrounds.

Each of the changes took years of advocacy, coalition-building, and an accumulation of small wins that rarely make headlines. The results could be game-changing for kids. Here’s a brief look at how they came to be.

After seven years teaching in Texas, Aberdeen Rodriguez (R.G.V. ’07) and her family were ready to move home to Minnesota. With years of strong reviews as a full-time, fully licensed English and ESL teacher, she anticipated a smooth transition into a Minnesota classroom. But a series of attempts with the state’s board of teaching led eventually to an email letting her know she’d need additional coursework and a semester of unpaid student teaching experience.

“I was expecting to provide evidence, but when I was asked to student teach, that felt like an insult,” she says. Rodriguez considered giving up. 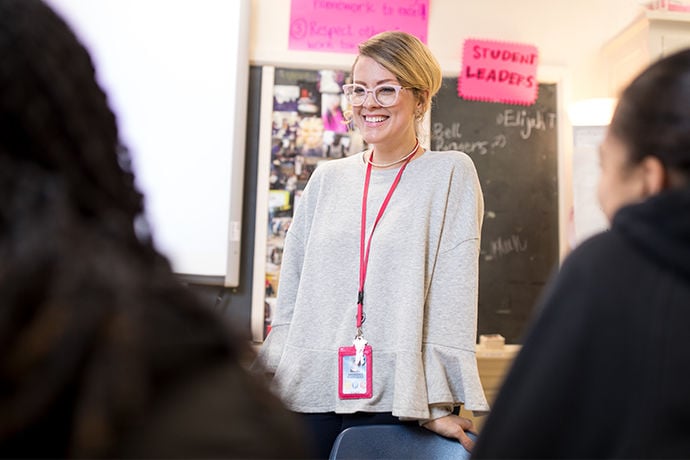 While Kyrra Rankine (N.Y. ’99) was managing alumni affairs for Teach For America Twin Cities, she and her team worked with dozens of alums in Rodriguez’s situation. They learned quickly that transferring an out-of-state teaching license to Minnesota was difficult, time-consuming, and often impossible unless teachers spent thousands of dollars on coursework at in-state schools.

What originated decades ago as the state’s attempt to manage teacher quality by preferencing local, traditional training resulted in an overwhelmingly white teaching force, Rankine says. (Only 4 percent of Minnesota teachers are non-white, compared to 31 percent of the state’s students.) “It has never worked for our kids of color,” Rankine says, noting that Minnesota schools have some of the highest racial achievement gaps in the nation.

Over the course of five years, Rankine spent hundreds of hours advocating for individual teacher candidates with Minnesota’s Board of Teaching and Department of Education. In 2015, Rodriguez joined a class-action lawsuit against the Board of Teaching along with 10 other teachers, six of whom were Teach For America alumni. Daniel Sellers (E.N.C. ’06) supported the lawsuit while advocating for legislative change as director of two local education advocacy organizations, first MinnCAN (part of the 50CANnetwork) then EdAllies.

“In Minnesota, only 4 percent of teachers are non-white, compared to 31 percent of students.”

In 2016, an independent state auditor slammed the state licensure system and recommended an overhaul. Then in May 2017, the state legislature passed a law revamping the system. The new approach, influenced by Sellers and his team at EdAllies, streamlines the process for out-of-state teachers while also making it simpler for non-traditional candidates, such as classroom aides, to become teachers. The new rules are scheduled to take effect in July.

After joining the lawsuit, Rodriguez received her license. She’s now the English department chair at Thomas Edison High School in Minneapolis, where she also sits on the school’s instructional leadership team. Because of her struggle, she has become active with the Minnesota chapter of Educators for Excellence, an organization formed to give teachers a voice in policy decisions.

In Illinois, the Battle for Fairer Funding

In Chicago, Acasia Wilson Feinberg (Phoenix ’02) hosted a “house meeting” in early 2014, gathering neighbors and friends to discuss what education issues felt most pressing to them. Wilson Feinberg was a member of Leadership for Educational Equity (LEE), an organization supporting Teach For America alumni and corps members acting to end educational inequity. From meetings like hers, a cohort emerged eager to challenge what they considered a state funding formula that favored wealthy districts while starving high-poverty districts.

The group coalesced under the umbrella of Illinois for Educational Equity (ILEE). Members soon joined forces with Advance Illinois, which had been working since 2013 to promote a fairer funding formula. Members of both groups formed a growing coalition of people willing to engage legislators and campaign door to door for the cause. In 2015, Wilson Feinberg became the executive director of the Chicago chapter of Educators for Excellence. Its members joined the coalition as well.

In the meantime, interest groups including the Illinois Network of Charter Schools had spent years fighting for charter per-pupil spending to equal that of traditional public schools. In 2015, Andrew Broy (E.N.C. ’95), the network’s president since 2010, saw an opportunity to work with the Advance Illinois coalition to ensure that charter funding equity was included in the final legislative package.

The broad-based groups combined the voices of thousands of teachers, school leaders, parents, and activists, all primed to engage with state lawmakers. Over the course of more than a year of campaigning in person and on social media, the bipartisan support proved enough to convince legislators. In August, they passed a bill changing the school funding formula and equalizing per-pupil charter funding.

Questions remain about how Illinois will pay for the funding changes, estimated to cost at least $3.5 billion over the next decade. And it will take some time before teachers feel the impact in their classrooms, particularly in Chicago, where much of the early money is expected to go toward saving teacher pensions. Still, Wilson Feinberg gives the legislation a B+ and says this school year is the first in many when Chicago teachers don’t fear layoffs. “Our funding structure in Illinois was the most regressive in the country,” she says. “Finally, that has changed.”

All Teach For America corps members and alumni are eligible to become members of Leadership For Educational Equity (LEE), a non-partisan, non-profit leadership development organization working to support Teach For America corps members and alumni who are taking action to end educational inequity. Through one-on-one coaching, fellowships, workshops, and resources, LEE works to develop and inspire leaders individually and collectively, across all disciplines, to engage civically within their communities and across the nation. If you’re interested in joining LEE and exploring ways to serve in your community, visit educationalequity.org/oneday.

Interested in taking advantage of Minnesota’s new licensure laws? Look into Teach For America Twin Cities’ “Choose the Twin Cities” weekend, March 2-3, connecting prospective out-of-state teachers with potential employers for the 2018-19 school year. The weekend also includes sessions with leaders from across the educational spectrum as well as opportunities to network with local alumni and community members. Register here or contact Mary Koslig.