It started with some concerned women and a one-penny meal in Philadelphia.

When the country began to understand that the coronavirus would shut down schools, one of the first alarms raised had nothing to do with instruction. Without school, how would kids eat?

About 22 million children in the U.S. receive daily free or low-cost lunches through the National School Lunch Program (and another 8 million buy full-priced lunches). As this issue went to press, surveys showed hunger spreading, with kids not getting enough to eat in one of five families. School kitchen crews continued to report to work and school systems continued to feed kids (and, in some communities, families), even without guarantees that the federal government will reimburse them.

In April, Los Angeles Unified school board member Nick Melvoin told alumni (in a virtual forum hosted by Leadership for Educational Equity) that the L.A. school system was “running the largest food bank in the country, serving half a million meals a day.” Melvoin (L.A. ’08) described how the U.S. Department of Agriculture, which administers school lunch, has temporarily relaxed its “congregant eating” requirements to allow students to take meals home. He called for that limitation and others to be waived permanently.

How did the school cafeteria become a nutritional lifeline for American families? The school lunch program was formally created by Congress after World War II, but the history goes back much further.

When compulsory education became standard in most states towards the end of the 19th century, social reformers began to recognize the need to feed these new students, many living in poverty. In 1894, Philadelphia began serving one-penny lunches, the first major city to institute a school lunch program. Boston came next. In both cities, private welfare organizations led the way. School districts formally adopted school lunch programs after they saw the success of pilot programs spearheaded by concerned citizens (including many pre-suffrage women’s political organizations). The practice soon became common in large cities.

As the Great Depression deepened in the 1930s, millions of Americans were out of work, farmers struggled to sell their products, and kids, of course, still needed to eat. And so, school lunches became one part of the New Deal. The government bought up surplus food and hired thousands of women to cook and serve it to students. By 1941, every state, plus Washington, D.C., and Puerto Rico, had a school lunch program in place.

Congress passed the National School Lunch Act in 1946, replacing the ad hoc programs of the Depression era and earlier with the standardized, federally regulated school lunch program that still exists today. In 1966, as part of President Lyndon B. Johnson’s War on Poverty, the Child Nutrition Act expanded subsidies for low-income children and created school breakfast programs. A 1968 National School Lunch Act amendment created the first summer meals program for when school is not in session. (Today only about 4 million students get free or reduced-price summer meals, far below the 12 million breakfasts and 22 million lunches served free or at reduced price during the school year.)

Support for the National School Lunch Act was not unanimous, though the divide did not neatly align to today’s partisan split. Oklahoma Republican Representative Ross Rizley warned, “I would hate ever to see it come to the place in this government where we just fed kids for the purpose of feeding them, whether they needed it or not.” Other conservatives, like Georgia Democratic Senator Richard Russell, supported the bill in the interests of Cold War-era national security.

In 1981, the Reagan Administration cut federal school meals funding for the first time since the program’s inception, by almost $1.5 billion. Portions shrank, prices rose, and items like ketchup and pickle relish were (briefly) declared “vegetables” under modified nutritional standards. To save money, many districts began to outsource meal production to large corporate contractors, an arrangement that’s still widespread today. Later, in the 1990s, fast food restaurants were allowed to sell their products in public school cafeterias for the first time. 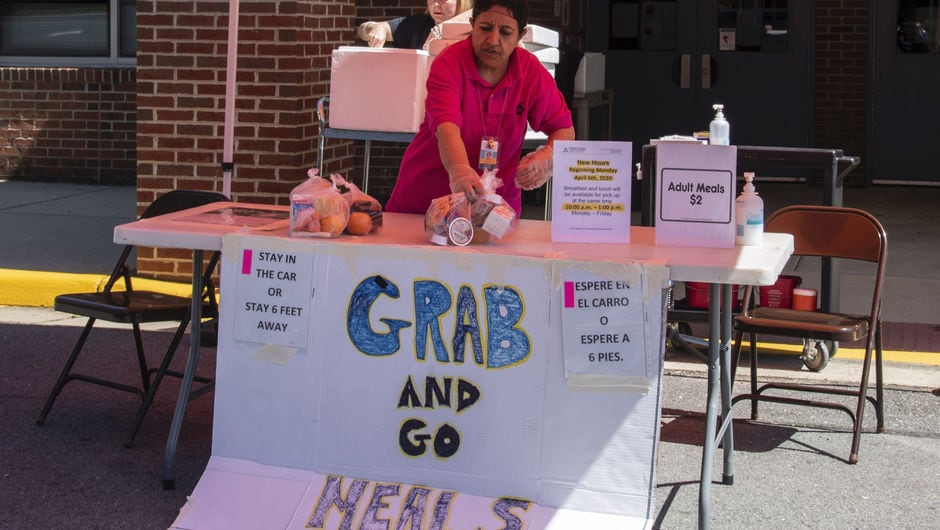 Grab-and-go meals from schools continue to be essential for families. In Virginia, Fairfax County and its school system developed a searchable map that includes the locations of all schools offering meals to go. Getty Images

The Healthy, Hunger-Free Kids Act of 2010, the first significant school meals program update in more than 30 years, brought newer, healthier nutritional standards to school cafeterias. The low-sodium, high-protein meals received mixed reviews. The New York Times reported in 2015 that “discouraging amounts” of mandatory fresh fruits and vegetables were ending up in the trash, rejected by students. But despite criticism and concern from industry groups, participation levels in school meals programs have stayed about the same.

Currently, under a 2004 law, students from SNAP households are automatically enrolled in the free school lunch program. Under the proposed, tighter SNAP eligibility standards, 942,000 students may lose access to school lunch, according to the government’s own estimate. (Most of those students may still qualify for free or reduced-price lunch, which is administered separately from SNAP, but their enrollment would not be automatic, instead contingent on filling out paperwork.)

An additional proposed change to the naturalization process—requiring aspiring citizens to prove they won’t rely on programs like SNAP—could scare households of uncertain immigration status out of the program, too.

But then, of course, came COVID-19, and it’s unclear whether those changes will stand when the pandemic ebbs. Meanwhile beginning in March, as the virus rapidly shuttered schools across the country, districts in cities continued to offer school meal services—mostly grab-and-go meals offered at school sites. Other communities, including in Appalachia and other rural places where families can’t walk to a nearby school, put school bus drivers to work delivering meals.

In other words, school lunch in most parts of the country has outlived the school day.