Writing Children’s Books With Students at the Center

Inspired by their time in the classroom and a love of literacy, alumni are writing children’s books that speak to their students’ lived experiences. 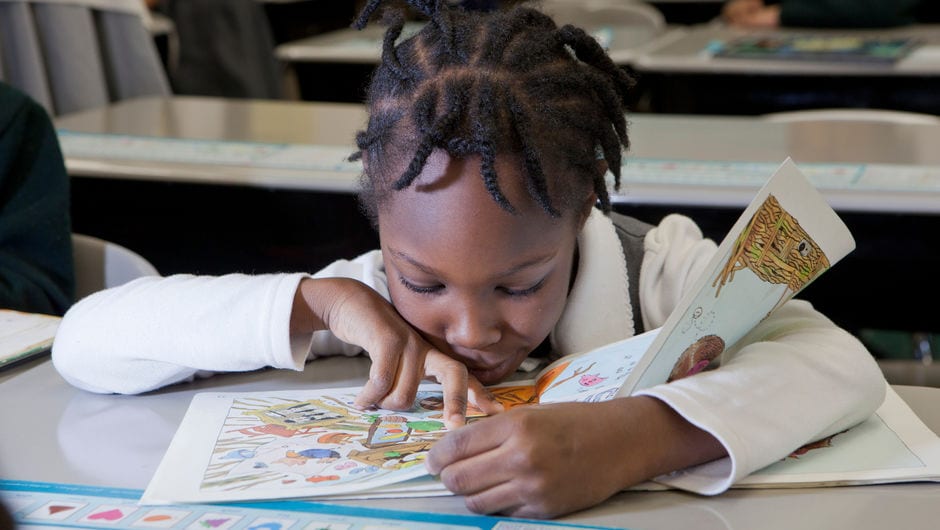 When little Keisha Cane gets an insatiable craving for a chocolate chip cookie in the middle of the night, she sneaks out of bed, accidentally breaks the cookie jar, and sets off a chain of silly events as she attempts to cover up her mess.

Hugh Manatee is kindhearted and shy but dreams of running for class president. There’s just one thing: He’s the only blue manatee in the class and is unsure if he’ll win the votes. That all changes when he learns that the president of the sea is also blue.

Keisha and Hugh are characters dreamed up, respectively, by Ashley Davis (Memphis ‘10) and Carla Siravo (New Jersey ‘14), two educators who have made a side-hustle authoring children’s books. Inspired by their students, they’ve taken their love of children’s literacy to the next level by creating and publishing stories of their own. (Other alumni authors include 1990 New York alumnus, Peter Hermann, star of the TV series Younger and author of last year’s If the S in Moose Comes Loose).

Characters with a Backstory

Carla’s book, Hugh Manatee for President, was released earlier this year. An elementary reading specialist for the Haddon Township School District, in Camden, NJ, she has kept a journal about her students since she began teaching in 2014. During lunchtime, she would jot down details about their personalities, their interests, and their challenges. “I just thought my students were so cool and so interesting and had such different stories and needs,” she says.

One student stood out in particular--a young Black boy in her second-grade class. “He had low self-esteem, but he was so bright and so caring and would do anything for his classmates,” Carla recalls.

Around that time, then-President Barack Obama visited Camden, NJ, and spoke in the neighborhood where Carla was teaching. Carla’s student was among those who heard him speak. “He was much like President Obama, and he felt inspired by that,” Carla says.

Her student returned from the event sporting a blazer and emboldened to run for class president. Although he didn't win the election, he became the central character for Carla’s book.

“He really did help all his classmates in all the ways that he said he would, just like in my story,” Carla says. “He was a mentor. He volunteered to translate for a new student from Puerto Rico. There are a lot of things he did that inspired the ideas for the book.” 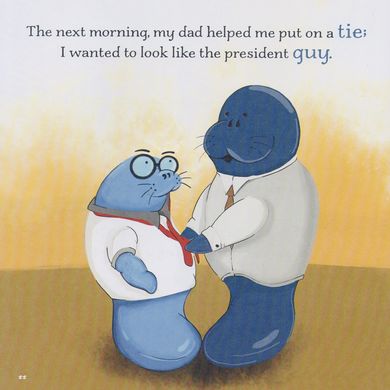 Hugh Manatee's father helps him get ready for the class election.

Ashley was teaching grades K-3 at Memphis College Prep at the time she wrote her book, Keisha Cane and Her Very Sweet Tooth. The book was a collaboration with her sister April Foxx, who designed the artwork out of intricate hand-cut paper figures. Keisha’s character was inspired by a little girl who attended Ashley’s church. “She had the most adorable little puffs,” she says.

The sisters wrote and published it through Kifani Press, a company they launched that produces creative works by diverse artists.

In the book, Keisha sneaks out of bed to grab a cookie and makes an enormous mess while trying to cover her tracks. When her mom wakes up, she retraces Keisha’s steps and eventually finds her hiding under the bed. 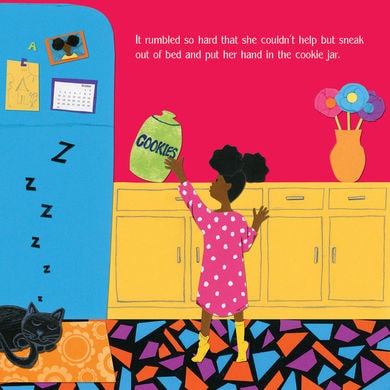 Keisha Cane tiptoes into the kitchen to sneak a cookie.

Ashley says her students were bright and inquisitive, and like Keisha, they occasionally experienced their own mishaps.

“As a teacher, I realized some of my students were getting into little situations--either out of curiosity or mischief--that they had to learn from,” she says. “The lesson readers learn from the book is that when you make mistakes, you don't try to cover it up.”

In order to elevate the visibility of Keisha Cane, Ashley and her sister ran a wildly successful Kickstarter campaign and raised enough money for a five-city book tour across New York, Pennsylvania, D.C., North Carolina, and Tennessee. They packed up Ashley’s little red car and traveled across the country, concentrating their tour on school visits so they could reach as many young readers as possible.

“I loved seeing the reactions of the kiddos when I read the story,” Ashley says. “One of the best moments was when a little girl with puffs, came up and she said, ‘Mommy, this looks just like me.’” 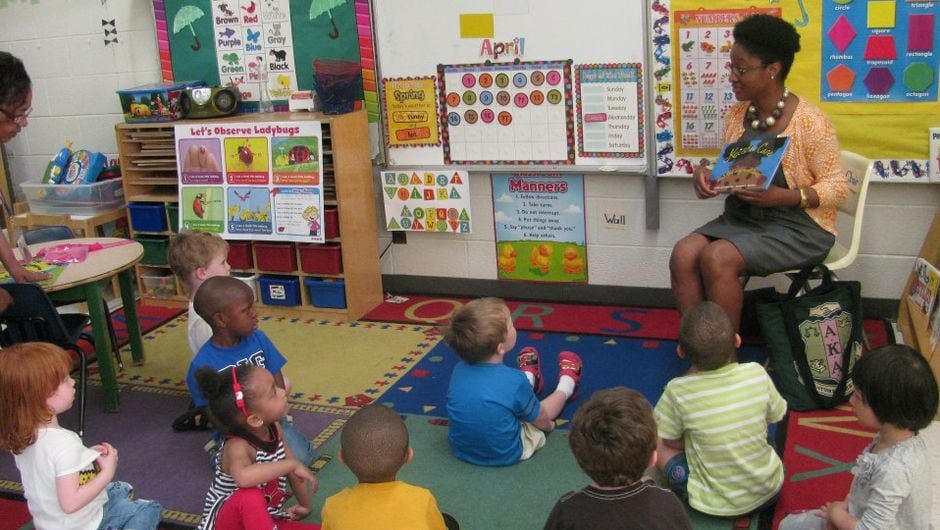 Ashley and her sister, April embarked on a five-city book tour, sharing Keisha Cane's story with children across the country.

Books that include diverse characters offer a window into a wide array of perspectives and realities. They also mirror and affirm a child’s own experience and identity. Yet, in 2016, people of color were the protagonists in only 22 percent of children's literature. Even fewer of these stories are authored and illustrated by a person of color.

This was the impetus for Ashley’s project.

Through Hugh Manatee’s parallel undersea world, Carla affirms her readers’ experiences. She has been reading her story to students across the district she serves, which includes schools that serve a diverse student population. In addition to seeing how her students can relate to the story, she is also moved by their capacity for empathy. 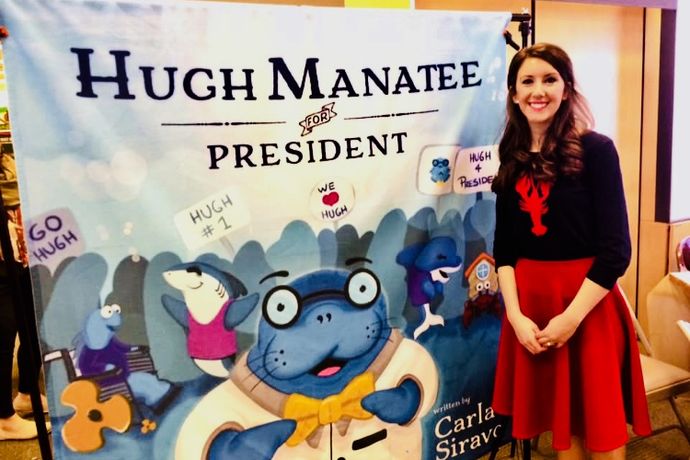 Carla Siravo at a book signing event at Barns & Noble.

Writing the Next Chapter

Both Carla and Ashley have plans to continue building on the characters and worlds they’ve developed in their stories. Carla has logged over 67 stories in her journal. There’s the hermit crab who lost his shell and became homeless. And a dolphin who speaks a different language.

“I'm starting to think about turning them into more formal manuscripts and submitting them,” she says.

Ashley and her sister plan to publish a sequel to Keisha Cane later this year, in which Keisha meets her match and discovers she has a brother. The sister duo are also looking at ways to help teachers teach books written about characters of color.

“It's hard sometimes to find the curricular resources or lesson plans or educational resources that allow you to teach from these books,” Ashley says. “We want to create a space where those resources are available for educators as well as parents.”

‘Resilient and Thriving’: What Immigrants Bring to Education