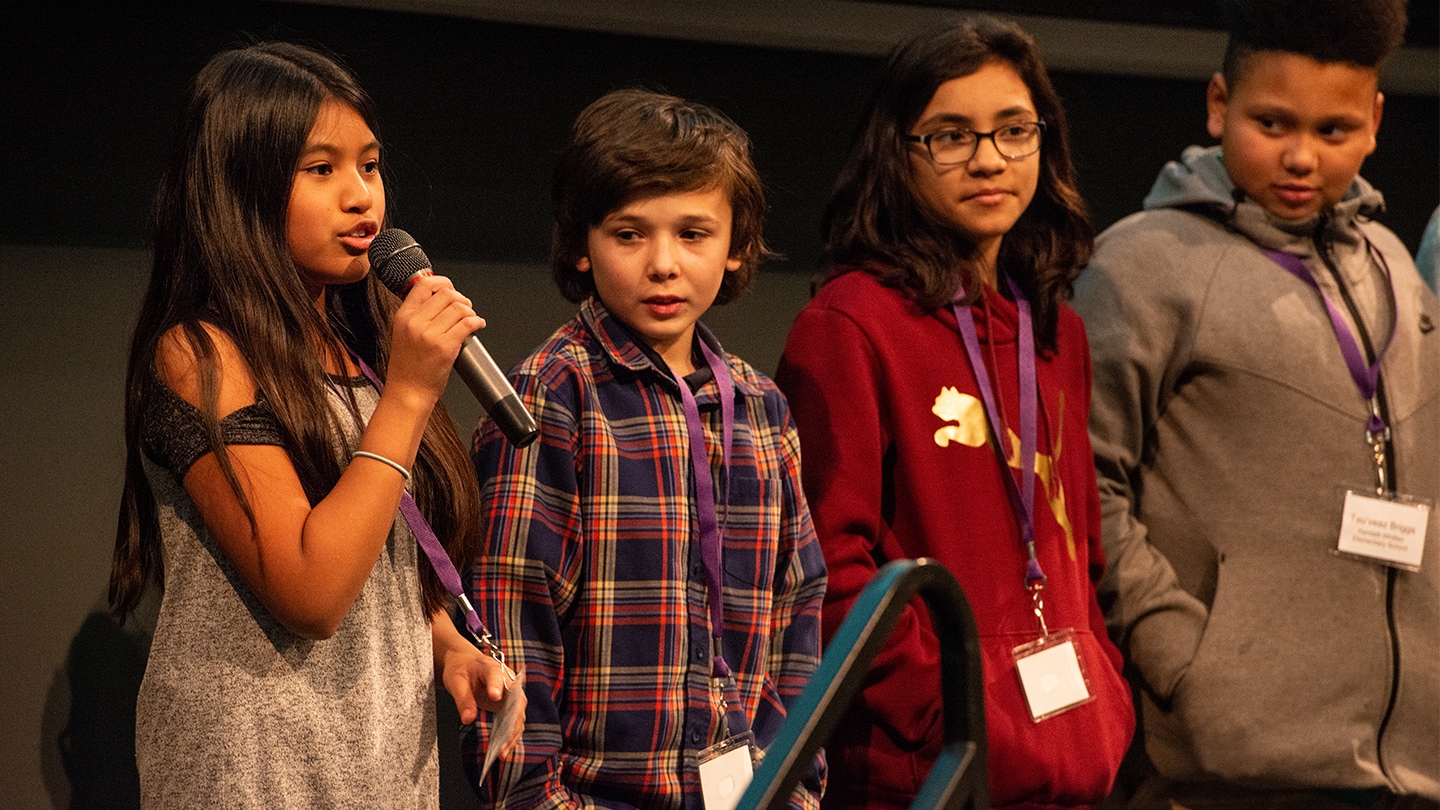 Elementary-aged kids advocating for prison reform, helping the homeless, focused on ending child abuse – the kids in this leadership program won’t let their ages stop them from being the change they want to see in their community.

On a recent Thursday evening in Tulsa, Oklahoma, Kristopher Arroyo stood in front of 200 people at Tulsa Community College and called for improvements to Oklahoma’s prisons. It was his first public-speaking experience, but he hid his nerves well—especially for a fifth grader.

Over the past year, Kristopher was one of 35 elementary, middle, and high school students in Tulsa Public Schools and Union Public Schools who participated in Changemakers, an after-school program that helps students develop leadership skills through community research and action. The semester-long project culminated in a pitch night, open to the public, where Changemakers shared their work and networked with the crowd.

Kristopher’s group, from Ellen Ochoa Elementary, shared a video they produced focused on the need for better mental health services for inmates. During the networking time following the presentation, Kristopher pulled business cards from the back pocket of his blue jeans and shared them with people curious about his group’s work, which included surveys on community awareness of incarceration and the effects of incarceration on families.

“People don’t expect kids to do stuff like this. They think we just sit on the couch and play video games all day,” Kristopher says. “They don’t know we want to make an impact.”

Andrew Spector and Jake Lerner (both Greater Tulsa ’15) began developing the Changemakers program as first-year teachers in Tulsa Public Schools classrooms. Their students, they realized, were Tulsa’s greatest untapped potential for positive impact. Spector had a group of students who, with no guidance, recognized the need to increase self-esteem among their peers. In one afternoon, they wrote a vision statement and a three-page pitch to create a club that distributed positive daily affirmations.

“These kids were not the exception,” Spector says. He and Lerner asked themselves, “What would happen if we put these students in the same space and supported them as leaders? What would be possible?”

In 2016, the teachers organized a one-day student leadership summit. They saw the kids come alive when given a platform, but the one-day event didn’t allow for development and follow-through. Nearly three years after that initial gathering, Changemakers has seven coaches placed in seven schools. Lerner and Spector worked through multiple program changes, modifying on the fly. And they’ve been open about their bumpy process with Changemakers as a way of revealing the true nature of community work.

“We could have sat around and planned for months and months that first year,” Lerner says. “But one of the best ways to learn is just to do it and let things work or not work.”

Alumni from the early days are now helping the duo to lead. Five are on the Changemakers advisory committee. Others help with events like pitch night, acting as emcees or handling event photography. More than 60 Tulsa schoolchildren have gone through the program, and three more schools will offer it this spring. Changemakers is free and open to all students. The only requirement is a desire to impact schools and the community.

“When communities are positioning students as passive recipients of their experiences, and not active agents in driving what their environment can look like, they’re missing out on the tremendous capacity that kids have,” Lerner says. The co-founders’ hope is for kids who go through this program to become lifelong leaders positioned to create the change they want to see. 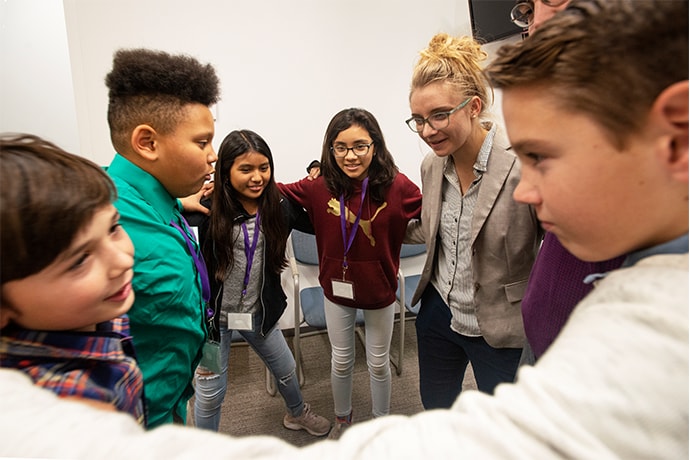 © Photo Melissa Lukenbaugh Showtime: The Kendall Whittier Elementary School Changemakers, along with coach Andrea Brush (Greater Tulsa '16) pump each other up just before taking the stage to present their semester project to help the homeless. The kids spent hours rehearsing their parts, and student Cairo Pray (front right) even timed pauses to take in applause and laughter. He got them both during the presentation.

Across all the Changemaker groups, kids use a “listen, listen, act” process to decide the issue they will tackle. At the Tulsa School of Arts and Sciences, eighth grader Ben Donald first “listened” to himself, drawing on his own life experiences. “I know I’ve been racially profiled. I go into grocery stores and cops follow me around,” Ben said during a Changemaker get-together on campus. “I don’t get the point. I don’t know why it keeps happening.”

Others shared similar experiences. Through school-wide surveys—the second “listen”— they learned that most students also were dealing with racism, bullying, and discrimination.

Ben’s group developed a simulation designed to build students’ empathy. At the start of different eighth grade classes, students drew a card that gave them a disadvantage or an advantage to experience until the end of the period. If a student was in a math class and the card said they lacked necessary school supplies, that student would give up his or her calculator and find a way to make it through the lesson.

After the simulation, Ben’s Changemaker group surveyed peers again and found that 63 percent felt more empathy toward those experiencing discrimination. Ben says that’s a win. But he doesn’t want it to stop there. He wants to build on the project. He wonders what would happen if the simulation were school-wide—then maybe, if he could get enough adults on board, citywide.

Kristopher is thinking about his future as a community change-maker, too. After completing the project on incarceration, he wants to focus his energies on helping to end child abuse. He has leadership experience to build on and the newfound belief that he really can make a difference. “I didn’t know being a Changemaker would be so exhausting,” Kristopher said following his speech. “But it feels amazing.”

The Census Counts as an Educational Equity Issue