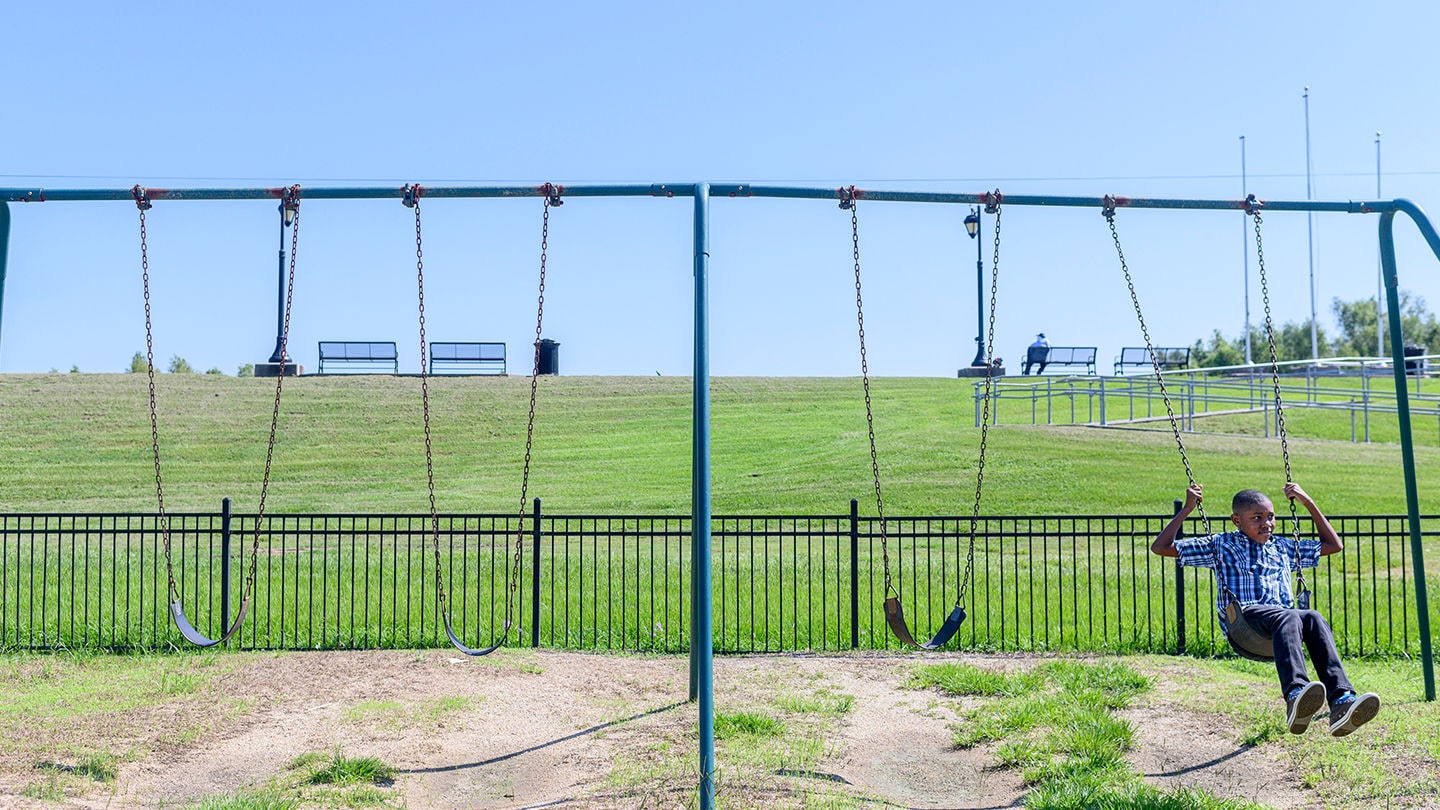 Welcome to My Neighborhood: Donaldsonville, Louisiana

Every community has its special places. Let 11-year-old Brennan Daggs be your guide to Donaldsonville, Louisiana

“What I like about Donaldsonville is that everywhere you go, everyone knows you and your entire family.” 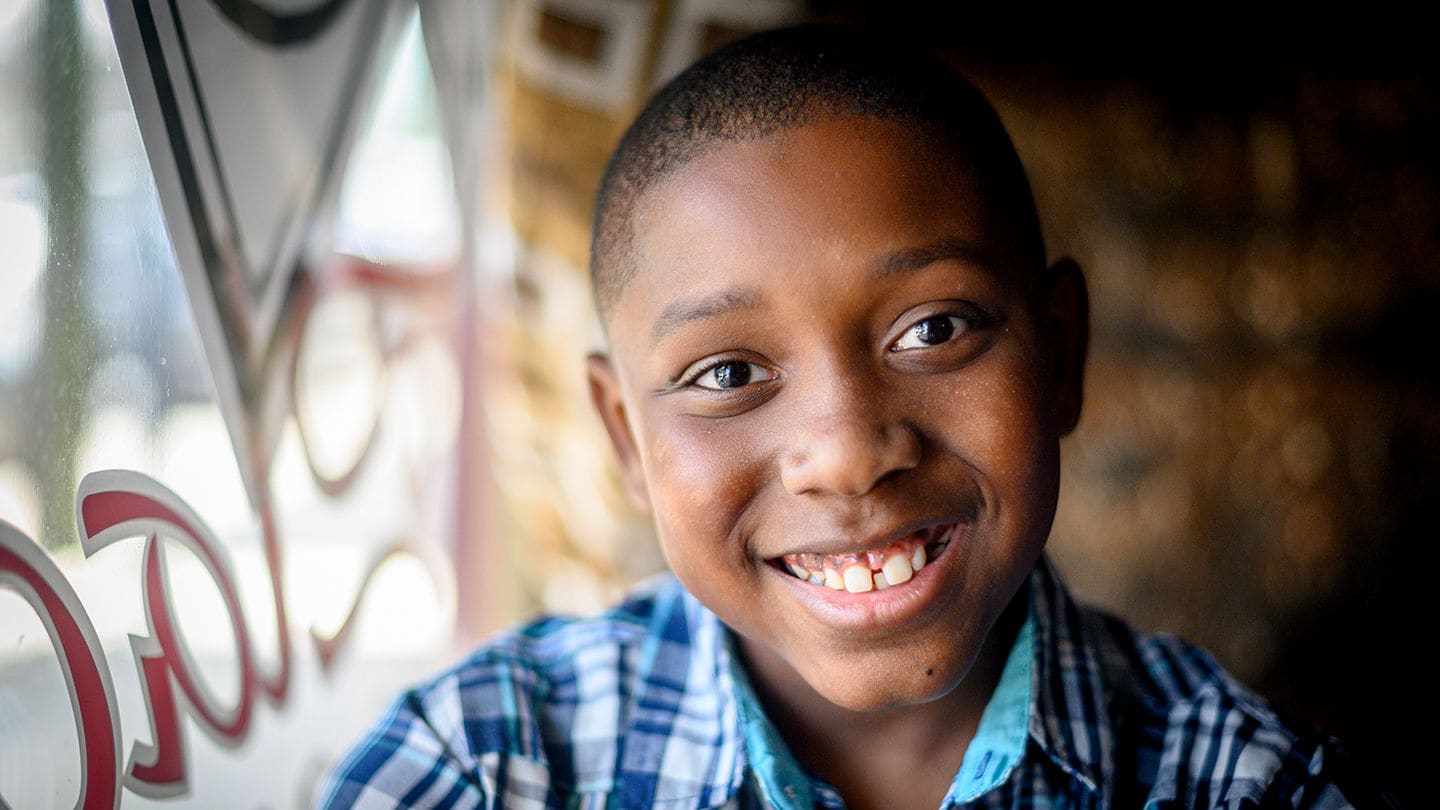 Everyone loves to have an insider guide. We asked three students in towns where Teach For America places corps members (Dayton, Ohio; St. Louis; and Donaldsonville, Louisiana) to show us the places that are special to them in their communities.

Education can feel like a force that pushes a person to look elsewhere to find opportunity or adventure. These three students showed us the beauty, the places, and the people worth seeking out right in their home communities.

Brennan Daggs’s family has deep roots in Donaldsonville, Louisiana, a town of about 8,000 people 35 miles south of Baton Rouge on the west bank of the Mississippi River. The family matriarch, Irma Reynard, whom Brennan calls “Mawmaw,” lives near the River Road. Brennan has a tour of Donaldsonville all planned for a visiting photographer and me. But first, we start the morning in a place Brennan loves: Mawmaw’s kitchen. 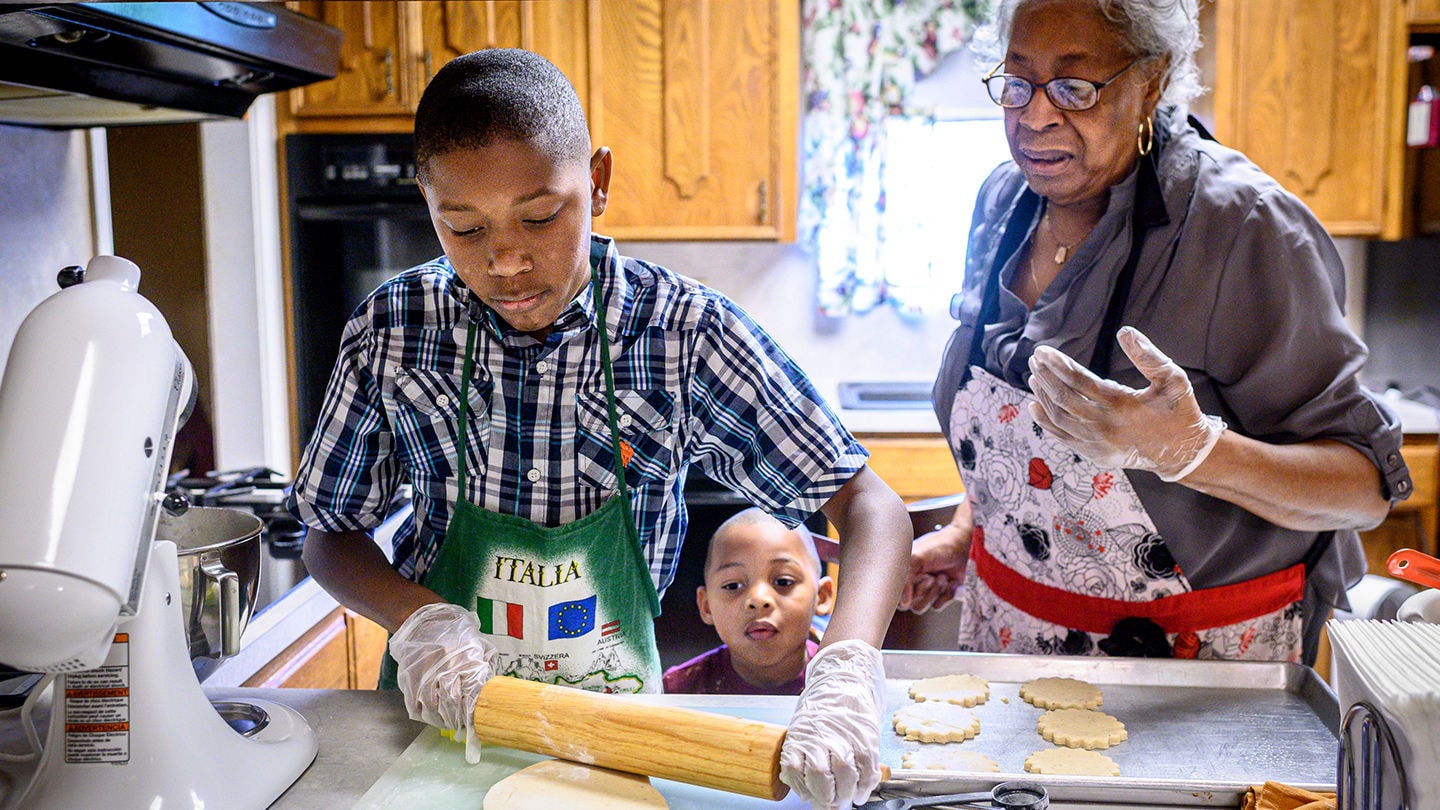 Brennan can cook; he imagines himself competing one day on the show Chopped Junior. Today he is baking nutmeg-scented teacakes with Mawmaw. She was one of 7 siblings from Ascension Parish, and she married a man with 10 siblings. Almost all their descendants, including many cousins of Brennan’s, live near or around South Louisiana. Brennan’s mother, Andrea Wade, teaches English at the Donaldsonville middle school Brennan attends. She’s been a teacher or school administrator here for 23 years, as well as an active minister who assists on Sundays at one of the several Baptist churches with which her family is associated.

Mawmaw retired a few years ago as a social worker for the parish, and now she bakes for people’s weddings and other events. Today, as Mawmaw serves us warm-from-the-oven teacakes, her grandson listens carefully as she traces the history of their family and of every Black-owned business that once could be found in the downtown Donaldsonville Historical District. We’re heading in that direction. 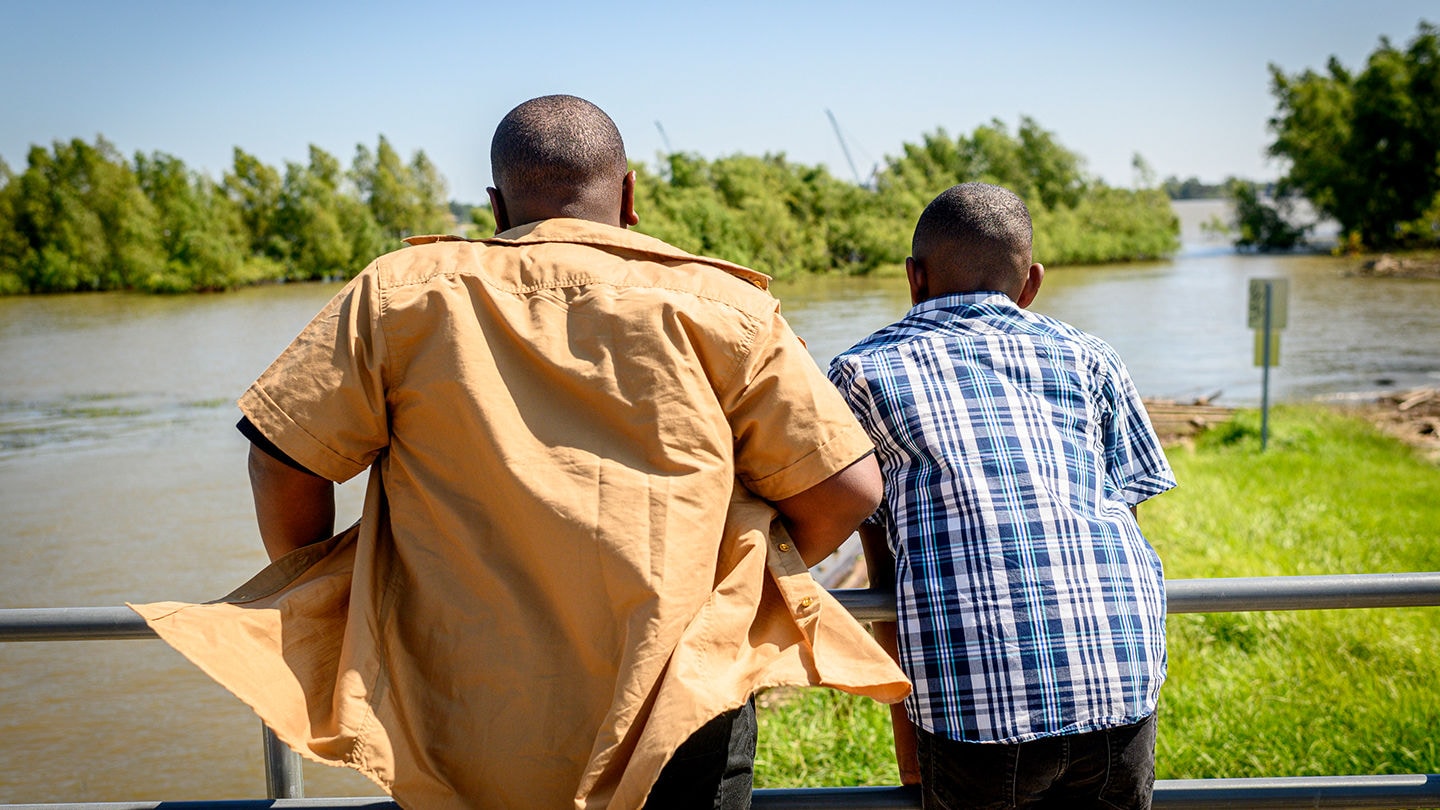 © Photo Emily Kask As summer was drawing down, Brennan and his twin buddies stopped by the River Walk to check out how high the Mississippi was that day.

We’re quite a group as we head out today to see Brennan’s special places. He’s invited along his mother; Mawmaw; his older sisters, 20-year-old Kelsey and 16-year-old Rayanna (a junior at the parish early-college high school); his stepfather Lloyd; and his 4-year-old brother Kevin. We pass the courthouse park, where the whole town turns out for Juneteenth and an annual fall homecoming parade that includes four floats big enough to carry every teacher in Donaldsonville’s four public schools.

We stop to take in the view at Donaldsonville’s River Walk, where Brennan leads us up a hill to a ridge with a path lined by benches from which you can watch the barges on the Mississippi River. “This is the first park I remember from when I was little,” Brennan says. He turns around to see his sisters drive up with two of his friends, 11-year-old twins Ray’Shawn and Tre’Shawn Dunham (Brennan calls them Ray and Tre), who’ve come along out of curiosity. The boys are excited to see each other on this July day, having mostly connected virtually lately over the game Fortnite. 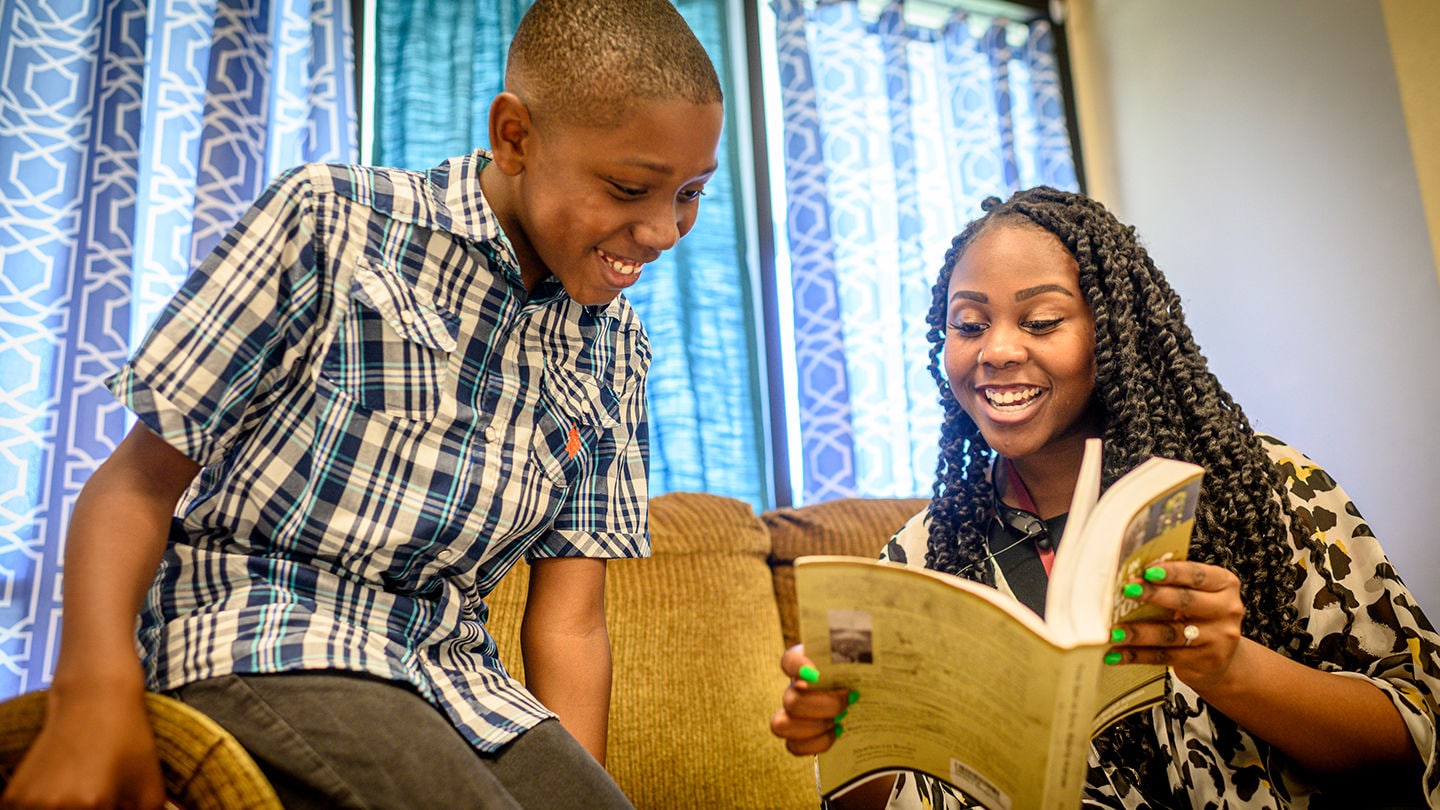 © Photo Emily Kask Brennan’s fifth grade teacher, Chelsie Griffin, told students how their school was named for the first Black medical doctor in Donaldsonville who financed the building of a public school for Black students in 1937. 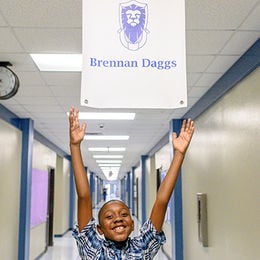 In fifth grade, Brennan and friends started a “peace council” at their school.

“I think it’s amazing that a Black man made the school I go to,” Brennan says. Both his elementary and middle schools are named for John H. Lowery, who became Ascension Parish’s first Black medical doctor in 1894. In 1937, Lowery financed the building of a school specifically for Donaldsonville’s Black students to raise the quality of their public education.

Brennan’s fifth grade English teacher last year was Chelsie Griffin (S. Louisiana ’15), who is studying for a doctoral degree in curriculum and instruction with a research focus on rural schools. She keeps Dr. Lowery’s photo on a bulletin board in her classroom. Old-timers recall hearing about how Dr. Lowery paid Black teachers’ salaries himself when the district hired only white teachers.

As he was finishing fifth grade, Brennan was named his school’s Student of the Year. He thinks it was because of the Peace Council he started with friends. “I remember there was this one day where they had a fight between these two people and our teacher got hit and she started crying. I was like, this doesn’t make any sense. We don’t want people to get hurt at this school. I went to my teacher and told her we should make a peace project.” In fact the school did organize students, mostly in fifth grade, into weekly groups where they discussed “peace strategies” and competed as classes to be the most peaceful.

I ask Brennan why he started the council. “I think it’s because my mama is a teacher,” he says. “I feel like I’m the mini-teacher. It’s up to me to stop fights and stuff.”

“He genuinely is a child who wants more for his classmates, a very selfless kid, and to say that about an 11-year-old is unusual,” Chelsie Griffin says. 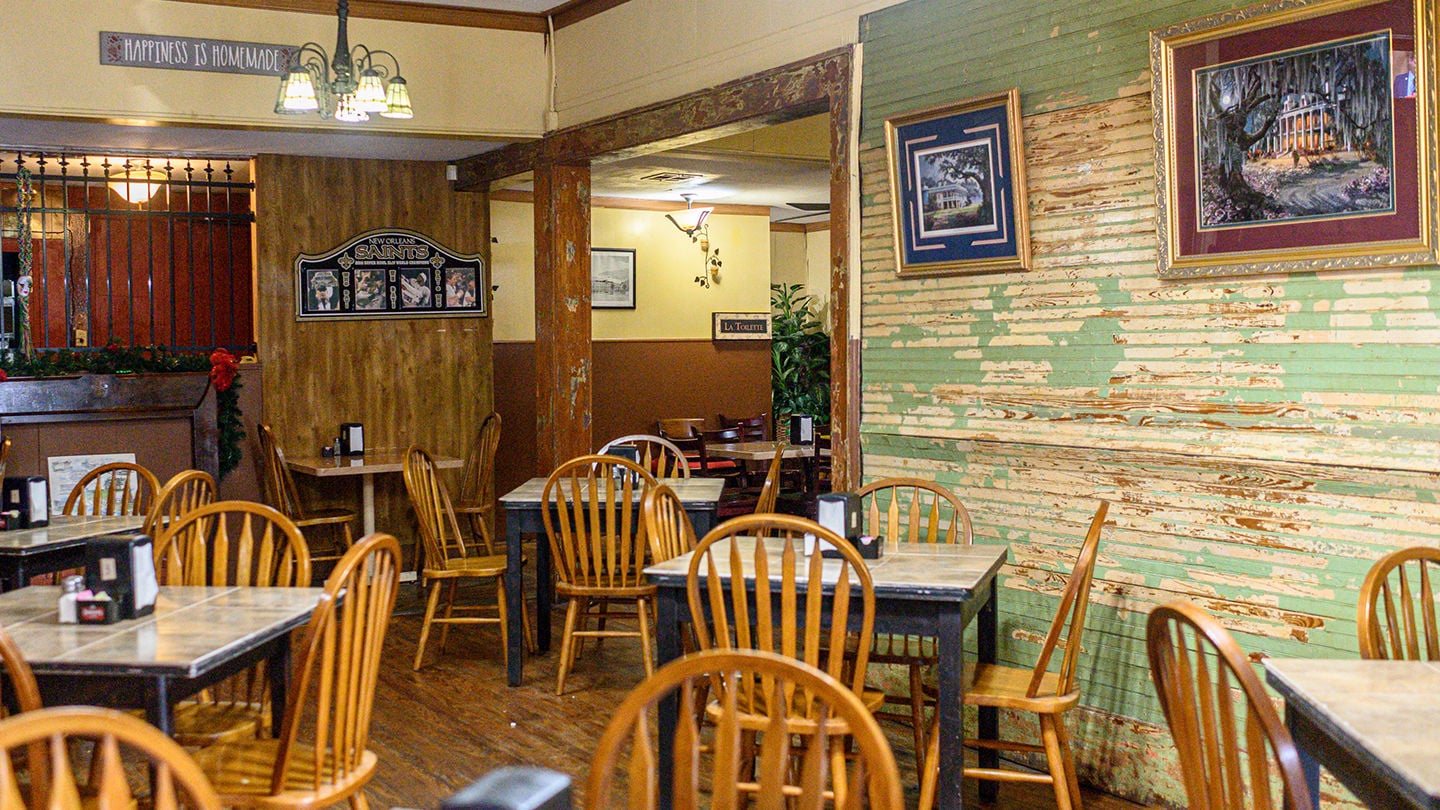 © Photo Emily Kask Brennan was invited back to visit the kitchen at Minnie’s Place, his family’s favorite restaurant in Donaldsonville.

If Brennan hadn’t picked this restaurant for lunch, Mawmaw would have. She knew the original Minnie who founded this downtown restaurant, and the whole family knows Joyce Carter (Minnie’s daughter and an active parent at Brennan’s school) who is now the owner. Hosting us today was Joyce’s daughter, Lydia Harrison, who is also a paraprofessional at the middle school. “It’s small,” Brennan says of the restaurant, “but I think the food that comes out of here tastes really amazing.” He gets the fried fish with mashed potatoes and gravy, plus a tour of the kitchen. 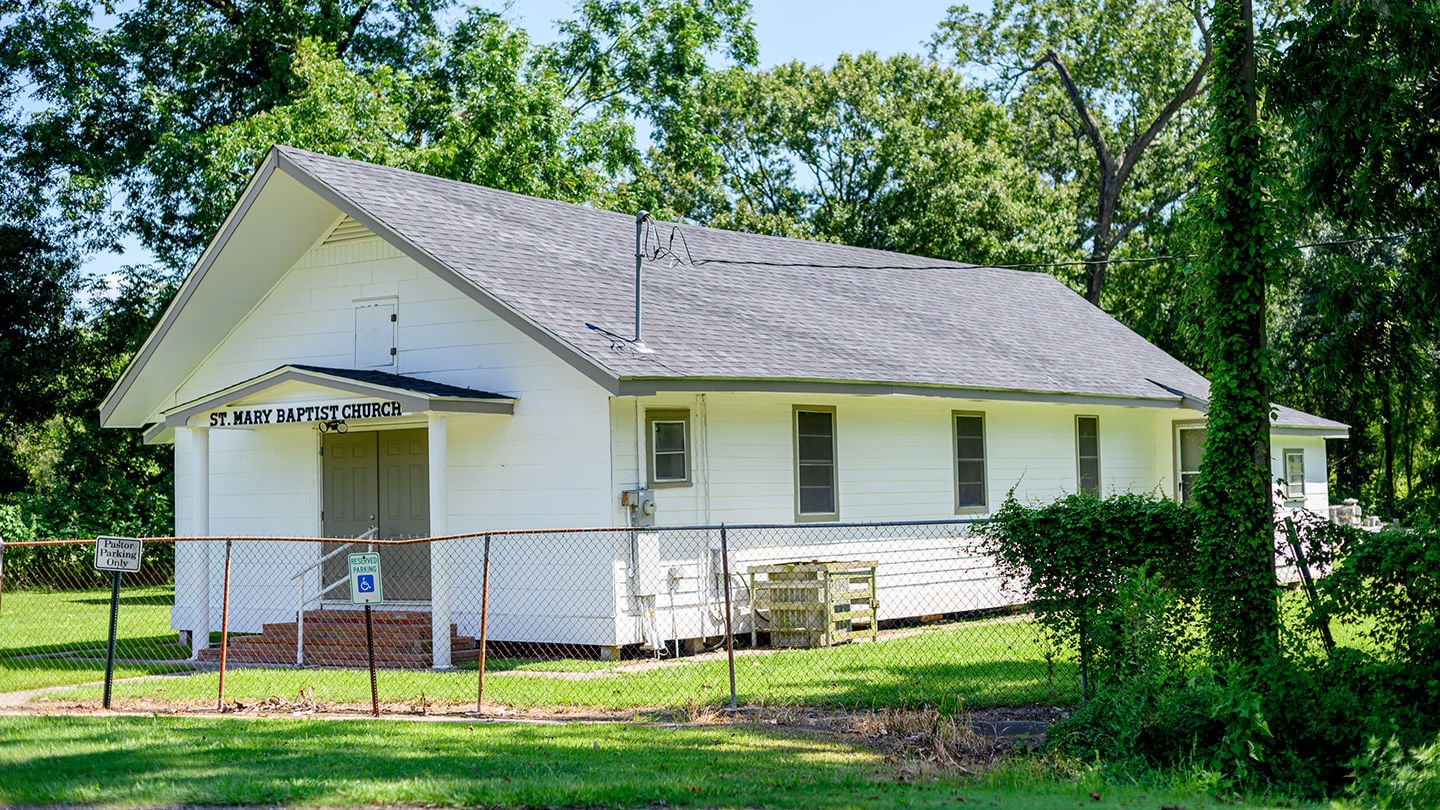 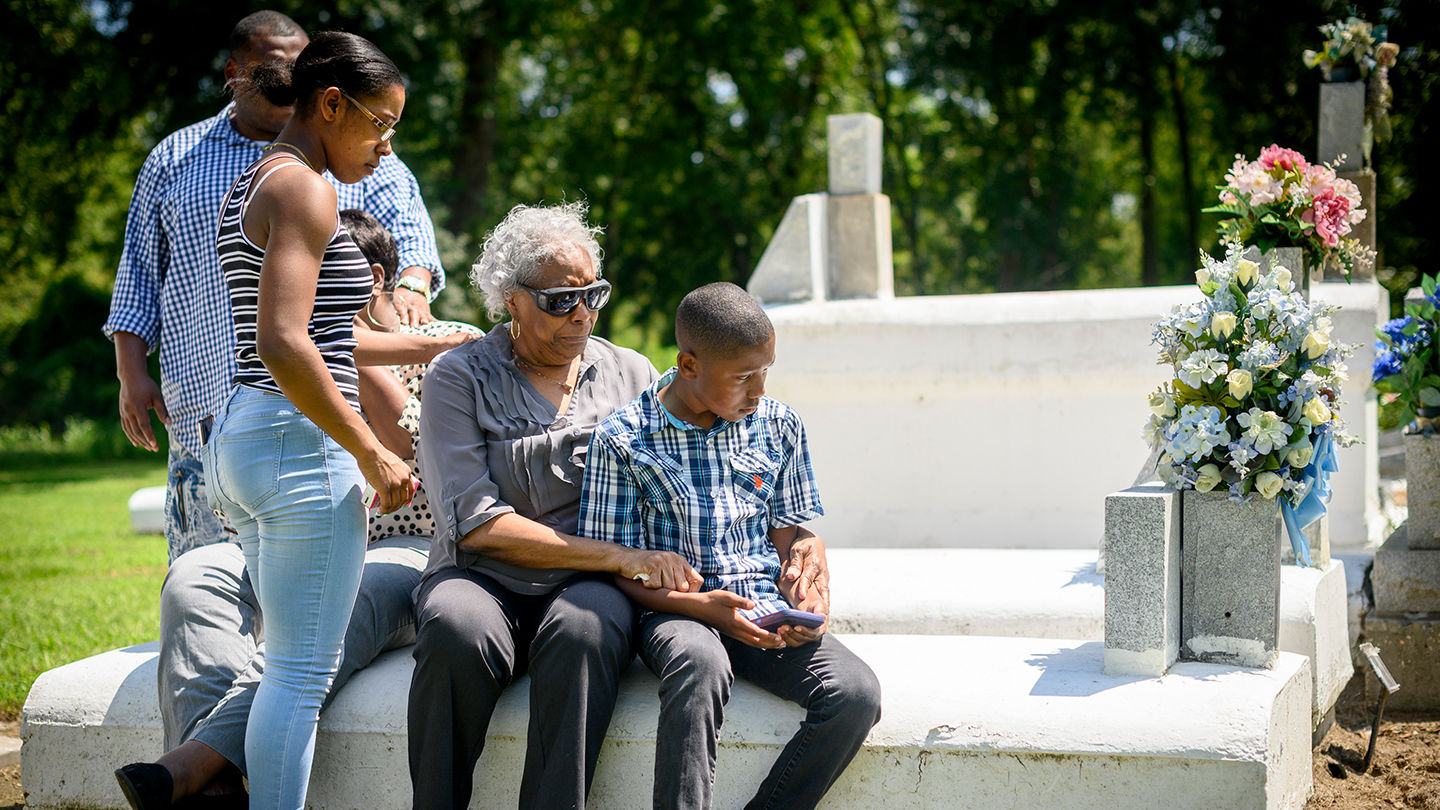 © Photo Emily Kask Brennan was extremely close to his grandfather, who is buried in the graveyard of a 130-year-old church which his family has been part of for generations.

We drive a half-hour past sugar cane fields into the countryside to get to a place that is special to Brennan. When Brennan was in preschool, his mother was an extremely busy assistant principal, so Brennan’s grandfather Herman Reynard was his constant companion. He took Brennan to and from preschool and to his favorite places, including breakfast at McDonald’s. He is buried in the small graveyard of the 130-year-old church where generations of this family have been pastors, deacons, and deaconesses.

Brennan still thinks of his grandfather all the time. “My Pawpaw was a great man, husband, father, grandpa,” Brennan says. “We go here on Father’s Day and his birthday and the day he died, and we pray and say, ‘Happy birthday.’” 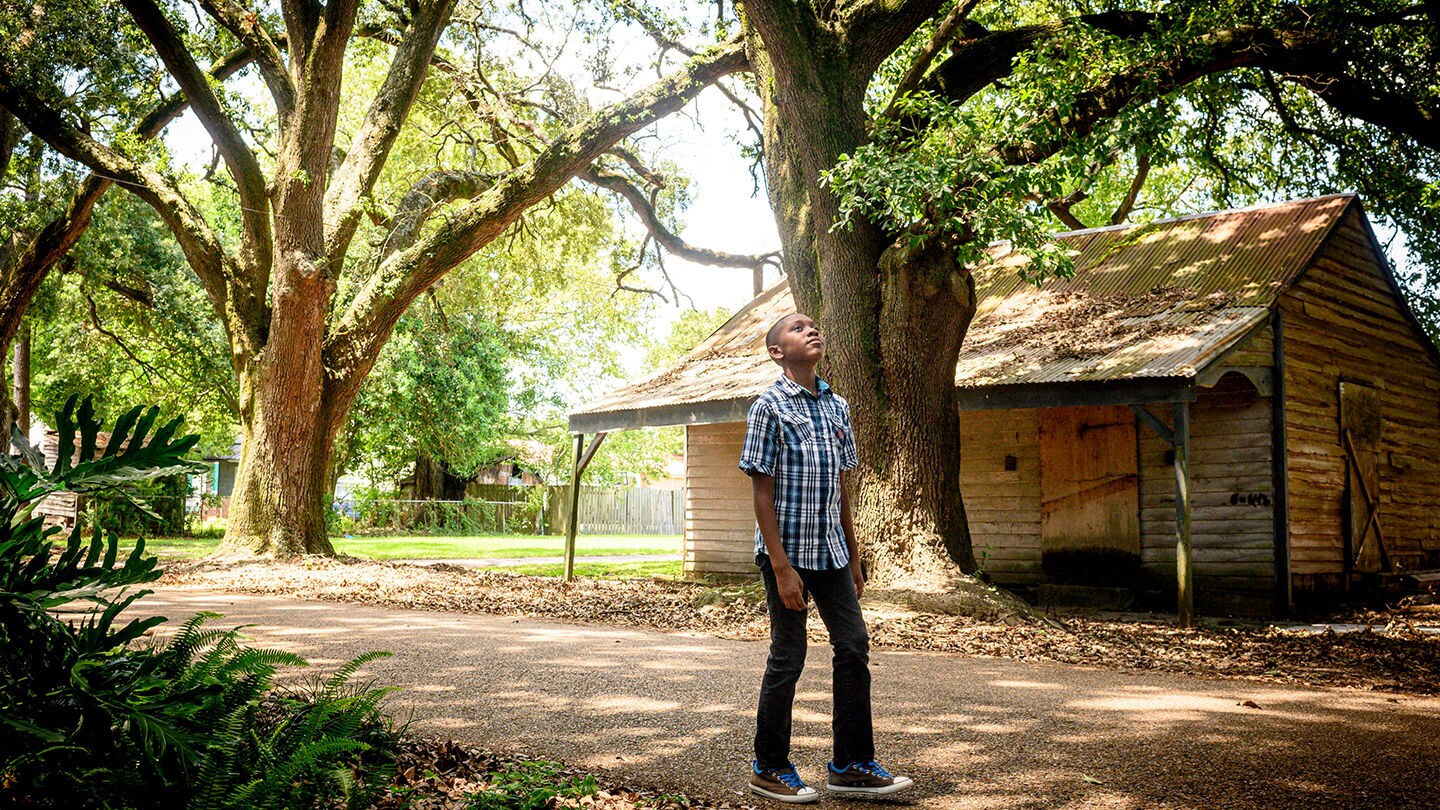 © Photo Emily Kask Many of the buildings around Donaldsonville’s Railroad Avenue, and on side streets like this one where Brennan is walking, date back to the Reconstruction era.

The center of town, with buildings dating from around the Reconstruction era to the 1930s, is a resonant place to walk, with every side street hosting a building that means something to Brennan’s family. Over there is Kevin’s day care, around the corner is another family church. Brennan says, “What I like about Donaldsonville is that everywhere you go, everyone knows you and your entire family.” Baton Rouge, though, has a huge trampoline park. He could imagine living there too.

Welcome to My Neighborhood: Dayton, Ohio