Uprooted by Gentrification, Learning to Architect the Future

In booming Nashville, Tennessee, explosive growth is displacing students and teachers from parts of the city. But through an inventive urban design course, middle school students are preparing to become the agents of Nashville's development.

Uprooted by Gentrification, Learning to Architect the Future

Consider a major city that’s evolving its way through explosive growth, creeping gentrification, and skyrocketing housing costs. What if that city gave its students the tools to influence some of its most urgent urban-planning decisions?

The city of Nashville, Tennessee, is not there yet. But this year, 4,000 seventh and eighth graders in 20 Metro Nashville public middle schools are learning the fundamentals of how cities are planned. Students are designing projects that tackle affordable housing, public transportation, and other issues that affect the changing neighborhoods they walk or bike through every day. A goal is to prepare students to make their voices heard in the places where decisions about Nashville’s built environment are made.

With teacher Melody Gibson (Colorado ’09) as lead curriculum developer, the Nashville Civic Design Center has a goal of eventually delivering its 15-hour, project-based Design Your Neighborhood curriculum to every middle school student in Metro Nashville Public Schools. (Gibson designed the curriculum to be taught through virtually any subject, from art to math to history.)

“I wanted to have a voice,” says Mena Gamil, now a high school senior who was one of the first to try out the curriculum when he interned with Gibson and the design center as a freshman. Urban development isn’t just theory to Gamil. He is living the story of gentrification. Pressured by rising rents in their neighborhood near the city center, his family chose to buy a house farther out. Now Gamil has to leave home at 5:45 each morning just to finish out his senior year of school.

He believes that as more students come to understand both the history and potential of Nashville’s development, they will become the agents of its change. He says, “It’s going to be a great place to live.”

One Day Magazine is using video to tell stories of students and alumni working to change the legacy of racism and oppression in their local communities.

Watch the first video in this series: 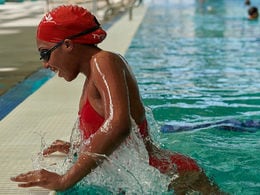 Drowning is the fourth leading cause of unintentional death for children in Clark County, Nevada. Meet Las Vegas students Elijah Garcia and Beamber Davis who are learning to teach swimming and save lives.

Black Teachers, Black Excellence and The Legacy of Hope in the Classroom