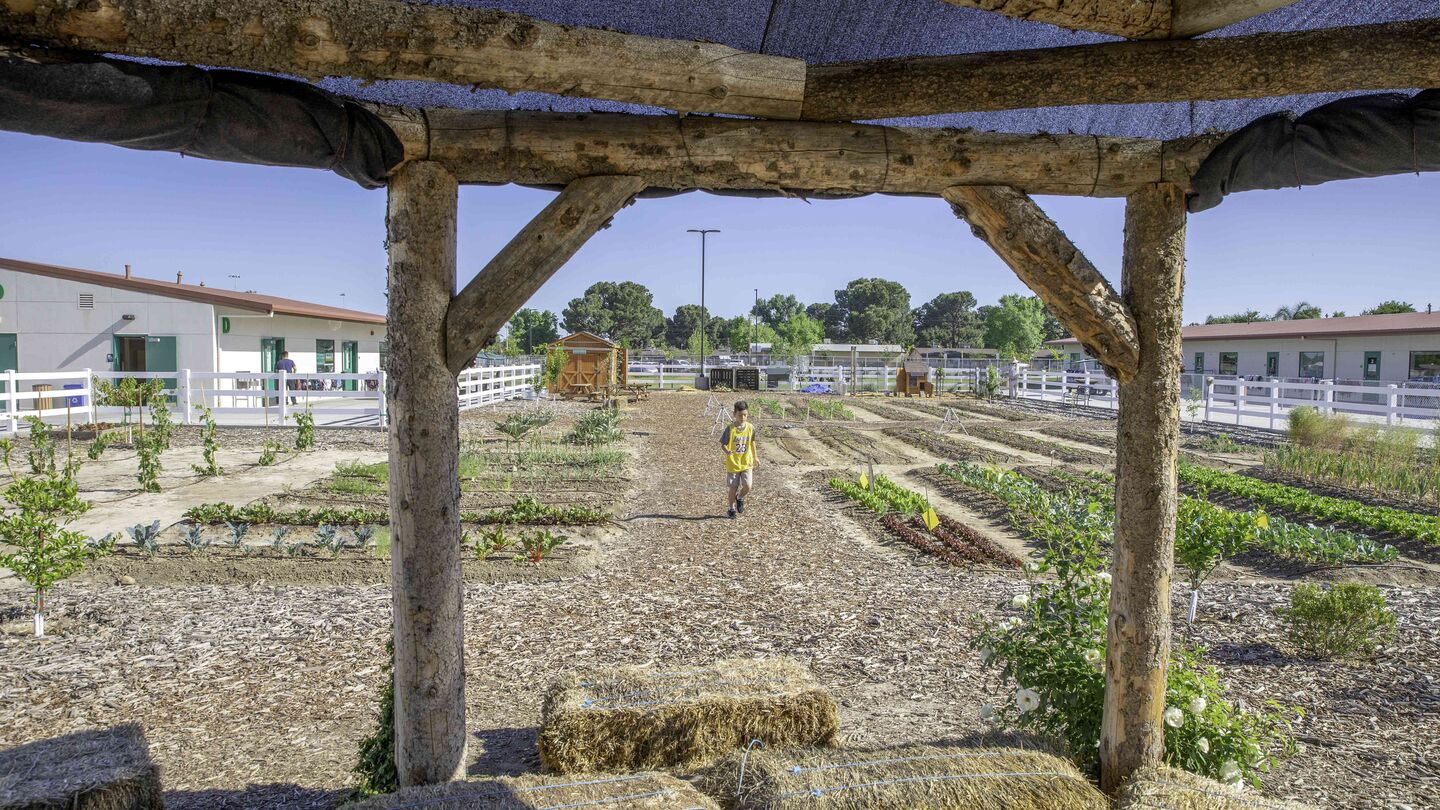 When design decisions are based on students, community, and history schools begin to look and feel very different.

Some schools, like Grimmway Academy (above) in Shafter, CA, use hay bales as affordable out door classroom furniture.

How can a school building speak to the experiences of newcomer students, many of whom have had their education interrupted and others who experienced the trauma of refugee camps and detentions? Before beginning the work to design a new school with architects Edgar Moreno and  Sarah Woodhead of the DLR Group,  principal Carlos Beato and vice principal Daniel Sass (Baltimore ’09) asked that question of more than 100 community members at the International High School at Langley Park in Maryland. Asked by architects to pick five values from a word sort, students had a consistent top choice: freedom.

In the school’s current makeshift school building, the culture that Beato, Sass, and teachers have built is working. The graduation rate is 95% (compared to the national rate of 67%). Last year, close to one in five students (17%) exited their English for Speakers of Other Languages (ESOL) program, a higher rate than any other school in the district.

“The new building will communicate that students are loved and cared for and that they can safely learn in this space and contribute to the space.”

But from the beginning, when IHSLP had to split students between temporary classrooms and a shared building, conditions have obstructed the school’s core values of empowerment, collaboration, and critical thinking. Sass says the squeeze “communicated to our students that
they were overlooked and undervalued.”

In 2017, Sass and Beato (who studied architecture before finding his calling as an educator of English language learners) got an opportunity to plan for a building that would integrate trauma-informed design. Their plans for a new school call for biophilic elements, like cross-laminated timber, to replace cold laminated floors and sterile brick or concrete walls. (Warm wood and other natural-looking building elements are proven to reduce blood pressure and stress.) They designed porous indoor-outdoor spaces and positioned the school next to a park.

Architects designed classrooms with glass walls that look into communal spaces for students whose past experiences conditioned them to be alert for danger. Students will be able to work collaboratively at tables and standing desks in spaces built to foster social interaction.
Each floor will have suites for counselors.

“The new building will communicate that students are loved and cared for and that they can safely learn in this space and contribute to the space,” Beato says.

Of utmost importance to community members and students was getting a soccer field. Soccer is the beating heart of the school and its greatest source of pride. But students have no place on their current campus to practice or play home games.

Fitting a soccer field into the school’s lot was tough. To do it, architects created a three-level school that tucks into an existing hillside. The high school will be across the street from an elementary school and the first floor is designed to serve as a community center. The campus will feel secure but opened to the neighborhood.

And Principal Beato will get his wish to locate his office at the center of the middle floor. “I asked for [Sass] and I and to be immersed in the learning experience and not in the administrative office … It communicates that there’s no us versus them.”

The safest place during a pandemic is outside, where space and fresh air reduce the risk of contracting the virus. That’s mixed news for students, teachers, administrators, and parents. It became immediately clear as schools tried to open at the start of this school year that most American schools were not built for fresh air to move through buildings, nor were they designed for students to learn outside. That’s what Green Schoolyards America and advocates like Jenny Mulholland-Beahrs (Greater Delta ’02), who founded Inclusion Outdoors, are trying to change.

In June, more than 1,000 educators, school leaders, and district staffers showed up to a webinar on how to turn school buildings inside out to make outdoors, in-person learning the “New Plan A” through COVID-19.

The message from presenters was simple. Virtually every school can bring some learning outside, regardless of location or the amount of space available.

Presenters offered diagrams of various seating arrangements that would meet the Center for Disease Control’s distancing guidance. They blueprinted three different set-ups a school could construct (depending on the amount of outside space they could access) and offered step-by-step guidance on acquiring the needed waivers and approvals.

The Founder and CEO of Green Schoolyards America, Sharon Danks, is a purist who believes that weather is not a deterrent. During a tuberculosis epidemic 113 years ago, school moved outside as a life-saving measure, she notes. Rhode Island students kept warm in the winter with sleeping bags. In Northern Europe, Danks says, schools simply provide weatherproof gear.

It’s time for schools to consider operating outdoors, she says, for ecological as well as pedagogical reasons. Schools manage a lot of public land. Imagine if schools started acting like land managers and not just facilities managers?

Asphalt yards and “safety rubber,” which can get as hot as 170 degrees on sunny days, would give way to compact sand, trees for shade, grass, and garden spaces. Wooden beams and rope would replace metal jungle gyms. Sliding glass doors would let light in and children out.

Danks can imagine this because she’s seen it. In El Cerrito, California, a small city just north of Berkeley, she partnered with a nonprofit, private school to convert an old church into a green school. The Golestan School was the first school in the area to receive a waiver from the state to stay open when other schools closed last spring.

But the conversation that seemed so lively last June—the one about moving schools outside—has mostly quieted as more urgent concerns swallowed educators’ attention.

Still, other institutions, including restaurants and businesses, keep pushing outside into streets, onto rooftops, and in parks. When schools are ready to reconsider, green school proponents have the plans.

The founders of the Bryan Allen Stevenson School of Excellence (applying to open in 2022 in rural Sussex County, Delaware) hope to move into a building that directly connects to the deep history of the local Black community where Stevenson was raised. The school’s namesake grew up to challenge racially biased death row sentencings, to write the book Just Mercy, and more recently to lead the Equal Justice Initiative, which opened a museum and memorial in Alabama that documents this country’s history of torture and lynching of Black people.

“Delaware was one of the last states to desegregate schools,” Ashford notes. “I don’t say integrate because we’re still not integrated.” Now, “everything we do has to be grounded in the context and history of this place.”

Ashford and co-founder Alonna Berry (Jacksonville ’11) had hoped to base the school in one of the 80 original “DuPont Colored Schools” that opened their doors in the 1920s to serve Black children who were excluded from whites-only public schools. In Sussex County, the school was named for Richard Allen, the activist who purchased his freedom from slavery and then founded the African Methodist Episcopal Church. A planned partnership with the Richard Allen Coalition fell through. But Berry and Ashford haven’t abandoned their intention.

Ashford says, “This school is going to interweave service learning with rigorous education,” with students providing value to the community while bringing what they learn back to the classroom. “We want to find an old space and turn it back into the center of the community, and provide whatever other service the community might need.” 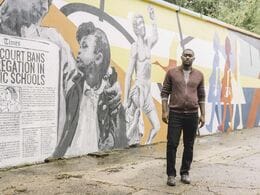 “For literally every injustice, there is an architecture planned and built to sustain and perpetuate that injustice.” Bryan C. Lee Jr. is a New Orleans architect and designer who envisions a future where buildings facilitate liberation. 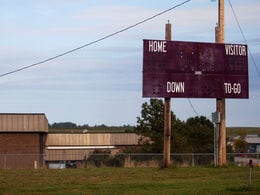 School Buildings Were in Trouble Even Before COVID-19

Many of America’s public schools are in need of major repairs, especially in low-income communities.

Turn of the Decade: Looking Back, Looking Forward

7 Non-Negotiables for Supporting Trans & Nonbinary Students in Your Classroom

A Poet Misses Those Moments Between Classes