The Power of an Excellent Education

Two Teach For America alumni share how their educational experiences led them to become fierce advocates for students in their communities.

Greg Wong and Caine Lowery saw their lives take a dramatically different course from that of their friends and family, as a result of the excellent education and opportunities they received. As classroom teachers, they met bright students with incredible potential and deepened their perspective on how expectations and access to opportunity can shape life outcomes. 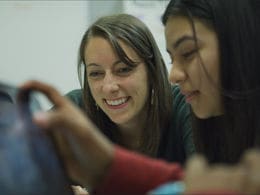 Unexpected Paths to the Classroom

Two Teach For America alumni discovered their true calling was waiting for them where they least expected it.
Watch the video.

Redefine opportunities for students—and yourself—by applying to teach as part of the 2020 Teach For America corps.

You Have the Power to Make Transformational Change

Greg Wong (Greater Delta ’99) remembers hitting a point in his high school career when he started to notice that he wasn’t on the same path as some of his friends who were already getting caught up in the criminal justice system. As an honors student, he was exposed to classmates from different socioeconomic classes and realized that life could look very different.

Caine Lowery (Metro Atlanta ’06) grew up in Portland with his single mom. He remembers noting how different his own educational experience was from that of his parents. His father only finished fifth grade and went to prison before Caine was born, where he later passed away.

Both Caine and Greg were drawn to teaching because they saw it as a revolutionary act—a way to change life circumstances and do right by the people you represent. Their teaching experience was eye-opening.

Caine taught fifth grade in an Atlanta school that was described as “tough.” But what he discovered were committed, hard-working teachers, caring families, and kids that were capable of success. The negative narratives that too often define students in low-income communities did not match up with reality.

Greg taught in a rural school in Mississippi during the late 90s, at a time when a nationwide effort was underway to make sure that all schools had internet access. However, he discovered that his school had no computers, which meant that his students were being left behind.

After the corps, Greg and Caine have focused their careers on solving for what kids in under-resourced communities need most. Caine moved back to Seattle and has spent the last decade at Aki Kurose Middle School, where he is now an Assistant Principal. Greg has also spent the last 10 years in Seattle, practicing law and helping shape public policy that impacts the lives of Washington students and their families.

Being in the classroom showed Greg and Caine that there are systemic issues at play that determine a child’s access to a good education, no matter where they live in the country. Their experience also gave them the conviction that there are systems that we as a society can change, that can actually change kids' lives.

This Community Set Out to Bridge the Digital Divide

What's Possible for Appalachia’s Schools When Internet Isn't an Issue

How Rural Students Are Left Behind in the Digital Age