A handful of companies are starting to provide a novel benefit: a coach to help parents navigate school and higher ed systems 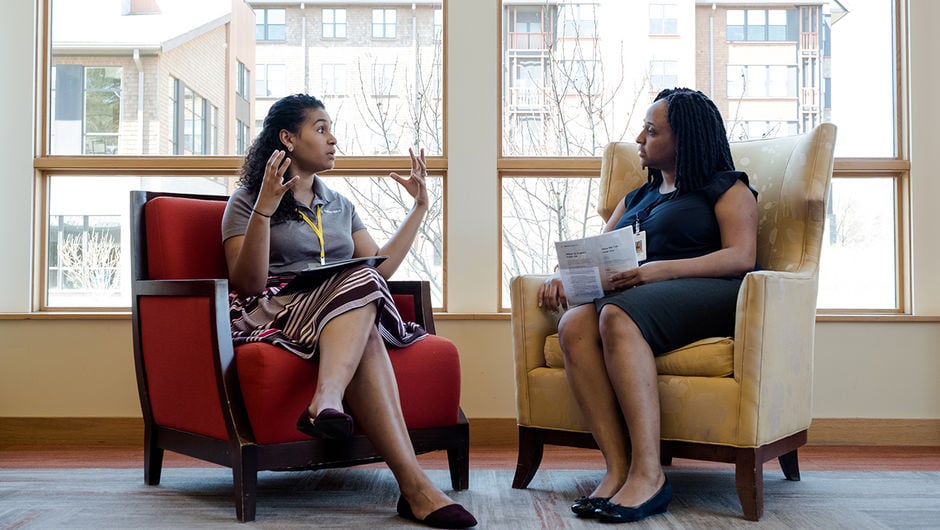 While meeting with Arlene Sanchez (left), the guide who is helping her navigate the school system, Orthelande Jean learned that even before her son starts school, he may be eligible to get help with his speech.

At a cafe at Hebrew SeniorLife, a provider of senior care services in Dedham, Massachusetts, Arlene Sanchez (Massachusetts ’13) settles into an easy chair opposite Orthelande Jean, an accountant for the senior center. “OK. So how was it, girl?” Sanchez asks.

Jean, who has a 4-year-old son, shares details of her recent visit to the charter school her son will attend this fall. “I met the music teacher,” she says. “And they have dance: tap and jazz. He’s going to love that.” Sanchez nods her head in approval, tapping notes in her laptop. But this parent has something else on her mind: Her son needs a speech therapist, and she’s worried about the cost.

“I’m so glad you brought it up,” says Sanchez. “You don’t need to pay out of pocket.” She tells Jean that, as a public school student, her son may qualify for a free evaluation and sessions with a speech therapist, paid for by the school. Relief washes over Jean’s face. “If the district could help, that would be awesome.”

Sanchez works for EdNavigator, a nonprofit that contracts with companies to provide an unusual benefit to their employees: highly personalized support to working parents and adult learners who are trying to traverse the complexities of their local school systems and higher education options. Companies match their employees with “navigators” like Sanchez, a former Boston public school teacher, who function as a cross between an expert consultant and an education concierge.

“Arlene has been a saving grace for us,” Jean says later. “We were just going to send him to a school across the street from our house. But Arlene said, ‘As a parent, you have choices. What do you want?’ I realized I did want him to have the arts, and I wanted diversity. So we were able to find a school that fit him.”

“If we don’t have strategies that acknowledge parents as our best asset in education, we’re doing it wrong.”

EdNavigator employs ten full-time navigators in New Orleans and greater Boston—former teachers, guidance counselors, and social workers who possess an insider’s knowledge of local school systems and resources, as well as professional networks they can leverage on behalf of the families they counsel. And the service they provide isn’t just for parents of school-aged kids. Half of Hebrew SeniorLife’s EdNavigator users are adults pursuing their own educational goals: earning GEDs, finishing college degrees, and learning English.

In a given week, Sanchez may spend her time researching special education options for parents who are unsure if their children are receiving appropriate services; organizing college visits; and even, as she did recently, accompanying a Spanish-speaking father to a parent-teacher conference where she served as a translator.

Still, with 52 families (and counting) in her caseload, Sanchez says her role is to provide information and make connections, and then to step back. “I want families to understand that I’m here, but this is not a service you will need forever. You can do this, and I want you to take the lead.”

EdNavigator’s founding partner Tim Daly (Baltimore ’99) says most educators agree that parent involvement is essential, but too often families in lower-income communities are perceived as disengaged or unavailable. But for working parents with rigid schedules or those who don’t speak English, Daly says, “the school landscape can be an unfriendly place.” EdNavigator’s mission is to step into that space and stretch out a hand to families who may feel intimidated by the system. “The family is the engine of love and care and momentum for the child,” Daly says. “If we don’t have strategies that acknowledge parents as our best asset in education, we’re doing it wrong.”

Daly says it was clear from the start that EdNavigator’s mission should be not merely to involve parents, but to empower them to become their child’s best advocates. The business model, however, was less obvious. Would companies pay to provide this benefit for their employees, just as they do for health or dental plans?

When shopping around the concept, “the amount of positive feedback we got was zero,” Daly says, laughing. “Everyone said, ‘No one’s going to pay for it.’”

They were wrong. Since launching in 2015, EdNavigator now contracts with 19 partners in New Orleans—including major hotel chains like Marriott and Sheraton—and recently gained its first client in the greater Boston area. Employers pay between $30 to $40 per month for each employee actively working with a coach like Sanchez. EdNavigator subsidizes other costs with external fundraising.

Daly concedes that EdNavigator’s expansion depends on finding socially conscious companies with strong stakes in their local communities. “Without the partnership of employers, we can’t do this,” he says. “There’s no requirement that says companies need to get involved with education.”

“In my mind, this was a two-fold investment,” says Jennifer Weishaupt, owner of the Louisiana-based Ruby Slipper Café, who is piloting EdNavigator at one of her eight restaurants. “In part it’s an employee benefit, but broader than that, the benefit is felt in the next generation of kids—and ultimately the next generation of successful citizens of New Orleans.”

And the benefits aren’t just feel good. In a recent survey of EdNavigator’s employer partners, 93 percent reported that the service has boosted employee morale, and two-thirds said it has had a positive impact on retaining workers—a significant return considering the New Orleans hospitality sector had a 60 percent staff turnover rate in 2015.

For employees and beneficiaries like Jennifer Gibbons, a geriatric social worker for Hebrew SeniorLife, EdNavigator has unquestionably upped her loyalty to the company. Gibbons’ 16-year-old son has a rare condition involving hearing loss and intermittent episodes of vertigo and exhaustion. Arlene Sanchez helped Gibbons identify documentation needed for SAT accommodations and located colleges that could support his needs.

“It was beyond what I expected,” Gibbons says. “There was all of the research she did, but then she said, ‘Who’s supporting you?’ I was just shocked. She said, ‘Well, I’m going to support you through this.’ It was incredibly meaningful. I know she’s got my back and my kid’s, too.”