Making Social-Emotional Learning Work for Everyone

As school districts expand social-emotional learning in the classroom, experts are working to create the right assessments to support systemwide growth. 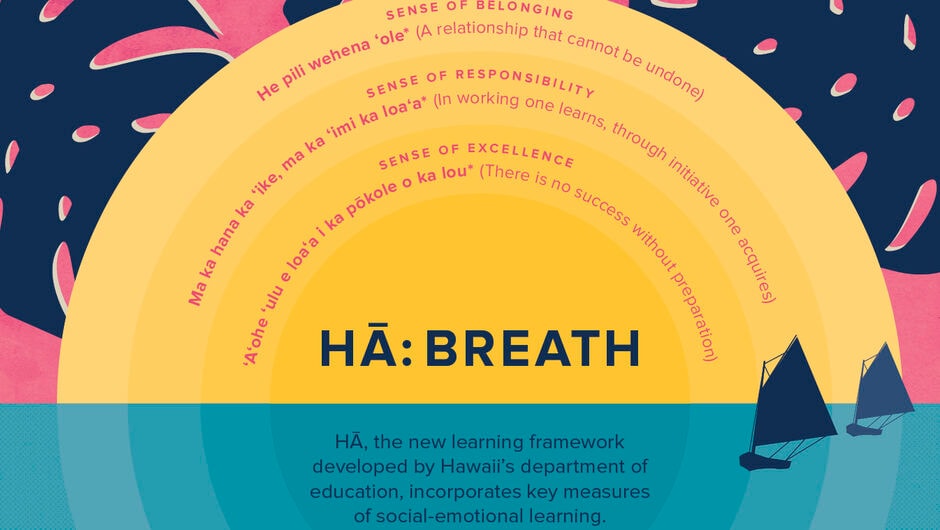 About Social and Emotional Learning

Social and emotional learning (SEL) is the process through which children and adults understand and manage emotions, set and achieve positive goals, feel and show empathy for others, establish and maintain positive relationships, and make responsible decisions |From the Collaborative for Academic, Social, and Emotional Learning (CASEL)

In February 2019, fifth grade teacher Bill Chen (Hawai‘i ’13) took his students on a field trip to a plot of ancestral Hawaiian land called Maluaka, where they sank their hands into the rich volcanic soil. They planted taro, a staple of the Native Hawaiian diet that’s considered a sacred connection to ancestors. Then they helped to harvest the taro that Chen’s fifth graders planted last year.

This was more than a breakout from their classroom at Kahakai Elementary in Kailua Kona. The field trip was an effort to build on the work Chen had pursued all year to help his students develop socialemotional skills and mindsets: feelings of belonging and confidence and ways of building positive relationships. While at the farm, after they had harvested the taro, Chen’s students reflected on the work they accomplished, the island land they call home, and their unique place—their belonging—in the life of their community.

More than a decade of robust research has solidified the importance of social-emotional learning, or SEL, to student wellbeing and long-term success. States and districts are paying attention: Today, at least 14 states have SEL standards for students in grades K-12. In 2011, only 1 did. But with standards come assessments. Mindful of past fallout over teacher assessments, educators and researchers are demanding districts approach SEL growth holistically. And in many places, leaders are listening.

In Hawai‘i, SEL is a part of the state’s new set of desired outcomes for everyone in the school system, from students to the state superintendent. The standards are called Nā Hopena A‘o, or HĀ (which translates literally as “breath”). Alongside desired outcomes like a sense of belonging and a sense of excellence, HĀ includes a sense of aloha, a word with deep roots in the Hawaiian language encompassing compassion, welcome, and love for oneself and others. “HĀ is everywhere” has become almost a mantra throughout the district.

SEL spans a wide range of behaviors and beliefs, often designed—as in Hawai‘i—to reflect local context and values. In a 2011 analysis of more than 270,000 students nationwide, published in Child Development, researchers found that those exposed to SEL programming in school demonstrated improved attitudes, behavior, and academic performance, linked to an 11% gain in achievement. 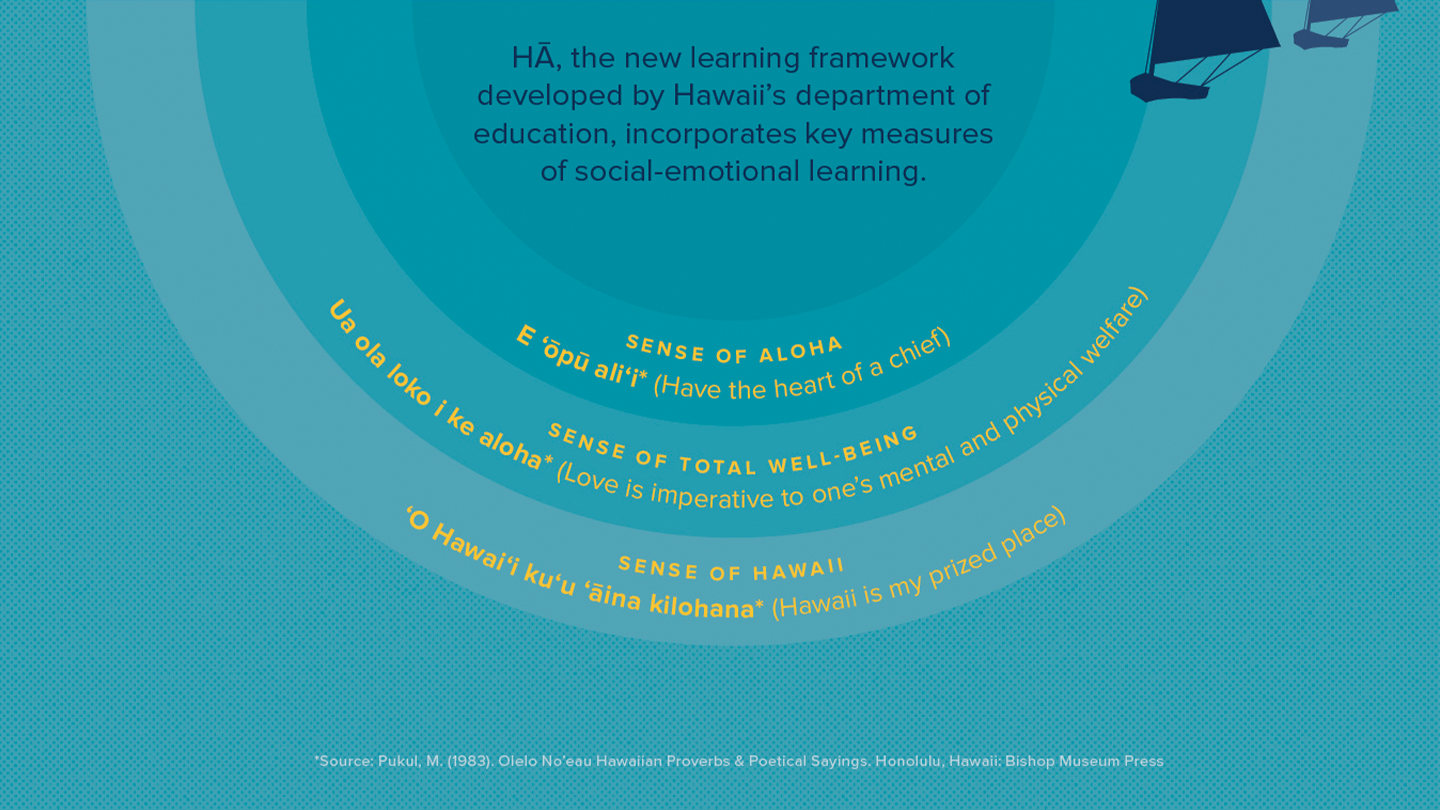 Companies such as Panorama Education and Tripod Education Partners, led in part by alums including Sejin Mong (Indianapolis ’11) at Panorama and Sarah Phillips (Bay Area ’97) at Tripod, work with districts to collect measures of students’ SEL growth. They compile the data into a dashboard that allows educators to see student trends around SEL measures, attendance, and academic progress. The nonprofit PEAR Institute, based at Harvard University, and Stanford University-based PERTS offer districts similar services and assessments. CASEL, a national nonprofit aimed at making high quality SEL an integral part of education beginning in pre-K, offers a guide to help educators sort through the many assessment options.

Ally Skoog-Hoffman (D.C. Region ’06) works for CASEL as its director of research-practice partnerships. In that role, she works closely with CASEL’s 21 partner districts, serving nearly 1.8 million students, to help take SEL from theory to classroom implementation.

Increasingly, schools have some sort of SEL programming in place, she says. The next frontier is getting assessments right so that they support continuous improvement. “In the wider education world, data has at times been used as a ‘gotcha’ device, a sort of finger-pointing,” Skoog-Hoffman says. A litany of variables makes it virtually impossible to hold individual teachers accountable for individual students’ SEL growth, so schools would make a mistake to try, she says. “It’s really important that our districts are harnessing the assessment of SEL skills to inform continuous, systemwide improvement,” not to call out individual teachers.

Washoe County School District, serving 64,000 students in and around Reno, Nevada, partnered with CASEL in 2012 and opted to purchase Panorama’s assessment tools and dashboard. The dashboard revealed gaps between student groups that had never come to light. For example, middle school boys and girls both reported difficulties in dealing with their emotions and stress levels (no huge surprise to anyone who has worked with middle schoolers).

But while boys’ abilities bounced back significantly in their high school years, girls’ abilities improved at a more anemic pace. As a result of the new data, Washoe applied for and won a grant to engage students in analysis of district SEL outcomes. Through student data summits, about 150 middle and high school students came together to talk, among other things, about how they process emotions and what could help them do it better.

“It’s really important that our districts are harnessing the assessment of SEL skills to inform continuous, systemwide improvement.”

When SEL initiatives are at their best, teachers and staff engage as deeply as students do, says Courtney Franklin (Chi-NWI ’01). Franklin works on Teach For America’s data team, where she serves as an internal SEL thought-partner and works with regions to advance corps members’ understanding of SEL in their classrooms. She is also a member of CASEL’s national SEL practitioner advisory group. When teachers, staff, and school leaders feel supported in honing their own SEL skills, she says, those adults can model them authentically for students.

This can become important when teachers are asked to respond in constructive and sustainable ways to feedback generated by SEL assessments that can seem personal. For example, learning that students don’t feel respected in your classroom feels different from learning that your students didn’t quite meet state math standards. “Your social-emotional competencies play out as an adult,” Franklin says. “Can I take this feedback and can I react to it in a healthy way? And can I use it in a healthy way for my students?”

Chen, who spent the summer at a principal training program in New York City before returning to Kahakai Elementary for the 2019-20 school year, carried the lesson with him. Reached over the summer, he said, “I am in grad school thousands of miles away. But when I think about excellence it’s not just an A on an assignment. It’s, ‘Am I representing my community? Am I improving my community?’

“That’s the beauty of HĀ,” Chen says. “It doesn’t exist just in the classroom.”

How to Incorporate Social-Emotional Learning in Your Classroom

The Power of First Impressions

6 Tips for Teaching Students With Autism

With a growing number of children who have autism in school, here are some steps teachers can take to help them learn, academically and socially

How to Harness the Power of Parent Connection