By learning computer science, teachers can bring diversity to the field, advocate for K-12 computer science education for all students, and challenge harmful stereotypes about who belongs in tech. 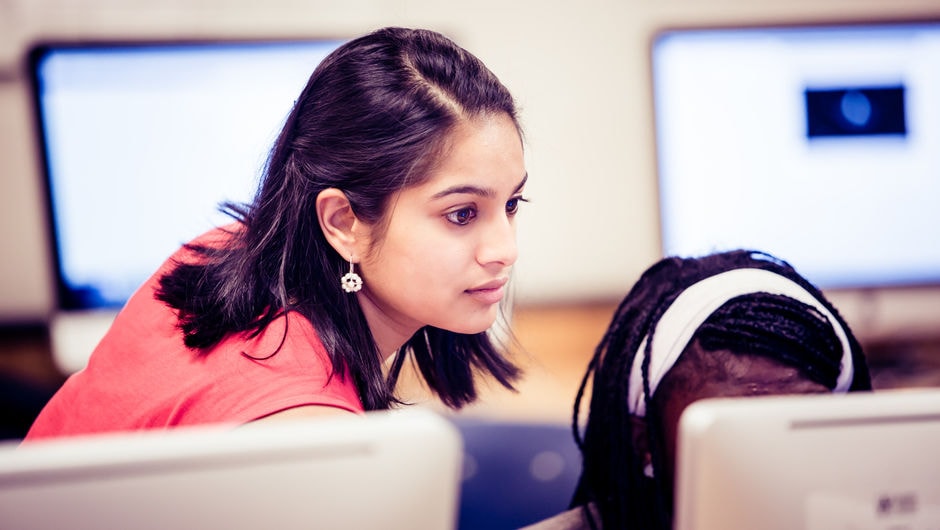 Although computer science jobs are among the highest-paying, fastest-growing jobs in the U.S. economy, it’s estimated that only a quarter of our nation’s schools offer computer science education. This deficit in comprehensive computer science classes particularly impacts students of color and those from low-income communities.

Inequitable access to computer science curricula does more than hurt the economy. It can also send harmful messages to students that coding isn’t something that they can do and that careers in computer science are not for them. When groups of people are left out of the conversations that shape the apps we use and the technology we rely on, we fail to identify and solve problems that impact underserved communities. Innovation suffers.

Too often, adults also feel that it’s too late for them to begin learning computer science, and that coding is only for young geniuses. Even teachers can succumb to this type of thinking. But those who take a chance with coding lessons not only find that they can learn, but that gaining computer science skills helps them become better educators and stronger advocates for diversity in tech and expanded K-12 computer science education access for all students.

From Learning to Code to Teaching Others

Reuben Ogbonna (Metro Atlanta ‘12), who majored in economics and taught high school math during his time in the corps, was determined to make sure his students had the chance to study coding in school--an opportunity he didn’t have growing up. “It was my goal to make the computer science field something that seems appealing and attainable for my students,” he says.

He leveraged the power of massive open online courses to learn alongside his students. Motivated by their curiosity and enthusiasm, he decided to take his learning further by participating in a summer program at the Flatiron School for teachers without formal computer science training. In each city he taught, from Atlanta to Brooklyn, Reuben was able to call on his network of peers in the industry and leverage the expertise of local computer science enrichment organizations to spark the interests of his students. Six years later, he is now launching a program of his own.

This past fall, Reuben founded the Marcy Lab School. And with the help of volunteer instructors and mentors of color, he has been able to provide computer science enrichment programming to underserved schools and community organizations in Brooklyn. Next fall, they will be piloting a full-time program for recent high school graduates, designed to prepare them for entry-level jobs in web development. Reuben wants to empower young people from underrepresented backgrounds to become engineers, and ultimately, entrepreneurs, knowing that they will go on to create products and companies that provide solutions to the unique problems that their communities face.

“I remember saying, ‘Although I didn't go to a high school that offered this type of computer science coursework, and although I didn't have access, my students won't miss out in the same way that I did.’”

Why Teachers Should Learn to Code

Learning to code certainly isn’t easy, but with patience and dedication, anyone can learn it, regardless of their age or familiarity with technology. And for teachers, the impact you can have in the classroom through computer science education can be the fuel needed to get through those hours of practicing Ruby, HTML, and CSS.

Here are some reasons to add “learning to code” to your New Year’s Resolution list:

The diversity gap in computer science is a serious and self-perpetuating issue. Because young children of color and girls don’t see people in tech who look like they do, they don’t believe that they belong in the field of computer science, and are far less likely to pursue careers in it.

Michelle Kruk (San Antonio ‘17), a middle school science teacher in San Antonio, was eager to teach a subject where she could have a strong impact and encourage her students to see themselves in science and tech careers.

“I think science is one of the most emancipatory subjects, yet it has been historically whitewashed and made to be one that actually reinforces a lot of the systemic oppressions that we see,” she explains. “For a topic that requires and that demands creative thinking and multiple modalities of thinking, it is really, really astounding and troubling to me that the coding community does not have a more diverse group of people.”

Although the school districts around where she teaches in San Antonio don’t typically offer computer science or coding classes before high school, Michelle has pushed for coding classes in her school’s curriculum. She wants her students to envision computer science as a career option early on in their education. “I have a lot of students who are really interested in video games, or who have been doing really well in science, who are trying to figure out, ‘Well, what can I do with this?’ Michelle says.

But for those who didn’t get the opportunity to learn to code as child, and would like to learn as an adult, Michelle advises: It’s not too late, and you’re needed.

“I’m excited to instill in my students, but also in people in general, that you need to get involved in the computer science community. You might not know either what you could contribute as far as identifying issues that need to be solved or in providing a creative, unique way of thinking about it,” Michelle says. “Coding isn’t coding if it’s not diverse.”

Increase Opportunities in Tech for Kids

Reuben learned to code as a way to carve his own niche in the intersection of educational equity and technology. A number of Teach For America alumni use their skills in computer science to expand access to STEM and computer science education for underserved children in their own unique and exciting ways.

Tara Tran (Charlotte-Piedmont Triad ‘16) who currently works as a recruitment manager for Teach For America, uses her skills teaching computer science as a coding instructor at Kode with Klossy, a free summer coding camp for girls 13-18 across the United States. Kode with Klossy seeks to empower women and address the growing gender gap in the computer science workforce.

If you teach social studies, you could highlight significant people and events in computer science through lessons about computer science pioneers, weekly current event searches about technology, and other activities that help students to connect to computer science on a personal level. If you’re an English Language Arts teacher, you can have your students code their own basic computer games based on assigned novels in your curriculum, helping them to develop valuable proofreading skills needed both in writing and in coding.

These are just a handful of examples. Much like the programs that can be created through code, the different varieties of cross-curriculum computer science lessons you can bring into the classroom are truly limitless.

There are more computer science professional development programs for teachers than ever before. Here are just a few programs that can help you learn to code and empower you to incorporate computer science into your curriculum through effective lesson plans.

●    ECS Fellowship - The Exploring Computer Science (ECS) Fellowship is a two-year program designed to develop teacher leadership within high schools and communities through computer science (CS) advocacy. ​The fellowship is open to current Teach For America corps members and alumni in secondary schools, regardless of computer science experience.

●    Code.org -- Are you an elementary school teacher who wants to introduce the fundamental of computer science into the classroom? Code.org offers professional development workshops across the U.S. for teachers grades K-5. In this workshop, teachers get an intro to computer science and pedagogy, a curriculum guide, strategies for “unplugged” computer science activities, and more.

Learn More About CS Through Service+Tech

Why It's Important to Break Computer Science Stereotypes

The Herculean Effort To Bring Computer Science To All Students

5 Leaders Who Are Empowering Students Through STEM Education