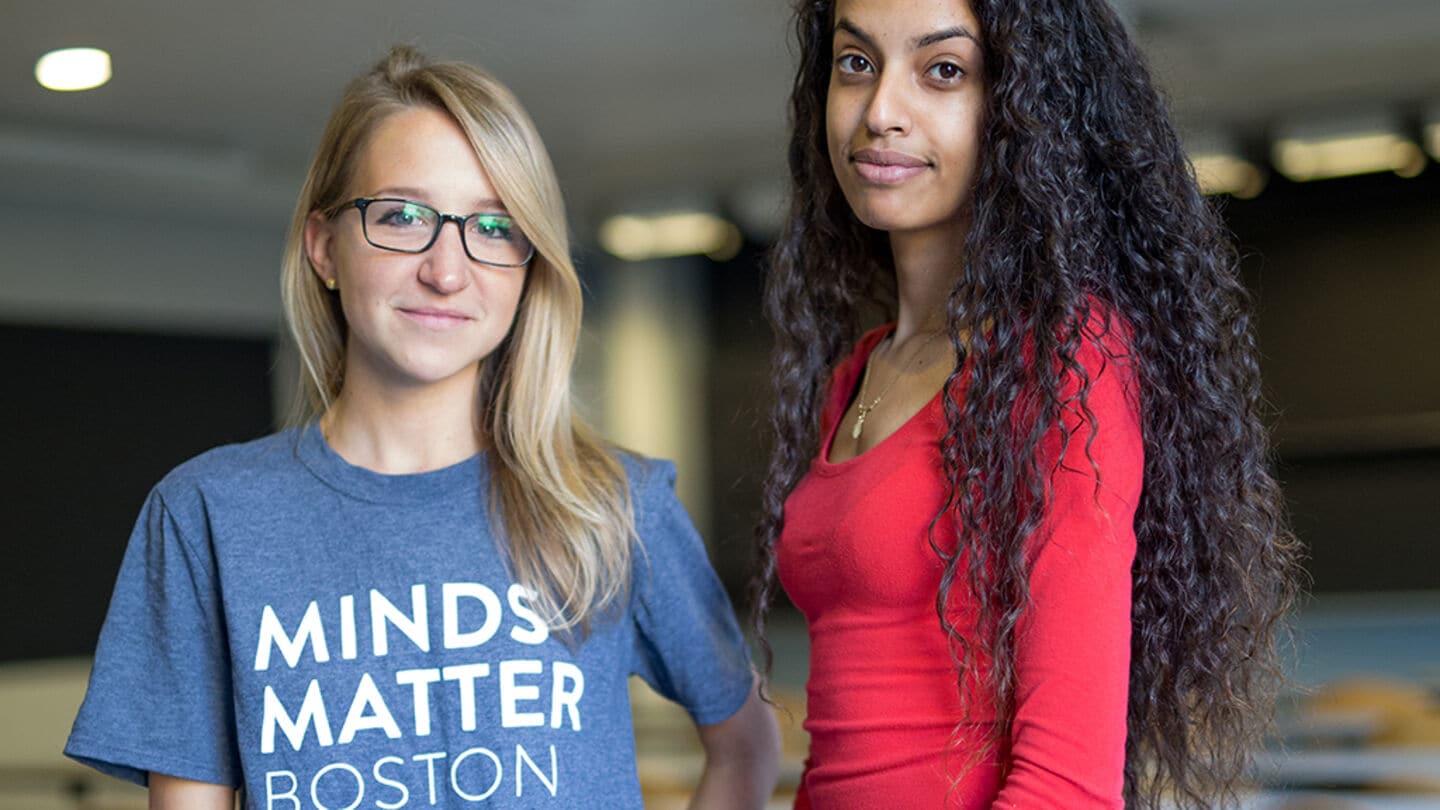 Homeless and in College: How Luz Villar Did It

A remarkable woman who grew up in foster care shares her story.

In the fall of 2016, Minds Matter Boston, a nonprofit that supports college access for students from families with low incomes, invited Luz Villar to share her story with a group of high school sophomores and juniors. With her warm smile, long dark hair, and slender frame, Luz, then 25, looked more like a teenager than an aide to a Boston City Council member.

Luz was 9 the day child protective services removed her and her siblings from their mother’s home. She and her younger sister remained together, but her brothers were sent to live in different foster homes. She wouldn’t see them again for two and a half years.

The girls moved every few weeks or months. Over the course of the next four years, they drifted through 15 foster homes and attended four different schools, passing through a revolving door of caseworkers.

Luz did her best to keep her grades up, but the constant disruptions made it difficult. Socially and in her classes, Luz became guarded and kept to herself. “I wouldn’t raise my hand if I knew the answer,” she recalls. “I didn’t want to connect because I’d knew I’d just have to disconnect.”

At the Minds Matter gathering, she told the students about how she tried to attend college while she was homeless, dropped out, and ultimately found a way back.

“The room went completely quiet,” says Minds Matter Executive Director Rachel Kanter (Metro Atlanta ’12). “The kids were in tears. Luz helped them embrace their own stories, not as a point of pain or shame but as a source of empowerment.”

One year later, Luz returned to speak to the students again on a Minds Matter panel. A 16-year-old junior named Fatima said she felt an immediate kinship with Luz because of their shared Puerto Rican roots. “My parents didn’t go to college, and I don’t know how we’re going to pay for it,” Fatima said. “I love that Luz overcame her obstacles and found her passion. She graduated from college—that really inspires me.”

Luz’s story affected Kanter, too. She began to ponder why Minds Matter served no foster students. “We ask our students to come to MIT every Saturday from September to May,” she says. “If you’re switching homes and don’t have continuous support or transportation, how could you meet that requirement? There’s an inadvertent selection bias for students who have stability. It’s made me think about how difficult it is for kids like Luz to even participate in programs that level the playing field.”

Luz knows she is an outlier. She shares her story as a way to speak up for foster youth who don’t have a voice—and to show them there can be light at the end of a dark tunnel. “There were so many times when I was on the verge of falling, but I was blessed to meet people along the way who held me up,” she says. “I want to be that person for them.”

In the spring of 2012, Luz Villar found herself walking a tightrope with no safety net. She was a sophomore at Boston Architectural College, staring down the last of her scholarship money. There was no going home. Since she’d left her mom’s apartment in South Easton, Mass. two years earlier, at age 18, Luz had been a homeless college student, crashing on friends’ couches or in cheap motel rooms and subsisting on whatever she could microwave.

Just two years earlier a good job and an apartment of her own seemed within Luz’s grasp. She had graduated from high school, something no one in her family had done, and been accepted by Boston Architectural College with what seemed like a decent financial aid package. To call it a dream felt inadequate. This was salvation.

The money hadn’t come easily. Unable to qualify for loans, and with no family members to co-sign, Luz was forced to navigate reams of paperwork to file for aid as an independent. Even small costs—say, the $150 deposit to hold her spot at college—sent her scrambling. Her part-time job as a cashier at Best Buy barely covered groceries.

By the end of her sophomore year, with scholarship funds running out, Luz just hoped to complete the semester. She stayed up all night finishing her final project, a model representing a transverse section of a building she had designed. “When I got on the bus, it was so packed the doors closed on my project, and it collapsed,” Luz recalls. “I sat down on the sidewalk and just cried.”

Her advisor at the college suggested that she quit school and return when she had saved up the money. “Even I knew that wasn’t realistic,” says Luz. “I was working retail and making maybe $10,000 [per year] after taxes. It felt hopeless.”

Coming to terms with dropping out of college was devastating. “We’re talking 14 years of sacrifice, one thing after another. I was so broken. No home, no parents, no degree,” she remembers thinking. “My little brother used to tell me, ‘I look up to you.’ And who am I? He’s not going to look up to me anymore.”

What are the odds?

That Luz made it to college at all is remarkable. The obstacles Luz faced—daunting financial pressure and homelessness—are common among students who have spent time in foster care.

“I wish I could say her experience was unique, but it’s actually quite typical,” says Maura McInerney of the Education Law Center. “Forty percent of foster children end up homeless after aging out of foster care.”

McInerney says chronic instability is the root of many problems. More than a third of 17- and 18-year-olds in foster care have experienced five or more school placements, and the constant upheaval can wreak havoc on learning. Studies show that children lose roughly four to six months of academic progress each time they change schools. Foster youth are twice as likely to be suspended from school and are expelled three times more often. Unsurprisingly, foster youth drop out at double the rate of their peers.

“Those of us who are parents know what it’s like to advocate for our kids,” McInerney says. “Sadly, foster children don’t have that essential advocate.”

Without consistent adult advocacy, school transfers often result in missed credits, lost records, delays in enrollment, and a greater risk of a child being placed in an inappropriate school setting. Many foster students don’t receive needed interventions, while others are misdiagnosed with learning disabilities.

“I never thought I would have this peace, I know no one is going to come in my house and take me. This is my home. This is real.”

For the few who get into college, the path can be intimidating. McInerney says many students don’t know they can file as independents and receive financial aid. Mundane hurdles such as lost school transcripts or birth certificates—typical snags for highly mobile foster kids—can jeopardize access to scholarships and other crucial supports. And like Luz, many former foster care students don’t have permanent residences during college, turning standard breaks between semesters into nerve-wracking predicaments.

After Luz dropped out of architecture school, she was despondent. Then a friend told her about Year Up, an intensive yearlong training program for low-income young adults that teaches workforce skills and matches students with corporate internships. It sounded too good to be true, but she applied and got in. Her turnaround has been nothing short of astonishing. After completing Year Up in 2013, Luz was hired as a full-time associate by State Street, the global financial services firm where she interned. While there, she also earned a year’s worth of college credits at Cambridge College through a Year Up partnership.

After a year of working at State Street, Luz reached another milestone—she put down a security deposit on her first apartment. On Valentine’s Day 2014, she moved into a sunny three-bedroom with two roommates in Dorchester, 20 minutes south of Boston. She had been taking night classes toward her degree, and finally having a stable home changed everything. “You can see it in my transcript,” Luz says. “My grades went up instantly.”

The next year she was promoted to management, but when she learned of a job opening with at-large Boston City Councilor Ayanna Pressley, Luz jumped at the chance. In March 2016, she started her new job as the councilor’s scheduler and Latinx community liaison.

Luz hopes to pursue public policy reform and wants to find a way to work directly with students in foster care. She has been mentoring a young woman as a Big Sister for six years. “My ‘little’ and I got paired up when she was 12—now she’s 18,” Luz says. “We’re inseparable. I thought, for her I can be that person I needed but never had.”

And in June 2017, seven years after she first enrolled at architecture school, Luz graduated from Cambridge College with a degree in business marketing.

These days, Luz savors being in control of her own story. “I never thought I would have this peace,” she says. “I know no one is going to come in my house and take me. This is my home. This is real.”

In her bedroom, Luz keeps the drafting table from her days in architecture school. The desk is cluttered with art supplies and stacks of sketchbooks filled with drawings and elaborate graffiti tags. Every few months, she shows her newest paintings in local art galleries.

On the wall hangs a striking canvas that features the silhouette of a young woman running, with streaks of black paint streaming out behind her. “Someone offered me $500 for it at a show, but this one’s my favorite,” Luz says. “It’s called Letting Go.”

Fostering Independence, One Student at a Time

Teachers and Administrators, Encourage Students Like Me to Dream Big