Historical Movement Building in Native California and Beyond

From the heart of California, a second-generation alum leads a healing and racial justice movement to protect sovereign nations and honor the sacred—restoring Native land and people. 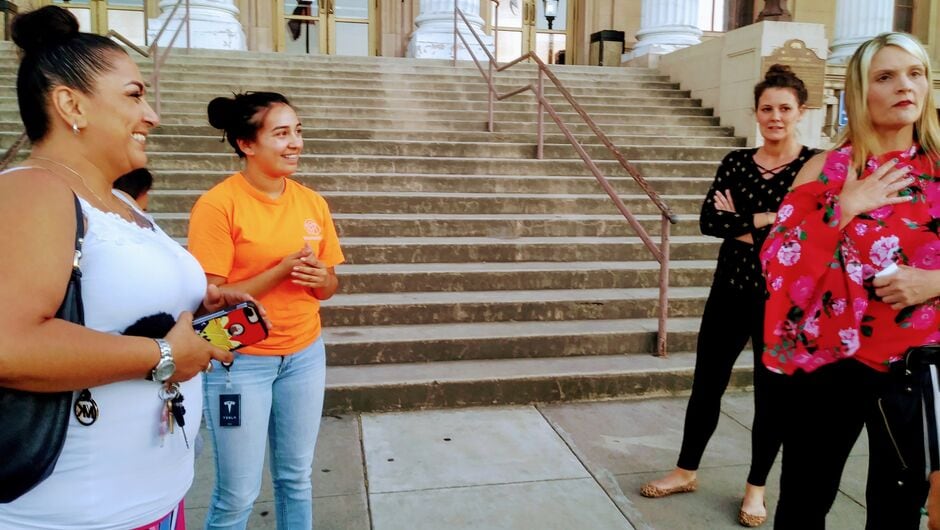 California is home to more Native People than any other state in the country with more than 100 federally recognized tribes and close to one million American Indian people. But being that the state also contains about one-third of the population of the United States, this major community often lacks visibility. However, this is changing rapidly. This past year has been monumental across the state of California with strides being made in the political involvement, recognition, and public education about tribal peoples. These strides have been the culmination of years of grassroots advocacy and a new generation of Native leaders.

Joining Wendy Kopp and Michelle Obama, alum Percilla Frizzell (Dinè) was welcomed into the lifelong Echoing Green community as a global fellow this year. Inspired to see the first "second-generation" corps member--one who is herself a former student of a Teach For America corps member--named as part of the next generation of global social impact leaders, Wendy Kopp expressed the importance of proximity, “Fighting for her Native communities, Percilla is the kind of community-rooted leader we need!” Founded by Frizzell and her formerly incarcerated husband (Shoshone), Sacred Generations is a healing and racial justice movement organizing system-impacted tribal communities to end educational inequity, mass incarceration, and climate injustice in Native California. The founders describe their vision as “an intergenerational movement of medicine fueled by our Indigenous worldview of healing to protect sovereign nations and honor the sacred.” Thus the scope of their work is vast, but so is their familiarity with the challenges. And they are not alone in their fight.

Percilla serves on the national Native Alliance advisory council for Teach For America. Recently, Sacred Generations and Native Alliance leaders joined families from the Suquamish tribal community in a prayer walk for Missing and Murdered Indigenous Women. Frizzell described the experience as “an opportunity to heal with relatives of the Pacific Northwest and highlight the intersectionality of national Native movements,” she said. “Educational inequity, mass incarceration and climate injustice are interconnected problems and we're building the power of sovereign solutions to drive transformative systems change.” Frizzell also said that the intergenerational force of strong women such as the warriors fighting for Mauna Kea, Pua Case and Hawane Rios, are her medicine in this movement.

Restoring the Land and People

Public education has long been an obstacle of progress in accurately and fairly serving the legacy of tribal people in a state that educates 1 in every 8 children in the nation. As an advocate and mother of four children, Frizzell said she notices that Native students are not learning through a traditional lens in mainstream education experiences. Her older son attends middle school and has been taught by three corp members in his educational path so far. In spite of this long-standing teaching in public school that has largely minimized Indigenous Peoples in history, there has been recent progress to potentially remedy this disparity. One example of this is the decision to eliminate the requirement to teach about the California Mission era to third grade students. This period of history subjugated tribal people into forced labor, coerced abandonment of their customs and traditions, as well as decimated at least tens of thousands tribal people across the region. Yet, the period had been largely glorified in California classrooms. But now, teaching this subject is no longer mandated in state standards.

Further, it has been mandated by the state that California Native history is taught at the high school level.  But the support of Native advocates is crucial in order for new policies, such as this, to be implemented effectively. “Indigenous communities have to define what educational excellence is for our children and it ironically entails the traditions colonizers tried to take away from us yet failed,” Frizzell said. “Our culture was historically outlawed until the American Indian Religious Freedom Act of 1978 yet Indigenous rights are still violated through a diverse set of policies and practices in many institutions such as schools, prisons, local and federal governments.”

Sacred Generations is proud to announce a new network of emerging civic leadership in Native California called Sacred Sisters. This fellowship aims to build and catalyze the next generation of system-impacted leadership for systems change movement building. Alyzea Deputron (Apache), a powwow princess majoring in political science at UC Davis, has been announced as a founding fellow for her work advocating in her hometown just months before the first Native women were elected to Congress. “America hasn’t experienced true justice until elected leaders represent original peoples,” she said. 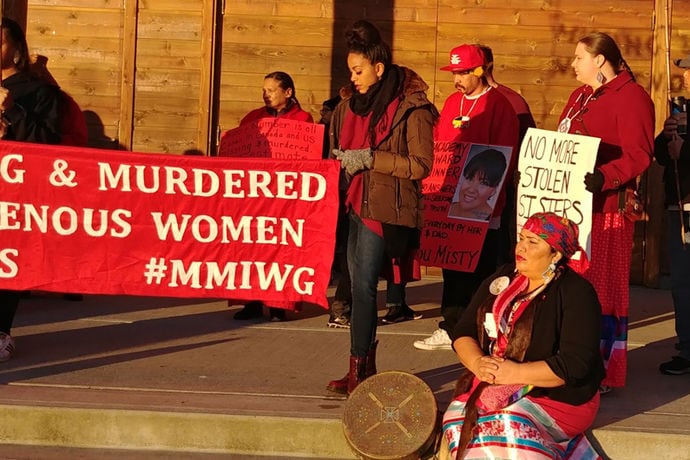 Deputron leads her Native community in the Capital Central Valley, where she challenged the mayor for hosting a tour of the city with banks that are financing Indigenous rights violations in his hopes to attract investments to reinvent the city located on occupied Yokuts homelands. “Imagine having elected leaders with limited knowledge and respect for the stolen land they call home. It’s harmful to Native communities and movements,” she said. “It most likely stems from their western educational paths but only continues from their lack of solidarity by choice. Our work is giving them an opportunity to restore their relationship with Native land and people through decolonized policies and practices because there is no justice without Indigenous justice.”

Deputron said she is fighting for a groundbreaking policy in Stockton Unified to divest the district from institutions that finance fossil fuels. “The proposed divestment policy is to Native families what an existing sanctuary policy is to undocumented immigrant families – it protects our physical, psychological, emotional and spiritual safety,” she said. “How can Native students learn in an environment that prioritizes partnerships with irresponsible financial institutions violating treaty rights before our wellbeing and future?”

Further, Deputron said she believes that real investments are not short-term resources from institutions that were designed to maintain wealth for the status quo but rather should be about building sustainable solutions that benefit communities long-term such as public banks that aim to address economic justice and power, a new movement California is leading in Los Angeles and San Francisco. Deputron said, “There’s a pattern amongst our most respected and honored elders. They were all told they were too political throughout their life. What does that trend tell us?”

Other bold yet long overdue policies include replacing Columbus Day with Yokuts Day in an effort to recognize the Indigenous homelands that Stockton occupies. This policy follows a wave of cities, counties and states nationwide that replaced the settler-established holiday with Indigenous Peoples Day. Some local tribal elders are hopeful that recognition of Indigenous land by local governments can be one pathway for dozens of California tribal communities to gain federal recognition. In addition, Deputron leads efforts advocating to replace Thanksgiving Day with A Day of Remembrance, declare a Day of Awareness for Missing and Murdered Indigenous Women, and most importantly, adopt a policy requiring the City of Stockton to evaluate the social responsibility track record of partners.

Deputron describes educating the public as an essential part of advocacy. Additional efforts from leaders statewide are successfully removing representations of expansionist policies which annexed tribal lands in the western United States, including Hawaii. Frizzell described the process of systems change, “Narratives are powerful or potentially dangerous because they can shape irresponsible policies that cultivate toxic conditions for the social, political, economic and spiritual wellbeing of humanity.” 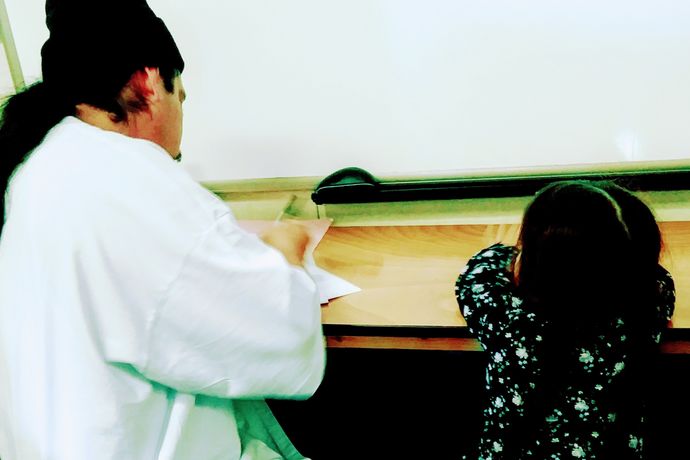 As the very first voter guide designed to educate and heal voters in Native California, Sacred Vote created a ground-breaking advocacy tool for Native civic leadership movement building engaging a generation of system-impacted fathers who are traditionally absent at the polls. A three year old daughter witnesses her formerly incarcerated father build power at the polls during a historical election. A sacred vote to restore Native land and people. #NativeVote18 #SacredVote

‘Honoring the Sacred’ in Native California

With Natives being killed by police at a higher rate than any other ethnic group in the nation, according to a 2016 report, Frizzell said she finds it unacceptable that Native people and data most proximate to the problem are often missing or limited in education and criminal justice reform. Sacred Generations is changing this injustice while also connecting mass incarceration to educational inequity and climate injustice, she said. “System-impacted tribal communities have an unquestionably unique proximity to pain and power to lead racial justice movement building on our stolen land.”

Sacred Generations was eager to publish a statewide mobile-friendly voter guide designed to educate and heal Native California asking every candidate on the ballot to publicly share their knowledge and solidarity with sovereign tribal communities. In two weeks, Frizzell said, #SacredVote attracted more than 1,000 voters and more than half reported to be first time voters. In addition, one hundred percent of voters said they were more knowledgeable about Native voting rights, prepared to make an informed vote and empowered in the voting process. More than 100 local, statewide, federal and judicial candidates were reported to have participated in this questionnaire. Frizzell said, “Data tells us a story. Storytelling is a tradition in our culture. Our data tells us voters heavily represented the Yurok, Hupa, Maidu, Miwok, Yokuts, Pomo, Ohlone, Chumash, Tataviam, and Cahuilla territories.”

“Because of this innovative work, moving forward, candidates running for public office - in the state with the largest Native population in the nation - will have the opportunity and responsibility to publicly share their solidarity with Native peoples on our stolen land,” Frizzell said. “That's historical movement building. Native students now live in a world where they know how elected representatives stand with Native movements - and they have an advocacy tool to hold them accountable, if and when they're elected.” Witnessing an immediate impact, Frizzell expressed her excitement to see the long-term impact of their voter guide as a movement-building tool in the years ahead. Preparing to announce more groundbreaking work in the months ahead, Sacred Generations was proud to be part of a historical election for Native communities with a deep commitment to continue creating innovative voter education resources to build a sovereign civic leadership legacy.

Next generation leaders like Deputron were able to see Native women make history this year - Sharice Davids and Deb Haaland - became the first Native women elected to Congress. The State of California also celebrated the first Native from a California tribal nation elected to the State Assembly, James Ramos, former chairman of the San Manuel Band of Mission Indians. Tribal leader Chief Caleen Sisk of the Winnemem Wintu Tribe also ran for State Assembly in her homeland and won the primary when it was said that she “never had a shot” in one of the most conservative regions of the state.

For more information about Sacred Generations, please visit www.sacredgeneration.org and follow them using social media handle @uhonorthesacred or hashtags #HonorTheSacred #SacredVote #SacredSisters – and support their movement in the new year at sacredvote.causevox.com.

Proud to be a guest editor featured by Teach For America, Terria Smith (Torres Martinez Desert Cahuilla), is the California Indian Publishing Director for the Heyday Berkeley Roundhouse Program and Editor for News from Native California.

Photo at top of page: Community advocates surrounded Alyzea Deputron (Apache) outside of City Hall with gratitude after witnessing her speech at Stockton City Council challenging Mayor Tubbs for hosting a tour with Banks financing Indigenous rights violations and proposed four new policy resolutions. Teach For America Capital Central Valley proudly shared her youth advocacy to the incoming corp as an example of student leadership. In addition, Deputron and her mother were honored for their intergenerational system-impacted leadership in Stockton.