This award-winning teacher is determined to keep great talent in New England. He came up with an approach that could work anywhere. 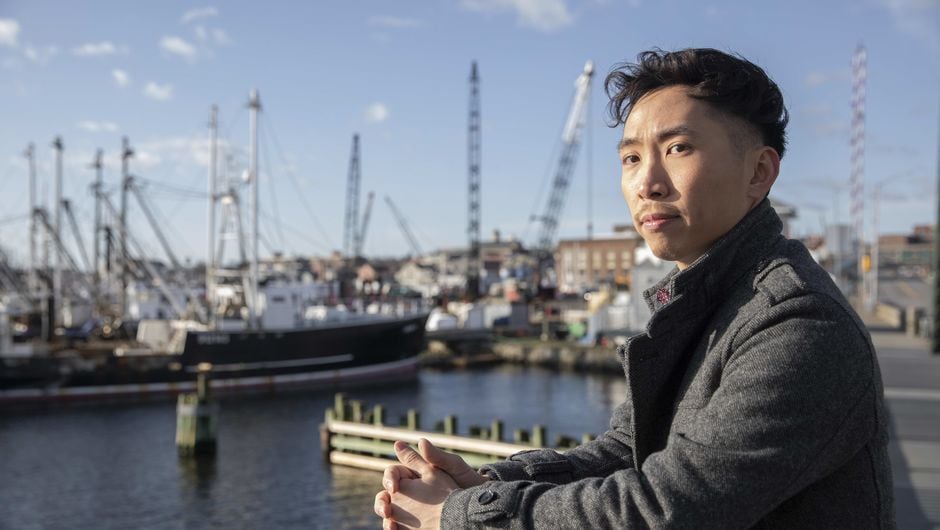 As a state teacher of the year, Nagayoshi (here in historic New Bedford) has joined task forces and commissions where he’s heard many perspectives on how to achieve holistic, systemic change in education. He says all these groups “crave teacher input.”

The signature initiative for which Takeru Nagayoshi (Massachusetts ’14) won the Sue Lehmann Excellence in Teacher Leadership Award from Teach For America is one that could be a model for small or rural districts far outside of resource-rich metropolises.

Nagayoshi has developed a special love for the southeastern Massachusetts coastal town of New Bedford, where he’s been teaching English since his corps placement. It’s a former whaling town with a rich history (a center for Civil War-era abolitionists, this was Frederick Douglass’s first home as a free man).

Like a lot of small cities that are known for dead industries, New Bedford is economically depressed. But in Nagayoshi’s opinion, it’s also feisty. As he sat on the edge of a desk in his classroom, dressed in a blue blazer, tan T-shirt, and pink pants, he said of his students, “Many of them come from difficult situations, but they’re loving and so talented. They rise above their challenges. They’re really funny, too. They’re direct and sassy in their humor. They say it like it is. I’m from New Jersey, so I can kind of relate.”

The thing that’s bothered Nagayoshi the most about New Bedford is that he’s seen some of its most ambitious teachers leave for places like Boston and nearby Providence, Rhode Island. He concluded that one reason is a lack of options in smaller cities for teachers who seek stimulating fellowships or development opportunities (like the ones he’s enjoyed through the nonprofit Teach Plus and the Education Redesign Lab at the Harvard Graduate School of Education).

So Nagayoshi—who has multiple teaching and social justice projects in the works at all times—started a fellowship for ambitious teachers. He drew on partnerships with the regional staffs of Teach For America Rhode Island and Massachusetts and with Leadership for Educational Equity to launch a two-year effort to teach corps members and alumni teachers in the southern New England area the skills to organize and influence policy. Those skills, he says, are essential because “teachers are the most qualified to speak out on educational matters and lead change for educational equity.”

The fellowship (called Southern New England Alumni Leadership Institute) is now in its second year. Participating teachers are working on capstone projects to each lead a policy change in their school or community.

One of those fellows is Callie Miller (Massachusetts ’15), who teaches English (freshman and sophomore) to some of the 2,000 students at New Bedford High School. She’s working to bring some meaning to the school’s mandatory student advisory classes, in which homeroom teachers meet in group advisory sessions once a week with their students. Miller says the state required the school to establish the advisories to improve relationships as part of its turnaround strategy for the New Bedford district.

But given competing demands on their time, Miller says, many teachers strain to plan effectively for advisory classes. “The worst is that from the student’s point of view, there’s zero rationale, so it feels like just another hoop to jump through,” Miller says. This year, she’s building out a hub of lesson plans and resources from teachers who lead the strongest advisories. She’s working to have the school adopt an advisory curriculum.

“I’m using this fellowship to try to make a small change in my school but also to build connections, because I plan to be here for a while,” Miller says. “The best part of the fellowship has been to have other intelligent people who have the same convictions to bounce ideas off of.”

Nagayoshi experienced many kinds of K-12 schools as a student. As his family moved around, he attended urban and suburban schools in New York and New Jersey. He also had the experience of being the kid who didn’t understand the dominant language when he went to school in Japan.

He’s on the move again this year, traveling the state as the Massachusetts Teacher of the Year, missing more days at school than he’d like. Last year, Nagayoshi taught AP English Literature and AP Seminar, which prepares students to do rigorous college-level research related to world problems. Students focused on topics that felt relevant to their own lives. A junior ROTC student researched how the military handles claims of sexual harassment. In the 2016-17 school year, Nagayoshi piloted the research-based AP Capstone program in his district

“I’m using this fellowship to try to make a small change in my school but also to build connections, because I plan to be here for a while.”

More than 92% of New Bedford High’s students passed the AP Seminar course, with the district leading the state with the highest number of AP certificates awarded. That went a long way toward lessening the stigma students sometimes feel in attending a turnaround district.

In His Own Words

Nagayoshi (@tk_nagayoshi) also publishes opinion pieces that comment on education issues, including those of identity and social justice. He’s written about what it’s been like to come out as a queer teacher in The Advocate. For The Nation, he argued for school districts to embrace transgender and gender-nonconforming students. For the student newspaper at his alma mater, Brown University, he wrote a piece on the urgency for people of color to enter teaching.

It’s a constant theme in his classroom. As part of his application for the Sue Lehmann Award, he explained why:

“Like most Americans, I consider myself to be a bundled mess of different, contradictory identities. I have both privilege but also don’t have privilege in some areas. I find myself sometimes in the category of the oppressed and sometimes the oppressor. For example, being East Asian, I’m seen as this perpetual foreigner. A lot of students are surprised I actually speak and teach English.

“But at the same time I am a benefactor of light-skinned privilege, so I don’t have certain fears entering different spaces and being treated differently as a result of that. My parents are linguistic minorities, they don’t speak English fluently, so I’ve seen them be judged. … But at the same time, they’re college educated, they’re high-skilled workers, and they were able to secure me with citizenship to thrive in this country.

“I’m queer, but I’m also cisgendered, male, and able-bodied, so I have advantages there. …So for me, privilege and identity is about how you constantly stand at the crossroads of being marginalized, being oppressed, having power, not having power, and therefore how do we leverage that understanding to fight for justice?

“I do this in the classroom through content and curriculum work where themes of power and privilege are always present. … I have units, for instance, that are designed around educational inequity. I’m trying to teach kids to explore their own selves in relation to the broader society they’re a part of. I definitely believe that rigor is something that can’t be achieved outside of this context of diversity, equity, and inclusivity. If we’re wanting to have our kids impact change, that’s the lens that needs to be adopted.”