For College Students, an Introduction to the Corps

What if instead of interviewing to join the teaching corps, you could prove yourself by doing on-the-ground work? 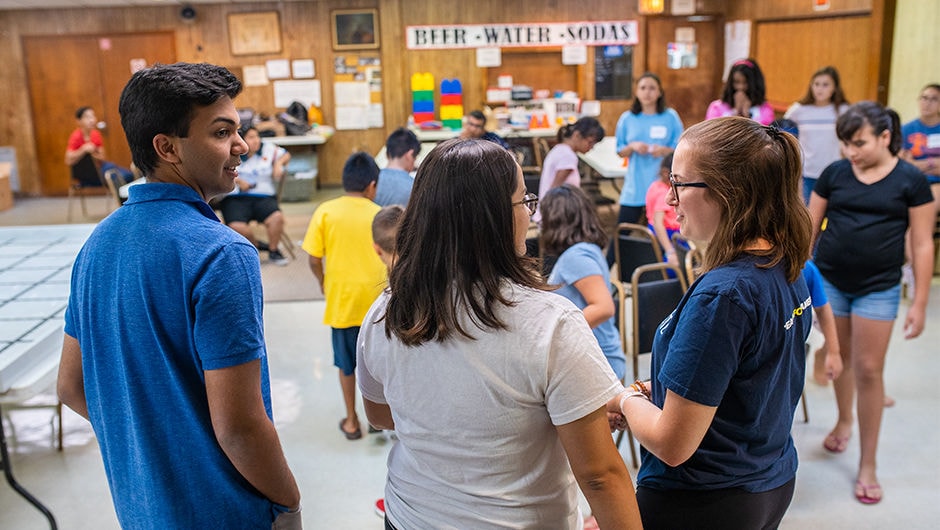 By Susan Brenna and Kevin Martinez

Above: While working at a summer camp in Texas, Accelerate fellows (left to right) Vineet Desai, Christy Lopez, and Jess Heckler wrote a guidebook for teachers of students with diabetes. Photograph by Kevin Martinez

This past summer, Teach For America selected 31 Accelerate fellows and put them through a week of leadership training and an orientation to community-led educational equity efforts. Then the fellows headed out to work at organizations (some led by alumni) that support the education ecosystem and partner with Teach For America regional teams in Chicago and Rio Grande Valley.

Those who successfully completed their training, their work with partner organizations, and their capstone projects were admitted to the corps without going through the regular application process.

Among this past summer’s fellows were Christy Lopez, a Johns Hopkins University public health major; Jess Heckler, who’s studying secondary math at Penn State; Vineet Desai, a Vanderbilt University biology major; and Brendan Coffey, a journalism major at Virginia Tech. The four worked as a team for three weeks at science-oriented summer camps for pre-K through middle school kids with diabetes in and around McAllen, Texas.

They did some typical counselor work at the camps, where kids (some wearing Continuous Glucose Monitor patches) did typical summer camp things like splashing around in the pool.

But the central reason the fellows were there was to complete a couple of key projects the staff members lacked the capacity to execute. They recorded video interviews with campers, who described what it’s like to be left out of school activities because the nurse isn’t there, and their teachers feel unprepared to manage their health needs. They also worked on a project designed to equip more teachers with the knowledge they need to feel confident in making every learning activity open to kids with diabetes.

The South Texas Juvenile Diabetes Association, which runs the camps, offers teachers a short certification course in managing the needs of students with diabetes. But only so many teachers have the access and time to take the course. What the four Accelerate Fellows did was to take the certification course themselves. Then they built out a teacher guidebook and a website to pass those same lessons to any teacher with a web browser.

Debra Franco, the co-founder and executive director of the South Texas Juvenile Diabetes Association, called the work of the fellows “priceless,” explaining that “one of the things we really lack most as an organization that works with children with diabetes is educational material” like the new website and guidebook.

As for the fellows, they appreciated the opportunity to have an immediate impact in a community that was new to each of them, while getting a taste of the kind of leadership that would be expected of them in the corps.

“I was thinking about teaching in the corps because I really want to teach in a high-need area when I graduate,” Jess Heckler, the Penn State senior, said. “So I thought, what better way to get to know the organization than to actually be there this summer?” Heckler particularly appreciated that the fellowship was “financially inclusive,” adding, “This is something that I probably couldn’t have pulled off if I didn’t have my flight paid for and things like that.”

Vineet Desai, the Vanderbilt senior, appreciated the connections he made with other fellows during orientation and was surprised how varied their interests were. “Coming here I thought so many people would be only interested in education, and it’s the opposite,” he says. The fellowship “gives you the connections to people to make an impact in whatever career you want to go into.”

Apply Early to the Corps

Learn more about how you can join the Teach For America network.

Interested in having a future corps member work with your organization next summer?

Alumni who are interested in having Accelerate Fellows work with them should send a note of interest to Mark Munro. There is no cost to alumni-led organizations.

Falling in Love with Miami

3 Big Reasons Why Professionals Should Consider Teach For America

6 Questions About Your Placement and Getting Hired