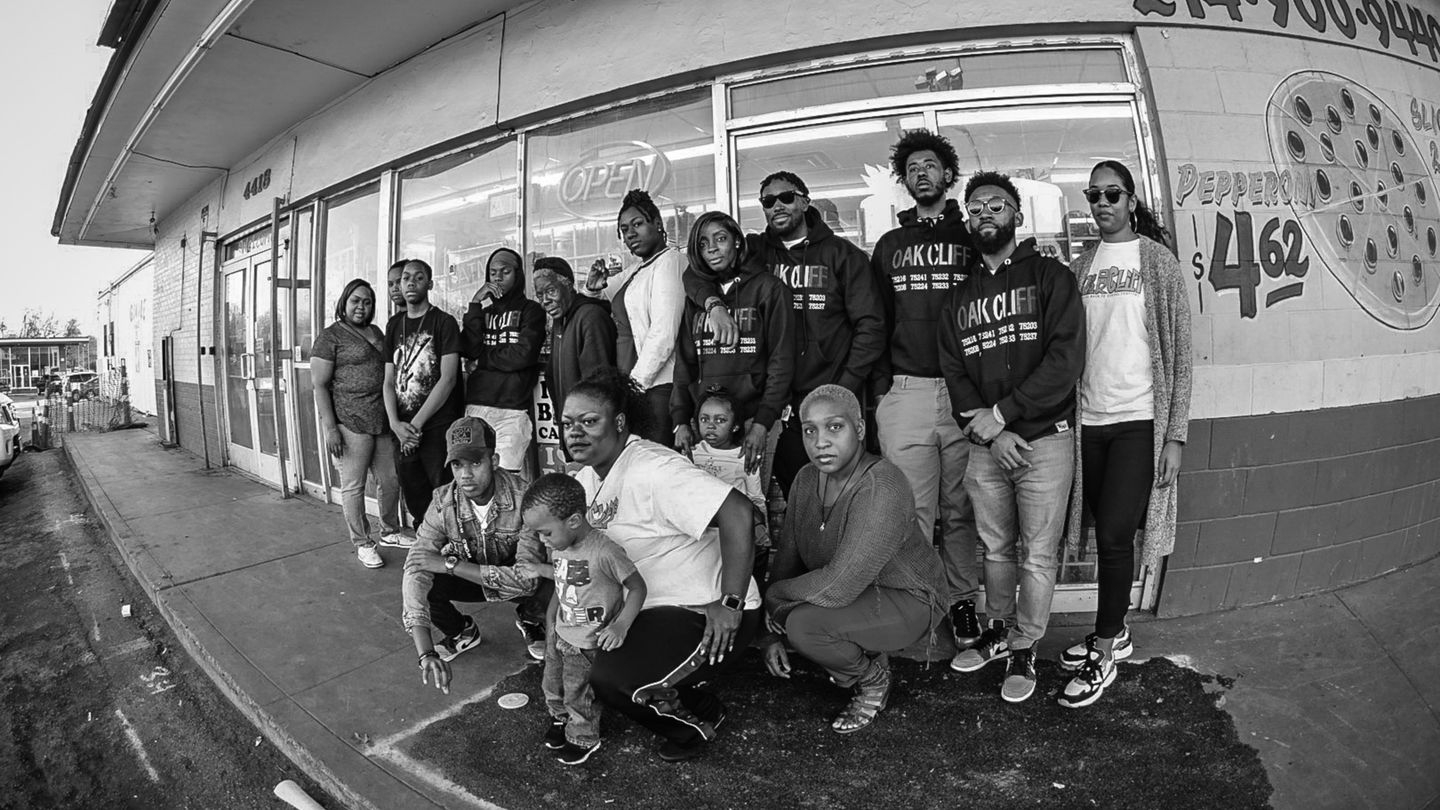 Facing Oppression through Pain, with Resilience

Despite decades of disinvestment, For Oak Cliff sees promise in its namesake Dallas neighborhood. Activists are treating both the causes and symptoms of oppression.

Elroy (EJ) Johnson (S. Louisiana ’12) collaborated with Taylor Toynes (above) to conceptualize and shoot the photos for this article. Their reference point for the black and white photo of South Oak Cliff activists gathered by the building that housed Toynes’ grandfather’s store was an album cover for which Kendrick Lamar gathered his family and home friends for a photo with a White House backdrop. Read more about Johnson and his photography below.

Oak Cliff is about an 80-square-mile section of Dallas that sits south of downtown and the Trinity River. An interstate highway divides it.

The northwest side is wealthier and whiter. A gourmet grocery store here just received a $350,000 low interest development loan from the city.

The southeast side of Oak Cliff  is how decades of institutional disinvestment looks. This is where Taylor Toynes (Dallas-Fort Worth ’14) leads a community-driven backbone organization called For Oak Cliff that aims “to liberate Oak Cliff from systemic oppression.” Toynes and other local leaders worked all of last year with the American Heart Association to try to open a nonprofit supermarket here. No go. Neighbors still have to buy their food at the dollar store.

This part of Oak Cliff contains one of the nation’s last intact Freedman’s Towns, where formerly enslaved people came to buy property after the Civil War. It’s where Toynes’s grandfather Elisha Benson owned a store and lunch counter in the same Glendale Shopping Center where For Oak Cliff now sits next to a Pan-African bookstore.

The shopping center, a longtime community convening place with its 1940s-era signage still intact, is lined with empty storefronts. But the landlord let For Oak Cliff kids paint murals, and the organization’s headquarters shine. Toynes, a 31-year-old, former fourth grade teacher with five-alarm-fire charisma, met some young leaders of the Dallas Real Estate Council and persuaded them to invest $400,000 in renovations.

The space includes classrooms where (mostly) women study for job certifications and GEDs, and where a community college sponsors writing clinics for college applicants. A revolving corps of high school and college interns work here on canvassing and advocacy efforts. Other classrooms house a free, literacy-based pre-K and after-school program. A volunteer doctor sees neighbors who lack health insurance. During evenings, the space fills with community meetings, including young adult Bible study. 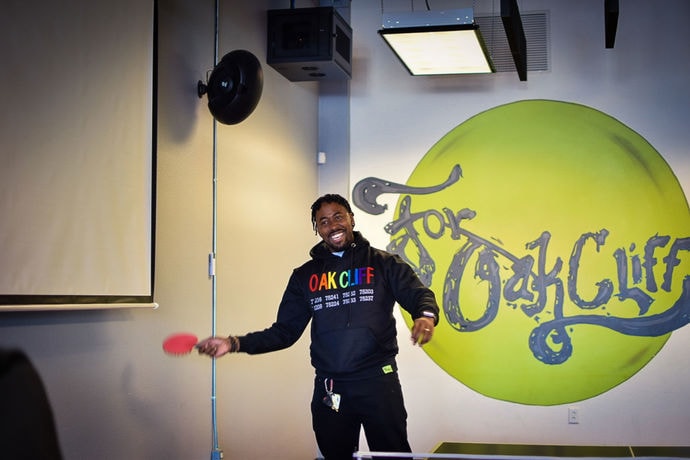 Toynes’s glass-enclosed conference room is in the front, where he can see out to the street. On a day last summer, Toynes walked in and was surprised to see the local Fox4 News anchor sitting at his conference table, filming. The newsman was interviewing the mother of a teen, Shavon Randle, who had been kidnapped and killed one year earlier. All through the family’s grieving and the trial, Toynes had stood by Shavon’s mother. When Fox4 called to request an anniversary interview, she agreed to meet only  at For Oak Cliff headquarters.

Last spring, Toynes won one of TFA’s three 2019 Social Innovation Awards for leading a long list of efforts that include community gardening; helping to persuade the City of Dallas to give students free admission to city-owned rec centers; and piloting dual-generation, school-based learning .

What’s remarkable is that For Oak Cliff accomplishes this and more with an army of volunteers and just three fulltime staff members. Those include Toynes and co-founder Xavier Henderson (Dallas-Fort Worth ’15), who traveled to San Francisco with Toynes to pitch for and win the TFA award.

The judges of the Social Innovation Award took note of how far For Oak Cliff had come in four years on the relationships it’s built with students and families and its leaders’ deftness in negotiating power.

Examples of the latter: Xavier Henderson, who wants to see libraries become youth multi-media centers with open mic nights, got himself appointed to the regional library board. Toynes worked with the community to persuade Dallas to invest in redeveloping the neighborhood’s 63-acre Glendale Park. He also became the vice chair of the Dallas parks board administration and finance committee. The city approved funding of the first phase of the park master plan, and now Glendale Park will get restrooms in 2021.

And while the community has yet to land a supermarket, Toynes did meet a philanthropist and former mayoral candidate, Lynn McBee, in the course of pursuing one. She’s since joined the For Oak Cliff board.

As masterful as he is at pulling in grants from every direction, Toynes says he’s still grappling with how to build a sustainable financial model to keep the center afloat and meet his community’s expectations. That’s part of what he’s using the award money to do: build a stronger operating infrastructure and network of advisors.

It’s hard when crises never cease. Toynes’s frustration comes through occasionally on social media. “My zip code 75216 leads the state of Texas with the most inmates,” he posted to Instagram. “It’s time to stop playing and glorifying the oppression we experience and really get to work. What are you going to do?”

On the last Sunday in January, Toynes published an op-ed in The Dallas Morning News challenging readers to become “more proximate” to his part of town, where public policies have led to “extreme poverty, leading to extreme desperation.” He wrote, “For me and others who’ve grown up in South Oak Cliff, proximity to social ills such as murder, mass incarceration, drug addiction, poverty, inadequate learning facilities and police brutality has become our reality.”

As both a leader and a member of the community he’s volunteered to lead, Toynes feels the crushing weight of losing to gun violence former students and young men that he and fellow leaders have mentored.

For Oak Cliff’s biggest yearly event is its Back-to-School Festival. In August, 6,200 people came out to the combination music festival, job and college fair, voter registration drive and giant block party. But three days earlier, volunteers at For Oak Cliff headquarters were stuffing 3,500 backpacks with donated school supplies to be distributed at the fair when they received terrible news.

The son of a Dallas Independent School Board trustee had been shot and killed on an Oak Cliff street. This would be followed, as winter arrived, by more gun violence including two back-to-back killings of young men.

During the first weekend of winter break, Toynes attended the funeral of a 15-year-old whom he’d known for years from a school where he’d worked as a corps member. Then in January, Toynes spoke at the candlelight vigil for an 18-year-old who had been his student. He had been shot to death at a high school basketball game in the community.

Hundreds of people came to that vigil, Toynes said. “As I’m looking out, panning the crowd, I’m seeing my students who are now 16, 17 years old, young men who have experienced their friends dying. I frankly don’t have the answers. I told them, ‘I believe in you. In everything you do, practice knowledge, wisdom and understanding.’

“Afterwards, one of the young men sent me a message and asked if there was room in the mentoring group I work with. He knows that he wants something different.”

“A lot has happened this year,” Toynes reflected. “I feel challenged. I’ve been hurt. I’ve been excited. I’ve been feeling any adjective you can describe, other than defeated.”

In that spirit, he asked to end on this note: Just weeks ago, students showed up at a newly constructed, state-of-the-art South Oak Cliff High School. Their older brothers and sisters had led a walk-out when they were in high school to advocate for replacing their decrepit school building.

“That school shows the resilience of our community and our students,” Toynes said. “It is hope for the next generation.” 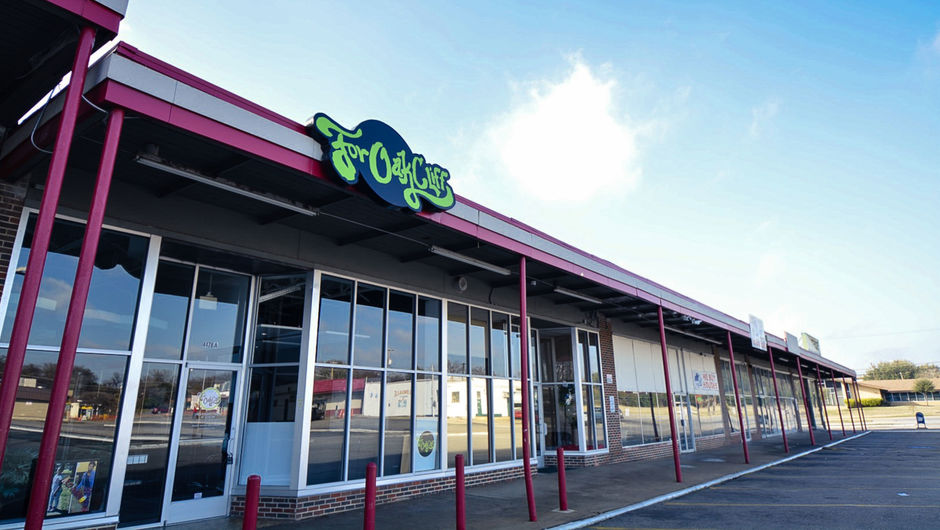 The Photographer of South Oak Cliff

Johnson believes he probably first met Toynes through the Dallas TFA alumni network. But the two would have met anyway, because Johnson is always out and around Oak Cliff with his camera. He shoots birthday parties, church anniversaries, high school bands, and whatever else strikes him as Oak Cliff’s authentic, family-oriented life.

“I see an over-representation in the media of negative stories from Oak Cliff,” Johnson says. “I’ve had different experiences of humanity in this place that I really love, where I wanted to live since I was a kid.”

Johnson grew up mostly in Oklahoma. But he spent summers in Oak Cliff with both sets of grandparents (his mother’s side migrated from rural Louisiana, his father’s from rural South Texas). Hearing his grandparents talk about their school days put him on a path to teach.

His maternal grandparents, who helped support the family by picking cotton, had to stop school in 8th grade. “I was talking to my (paternal) grandmother quite recently,” Johnson says. She “knew how far they had to travel just to get to a school for Black children. They knew they were getting hand-me-down textbooks from the white schools.”

His grandmother is a main subject of “The Ladies of Oak Cliff,” a documentary Johnson filmed with fellow alum Xavier Henderson. They recently screened it at the Capital City Black Film Festival in Austin, Texas. In it, Johnson’s grandmother describes how it was to be one of the first  Black families to buy a home on her block in the 1960s, with white families fleeing within two years.

The Dallas Office of Cultural Affairs commissioned Johnson to produce a short doc on the lack of STEM learning opportunities in Oak Cliff. Johnson says, “We’re documenting what community members ARE doing so we can expose students to more opportunities.”

Examining Learning Through an Anti-Racist Lens