Being A Principal, There Is More Power For Change 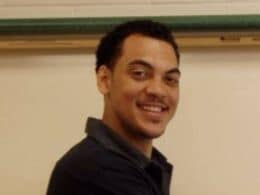 Caine Lowery planned to be a college professor. He envisioned higher education as a way to help other African American students access power and control over their lives.

But his mentor at Portland State’s black student union pushed back. “He said, ‘Have you ever thought about being a middle school teacher or high school teacher? If you think about it, that is when most African American students fall off.’ I thought about that for a long time and decided he was right.”

Lowery completed his bachelor’s degree in black studies, and changed his trajectory. He earned a master’s degree in secondary social studies from Lewis & Clark University and joined Teach For America in 2006. He was motivated to work alongside other young leaders in the social justice movement — and prove he could succeed at teaching any student, in any community, where TFA decided he was needed most.

It’s been a decade now since Lowery was assigned to Metro Atlanta, Georgia. He taught for two years at a high-poverty public school in the S.W.A.T.S. and is continuing his career back home in the Northwest. Today Lowery is the dean of students at Seattle’s Cleveland High School and one of six TFA alumni in the Danforth Educational Leadership Program at the University of Washington.

“Looking back at my time in Atlanta, the work was really, really hard. But I loved my kids, I loved my school, and every bit of the TFA experience was something that meant so much to me. It just informed who I am as a person, what I believe, what my values are, and what I’ve committed my life to doing.”

Despite this esteem for education, Lowery wasn’t a model pupil. He loved going to school and reading as a very young child, but as time went on he remembers failing classes and acting out. He and his twin brother were raised by their mother after their father died in a federal prison. The family didn’t always have a reliable car to get to school, and an eviction disrupted learning opportunities.

Lowery had a turning point his senior year. A high school counselor determined Lowery would need to attend a fifth year to make up for lost credits, and the pronouncement left his mother in tears. He spoke to his counselor and together they developed a plan to go double time.  Lowery passed a full roster of classes during the day, plus made up all the missed courses in night school.

He graduated on time and was accepted at Portland State conditionally due to his unconventional transcript. But finally able to study his passion, his relationship to scholarship transformed. “I started to realize education was something no one could take away from you, and you could use it to change your situation or use it as power to protect yourself,” he said.

Arriving at Teach For America in Metro Atlanta was a culture shock, but in a good way. His cohort became his family, and he saw his reflection in his students. After two years, he returned to the Northwest to be closer to family, and finally settling in Seattle.  This is his first year as the dean of students at Cleveland High, part of Seattle Public Schools, and he is innovating the role.

Lowery said he is a part of a “committed and thoughtful administrative team” who is focused on ending racial gaps in educational achievement. Part of the equation is curbing disciplinary actions that disproportionately push African American and Hispanic students out of school.

The team is trying to confront the disproportionality in suspensions and expulsions with restorative justice. When teachers or students are faced with a breakdown in relationships that can result in disciplinary consequences, they try working through the conflict with a restorative justice circle protocol—a kind of mediation—with Lowery and the affected students and staff.

“We focus not on who is wrong, but what is causing the harm,” he said. “We talk about how to repair student-teacher or student-student relationships, rather than just dole out punishments.”

This fed Lowery’s interest in the Danforth leadership program and working in education beyond.

“In every school I’ve worked in, I’ve encountered really strong teachers. But their impact is limited to their classrooms, not school wide. Who suffers in that scenario? Kids of color, poor kids. Being a dean or principal, I will have a broader impact to support teachers and staff for change.”

Fueling the Movement in Austin

How One Principal Is Building Student and Teacher Confidence

5 Essential Tools for Leading as a Person of Color