A fearless group of New York City teens has taken their demands for educational justice straight to the top. And the top is listening.

In a little over a year, New York City-based Teens Take Charge has grown from an upstart, unknown coalition of high school students to a respected and media-savvy advocacy group with a direct line of communication to the chancellor of the largest school system in the nation.

The students’ goal is to change the enrollment policies that govern the 1.1 million students who attend New York City schools, and to desegregate one of the most segregated districts in the country.

Ambitious? Sure. But their confidence level is exactly what you’d expect from students who’ve already earned a seat at the table with some of the most influential school policymakers in New York.

The New York Times covered the group’s public launch event in the Bronx last March, a sharing of poetry, spoken word, and open letters about students’ daily experiences in schools. But Dulce Marquez and Coco Rhum—two of the group’s student leaders—recognize May 17, the anniversary of the Brown v. Board of Education decision, as the real breakthrough.

On that day, 27 education policymakers, including 6 elected officials, spent a half day each hearing from student leaders in high schools across the city. Then they gathered at a policy lunch where the teens shared stories of how they’d experienced unequal access to excellent schools. Some 40 policymakers and influencers signed pledges to share the students’ enrollment equity proposals or hold focus groups with high school students in their districts before the end of 2018.

Two weeks later, Mayor Bill de Blasio announced his support for a proposal to change the admissions criteria for New York’s eight specialized (and extremely selective) high schools from a single test to a broader set of measures. It’s a highly contentious proposal that has pitted against each other New Yorkers who otherwise share common ground on issues like fair school funding. And only state (not city) leaders can change the policy. But the intention of policy-change advocates is clear: to admit a more representative group of city students to the selective schools.

Lazar Treschan, director of youth policy for the Community Service Society, a New York-based think tank, first proposed that change as the author of a 2015 report on the topic. Many factors no doubt contributed to the timing of the mayor’s proposal. But the policy had been batted around between city leaders for more than two years, and “it wasn’t until [Teens Take Charge] came around that the mayor proposed it,” Treschan says. “No one was really willing to go for it till these guys got in their faces about it.”

Beacon High School senior Coco Rhum is a member of the Teens Take Charge policy team. When Richard Carranza, the new chancellor of New York City schools, voiced strong support for prioritizing school desegregation, Rhum felt she and her peers could claim a small piece of credit. “We’re making a ruckus and forcing people to confront what’s happening in schools,” she says. 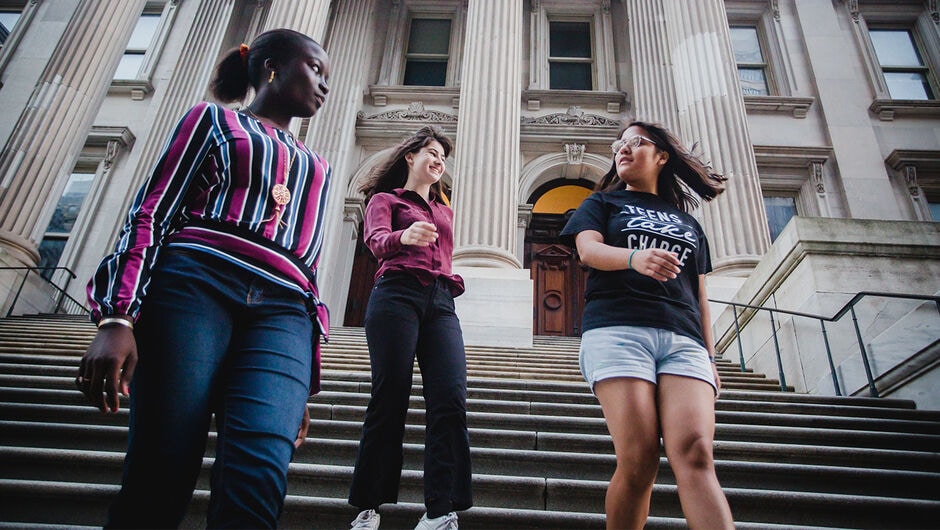 Teens want to create change, but they don’t always have the opportunities, says Dulce Marquez (right), at New York City’s Department of Education with Sokhnadiarra Ndiaye (left) and Coco Rhum. “We want to expand those opportunities,” Marquez says. Saskia Kahn

The group was started in 2017 by journalists-turned-teachers Taylor McGraw (N.Y. ’12) and Adrian Uribarri (Chi–NWI ’10). Both men had reported on education before becoming teachers. They connected over their belief that in order to solve the problems facing schools, students’ stories and ideas need to be heard.

Their initial project was a media platform called The Bell featuring a student-centered podcast about school segregation. But the students involved in the podcast didn’t just want to talk about problems in the schools; they wanted to do something about them. The students decided to form Teens Take Charge, which McGraw and Uribarri merged with the podcast (now named Miseducation) under The Bell’s umbrella.

The idea is to develop student leaders on the job, not in isolation from real change. “Our goal isn’t for them to be change agents four years from now,” McGraw says. “There’s no reason students shouldn’t be at the table right now.”

Over the past year, these students have found seats at influential tables, where their impact has been undeniable. What were the steps that got them there?

Dulce Marquez and Sabrina DuQuesnay, both 17, have been two of the group’s most active members since its founding. Growing up, they were aware that the schools they attended were often short on textbooks and supplies. They also noticed how few white kids went to those schools. But it wasn’t until they heard McGraw break down the data on New York school segregation during a weekly program at Seizing Every Opportunity, a college prep program, that they made the decision to devote hours each week to becoming activists.

On a muggy, late-summer Saturday, the young women led me up the steep steps of the imposing headquarters of the New York City Department of Education. Marquez, now a freshman at New York University, has a calm, confident air and sparkling brown eyes behind large-framed glasses. DuQuesnay, a freshman at Stony Brook University, has a toothy smile and an energy to take on the world. As we stood outside beneath a row of towering columns, they shared thoughts about how teens should take power in their own school districts. 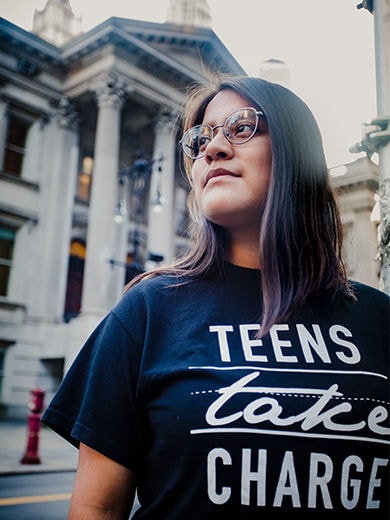 The teen group’s founding members shared a general sense of frustration with the state of schools. But coming from varied neighborhoods and backgrounds, they needed time to talk through each other’s advantages and disadvantages within the school system. Only because they’d taken time to understand each other, Marquez and DuQuesnay say, were they able to agree on a mission.

The first is the one that would change how students are admitted to the most selective high schools.

The second is to increase transparency in the high school directory, the 500-page catalog each eighth grader receives to help choose where, among the city’s 450 open-choice high schools, to apply. Some students felt they’d been duped by promises of defunct classes and incomplete school scorecards. They’re arguing for the catalog to be changed to show the percentage of students at each school who graduate prepared for college and each school’s average SAT scores.

The third is to increase academic diversity at all high schools. Students found in their research that city students cluster not just by race and class but also by academic achievement. They’re arguing to break up concentrations of struggling students. 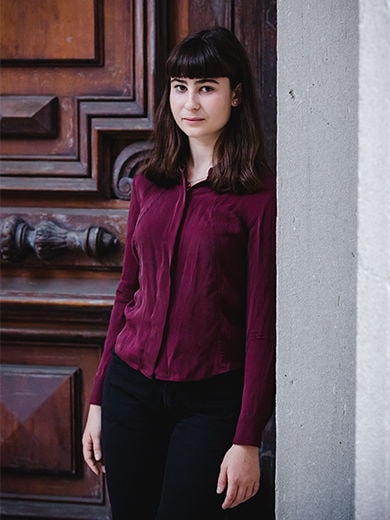 Aim your advocacy at decision-makers.

Ramirez later arranged for meetings to happen between Teens Take Charge and school district representatives, giving students a direct line to the central office. Students drove those meetings, which led to the establishment of a youth-adult working group charged with making recommendations for improving student voice opportunities across the school system. This past June, they brought their proposals to an in-person meeting with Chancellor Carranza.

At Teens Take Charge’s meetings and events, Treschan says, their authenticity and the truth in their lived experiences make the students almost impossible to ignore. “There is nothing more real than the voices they present,” he says.

Broaden your circle of collaborators and focus on strong communication.

This is essential and harder than it looks, says Marquez, who serves as Teens Take Charge’s communications director. For example, New York City has a long-standing channel to elevate student voices called Borough Student Advisory Councils, or BSACs. Marquez believes few students know about these, and many schools have no representatives.

Teens Take Charge wanted to advocate without bulldozing the BSACs. They invited the BSACs to join them and jointly survey students on how to improve the system. The results of the survey guided the proposals Marquez and her peers, including BSAC representatives, ultimately presented to Carranza.

As a matter of strategy, former teachers McGraw and Uribarri barely speak at Teens Take Charge events. But they work actively behind the scenes to make sure students get heard. Over the course of the 2017-18 school year, McGraw, who is the group’s only paid staff member, and Uribarri, a communications consultant who does the work pro bono, helped students plan and prepare for many high-profile and high-stakes community and policy events. “When it comes to figuring out what they’ll say when they get to the table, we support them there,” McGraw says. Like great English teachers, they help the teens craft their most compelling and persuasive narratives. Then, they help bring out influential leaders and members of the press. 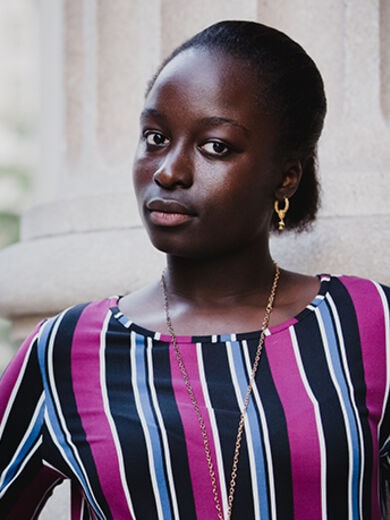 In August, the group met for a daylong retreat in a cramped conference room at New York University. Marquez led a session on how to craft professional emails for students stepping up to be fundraisers and event planners. Uribarri talked about organizing and connecting through Google calendars. DuQuesnay led an energizing presentation on Martin Luther King Jr.’s Six Steps of Nonviolent Social Change.

One of the group’s newest members is Brooklyn College Academy junior Sokhnadiarra Ndiaye. She said that before the retreat, she wasn’t sure activism would fit with her busy school schedule in the fall. But at the close of the meeting, Ndiaye shared a revelation: “School was about to be the reason I can’t fight problems in school,” she said. “I’m not going to look to see if I have time; I’m going to make time.”

Not long after, Ndiaye worked a Teens Take Charge event in Washington Square Park. Marquez believes the coalition is in good hand with students like Ndiaye coming up. “She was very good at sitting down with strangers and talking to them about our issues,” Marquez says.

McGraw has advice for other educators working to support student advocates. “Shoot high, aim high. Don’t think that just because it’s a few students, or a new thing, that it will take you a long time to have an impact.

“If you have students with stories to tell, that’s enough,” he says. “The people in power should be ready to listen.”