After the Floods Receded, Houston Educators and Students Rose Up

From organizing kid zones at shelters to salvaging students’ college applications, meet some of the people who stepped up in the face of catastrophe.

When Hurricane Harvey struck Houston in late August, the city of Houston struck back. The storm’s terrible magnitude—at least 70 people died, more than 30,000 were displaced—was matched only by Houstonians’ collective effort to bring relief to their neighbors and get their city up and running again. Perhaps it’s no surprise that educators and students helped lead the charge.

Take Staci Childs (Houston ’13), a third-year student at the Thurgood Marshall School of Law and president of its student government. The floods wrecked her car, but she worried more for her first-year classmates struggling to pay the up-front costs of school amid the flood’s wreckage. So she created a network for law school alumni to support her affected classmates financially.

Or Orlando Valdez, a senior at YES Prep Southeast who “didn’t feel right” sitting in his dry home to ride out the storm. So he went to the local mall-turned-donation center to volunteer. By the end of the day, the dynamic young man was leading a 500-person volunteer squad that spent two days distributing clothes, food and water. Valdez earned the attention of Houston’s police chief and the fire marshal, who promised to write him a college recommendation.

Teachers set up Amazon wish lists and GoFundMe pages to re-stock their classrooms. They unloaded truckloads of donated supplies that arrived in convoys from around the nation. One example: Prince George’s County Public Schools in Maryland sent backpacks and set a goal of raising $132,000 (a dollar for every student in the county) for Houston schools.

Within days of the first cloud break, district and network schools in Houston pulled off the massive logistical task of amassing volunteers to clean, refurnish and re-stock schools and find their students wherever they had scattered.

At YES Prep’s network of 18 schools, attendance hit 94 percent on September 7, students’ first day back after the storm. Despite hundreds of students, families and staff members getting displaced from their homes, all 28 KIPP schools opened the same day, with teachers, counselors and operations leaders flying in from KIPP regions as distant as D.C. and Massachusetts.

By September 12, just 12 of Houston Independent School District’s 284 schools remained closed, with plans to have all students in a classroom by September 25.

Still, tremendous work remains, both in Houston and outside its spotlight in smaller towns like Rockport and Winnie, which lack the philanthropic and corporate-endowed resilience of the nation’s fourth-largest city. “I have big concerns about those students being forgotten and being out of school for a long time,” says Colleen Dippel (Houston ’96), founder and executive director of Houston-based Families Empowered. After Harvey, Dippel and her team turned their efforts from helping families with school searches, to providing 50,000 families in their network with resources and information to survive the aftermath.

Farther away in Florida, shortly after Hurricane Irma hit, alums like Rebecca Fishman Lipsey (N.Y. ’04) were rushing to put things right for kids and families. Lipsey leads Radical Partners, a Miami-based social-impact accelerator. As Irma tore through the state, Lipsey and her team quickly turned their efforts to communicating and amplifying to their wide network the work of more than 20 community organizations assisting families in the storm’s aftermath.

As different as Florida is from Texas, so are the ways in which people did and will continue to step up for those in need. The educators and Teach For America alumni highlighted in these snapshots typify thousands of others like them, representing a fraction of the good that surfaced as the dirty waters finally gave way.

So you’re a first year corps member in Houston. Two days before the rains begin, you stand in your carefully prepared classroom and greet the parents of your incoming kindergarteners at Robinson Elementary School’s meet-the-teacher night.

A week later, your classroom is under two feet of water. The next time you see your colleagues, you’re at the funeral for a student’s mother who died in the flood. District officials assess your school as one of the most severely damaged in Houston. No one knows when it will reopen.

“Can anyone else, in a day and a half, set up a camp at a shelter with no resources, no budget, nothing? That’s what teachers do.”

Now what do you do? If you’re Alex Rabadan (Houston ’17), you start calling and texting your students’ parents up to three times a day to give them updates, in English and Spanish, on which schools are opening, where and when. With fellow corps members, you volunteer at a food bank, quickly learning to package up meals and issue supplies.

You join your school colleagues to pick up the blanket of debris deposited around your school by the storm, finding waterlogged dolls and a cabinet drawer. And you go wherever the superintendent sends you to train on teaching students post-calamity. Like corps members across the region, you follow the need—as you will continue to do as your five-year-olds try to make sense of what just happened. 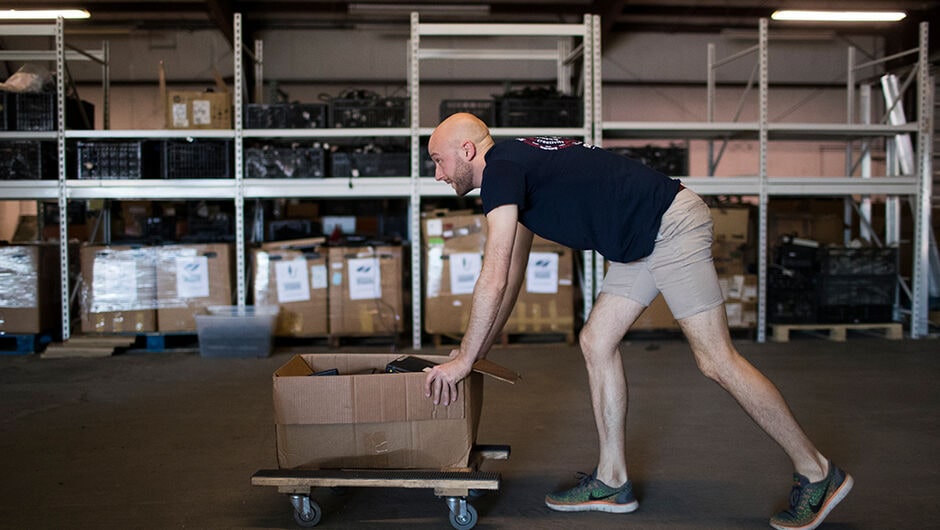 Colin Dempsey (Houston ’11) saw the shelter lines keep growing: for beds, clean clothes, food. There was one more need and he knew he could help fill it: internet access.

When it’s easy to get online, no one thinks twice about it. When it’s gone, everything depends on getting it back, says Dempsey, the education director at CompUDopt, a small Houston nonprofit that refurbishes donated computers for students who need them. 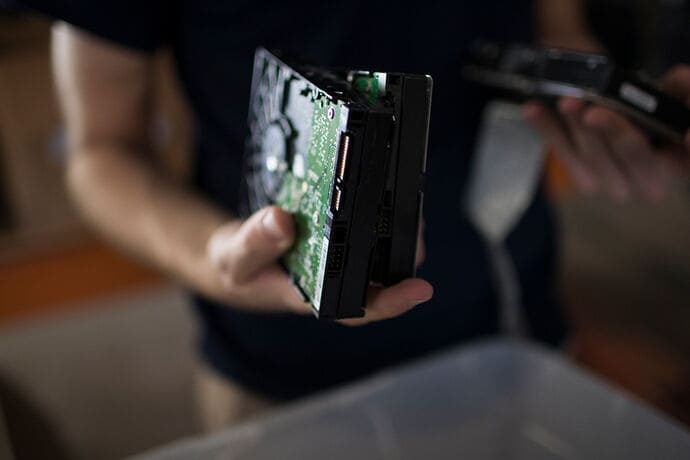 Within 24 hours of Harvey’s arrival, Dempsey (above) worked with CompUDopt’s executive director and dozens of volunteers to deliver more than 200 computer stations to Houston-area shelters. One of the first men to sign on posted a simple message to the world: “I’m safe.”

Dempsey’s team kept kids busy on shelter computers with games and free digital books, offering escape from their parents’ stress. Families logged on to apply for FEMA aid, to book hotel rooms, and to let the Houston Independent School District know where buses should pick up their children.

Last year, CompUDopt distributed about 1,500 computers to students in need. In the wake of Harvey, the goal is up to 2,500.

As Harvey drenched Houston, Simone Kern hunkered down with her husband and newborn daughter at her mother-in-law’s house, to which they had evacuated. On maternity leave from YES Prep Public Schools, where she directs literacy interventions, she posted a Facebook note: Would any teachers want to help out at shelters?

Within a couple of hours, 100 people joined the group Teachers Volunteering in Shelters. By day four, 1,500 educators had signed up, including alums Anthony DeLeon (Miami-Dade ’06), Lora Knapp (Houston ’07), and Elvira Marquez (Houston ’15).

A small team vetted each member against a public record database to ensure each volunteer had an active teaching certification. From there, “it’s been a very democratic process,” Kern says. Teachers self-organized by region to volunteer at about 20 shelters throughout the city. They ran mini-schools and day cares, organized supplies, led yoga classes, and more.

Before school resumed, volunteers organized free day camps so parents could clean homes or apply for aid. A special education teacher led a camp for students with special needs, having managed to get each one’s individualized education plan from the district. “Can anyone else, in a day and a half, set up a camp at a shelter with no resources, no budget, nothing?” Kern asks. “That’s what teachers do.” 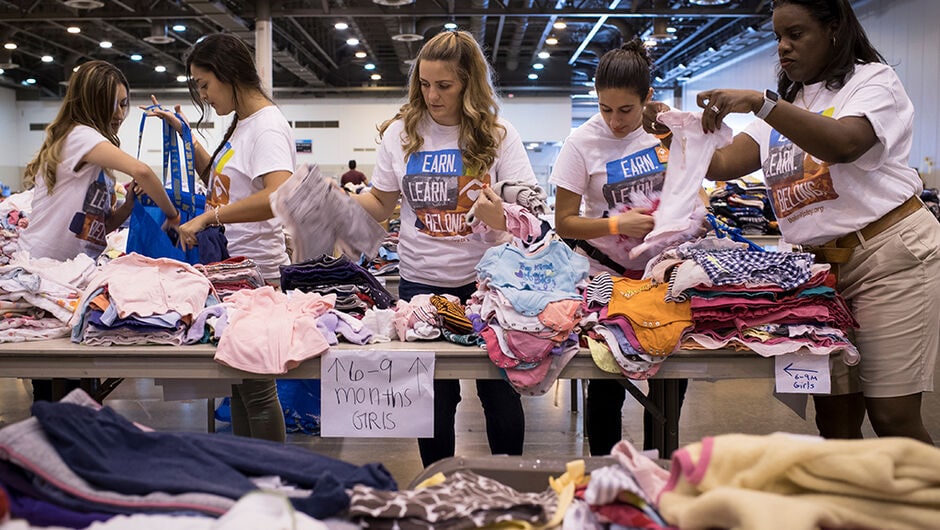 In another example of teacher leadership, dozens of teachers from Promise Community Schools in Houston, a division of the BakerRipley neighborhood development organization, showed up at the NRG Center on the day it opened its doors as a shelter—ultimately to about 8,500 residents. The teachers set up child care zones where kids could play, laugh, and learn while their parents secured cots and food, called loved ones, and rested. Promise Superintendent Anastasia Anderson (Houston ’93) says, “We teach beyond the classroom. We take care of our families. We take care of the children.” 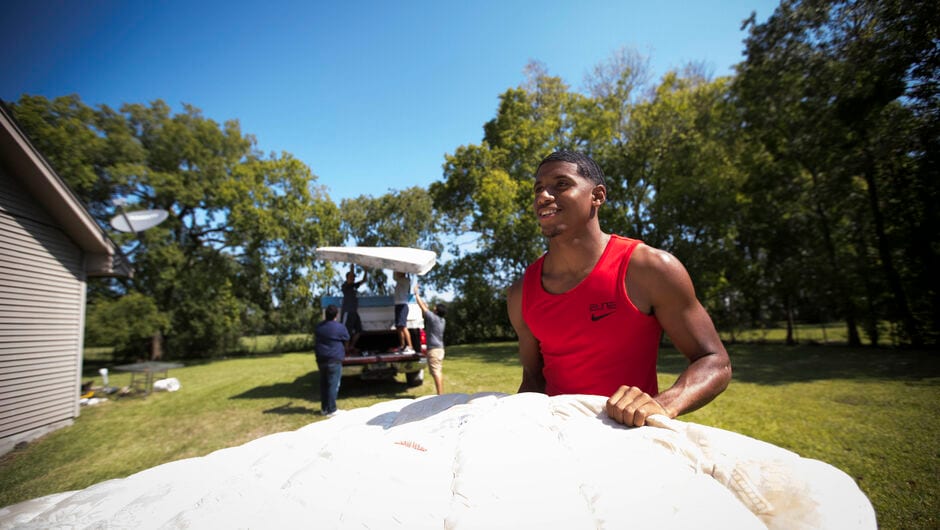 Brian Gaston (Houston ’10) expects to be amazed by his students, and their reaction to Hurricane Harvey didn’t disappoint. At North Houston Early College High School, where Gaston is a first-year principal, National Honor Society students showed up on their own to host clothing drives for fellow students. They also joined a teacher to clean out the damaged home of a school staff member.

But it was students from Heights High School, where Gaston served most recently as an assistant principal, who stepped up to help the hard-hit northeast Houston neighborhood, where the median family income is significantly lower than the citywide average, and where Gaston was keeping tabs on old friends and family as the water rushed in.

Gaston had heard from members of the Heights High School social and service club for young men, The Gents, who wanted to volunteer and live out their club’s mission. Many were already out in smaller groups, cleaning up their own homes and those of their neighbors. They were eager to go on a clean-up mission with Gaston and the club’s co-sponsor, Bradley Harrison (Houston ’14).

On the day the sky cleared, brothers (and Gents) Ralph and Israel Adams left the George R. Brown Convention Center, where they were staying with family. They joined up with Gaston, Harrison, and more than a dozen other students to gut homes in northeast Houston, tearing out mold-infested sheetrock and removing waterlogged furniture. In one of those homes lived Gaston’s 84-year-old grandmother, Catherine, whose previous home had been destroyed in 2001 by tropical storm Allison. 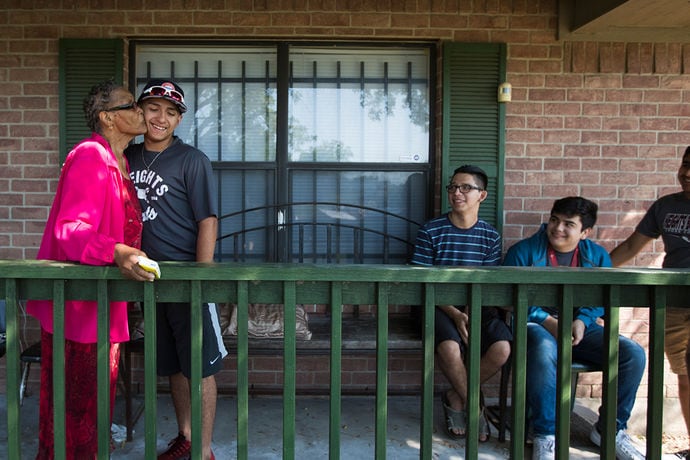 A week later, the Gents returned to visit Catherine Gaston. She greeted them on her green-trimmed front porch with a hug and a kiss on the cheek for each, her eyes welling with tears. But soon the young men had her smiling, holding her hands and joking. “The best part about all of this is that we developed a bond with someone we would have never met before,” said Alberto Enriquez, a senior at Heights High. “We have a bigger family now.”

First application deadlines for some honors programs and early admissions come as early as October, with regular deadlines soon to follow. Some students lost paper records in the waters. Floods displaced many Houston-area seniors from their schools and school leaders, teachers, and counselors who could gather their records and write recommendations. Compounding that, those educators have post-Harvey classroom responsibilities, paperwork, and challenges of their own to manage atop the usual load.

So Bryantt is working to persuade colleges and universities to extend deadlines for students coming from flood zones.

Some seniors attend schools, Bryantt notes, where administrators have trimmed higher-level courses, like advanced placement and dual-credit college classes, due to staffing shortages and time constraints. As a result, college admissions officers may see a drop in the rigor of seniors’ coursework, or students may become ineligible for special programs and scholarships toward which they’ve been working. Bryantt is trying to make sure admissions officers understand those less obvious impacts of a natural disaster. Students have lost so much, he says. Their college dreams should be saved. 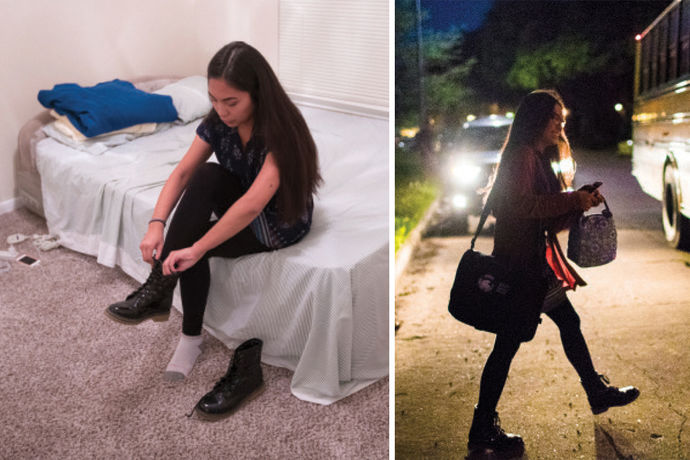 Back to School, Finally

Before Harvey, Trisha Litong (above) could only think about the first day of her senior year at Energy Institute High School, a selective magnet school in downtown Houston. Then the floods ruined her family’s home and damaged parts of her school, delaying the school year by two weeks. Litong, a fellow with EMERGE (the college prep program founded by Houston ‘08 alum Rick Cruz) spent part of the summer at an engineering program at Stanford University. She says she can’t dwell on what’s lost for fear of losing sight of what’s ahead. So before the sun rose on Monday, September 11, she woke up in her family’s new FEMA-approved apartment, got dressed, and finally stepped on the bus to the first day of school—tired, changed, but laser-focused.