What does an education look like for an undocumented immigrant? Since DACA's inception in 2012, more immigrants are attending and graduating high school than ever before; however, the United States' immigration system can create barriers to accessibility. Sara Mora will share her journey from migrant to DACA-recipient to entrepreneur and will explain how access to education is essential in raising human capital. 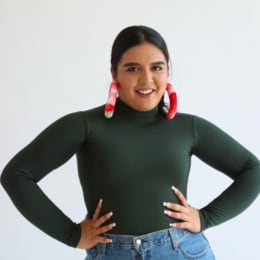 Known as @MissSaraMora on social media globally, Sara has become a sought-after voice in the fight for immigrants’ rights as the co-president of Women’s March Youth Empower, and the founder of Who Is Our 2020, a social platform for promoting youth voter turnout and engagement.

When Trump’s administration ended DACA in 2018, Sara joined with others to form part of a lawsuit against the presidential administration. She is currently in the United States as a DACA Dreamer. Sara works to amplify the voices and work of the immigrant community at the California border. Her online presence is dedicated to the idea that migration is a human right and a humanitarian crisis.

Sara recently was featured in the documentary The 2020 Project in partnership with Levis, Eighteen X18 and Yara Shahidi. She is a delegate of Eighteen X18 which focuses on youth voter registration and serves as a creative platform meant to uplift the voices of existing youth leaders. In March 2020, Sara was named one of the top 10 young latinx leaders changing the world by Pop Sugar and Do Something. Her journey begins at believing that the world can be changed and ends at the conclusion that the sky is the limit. In her own words, “this is only the beginning.”