What happens when the diverse communities of our nation are represented and actively celebrated in art, media, literature, and culture? During this event, we’ll explore how representation and creation leads to an inclusive society that celebrates the rich and diverse heritages of Americans and fosters healing for our marginalized communities. We’ll examine how we empower youth and each other to unleash radical creativity and work toward social justice. 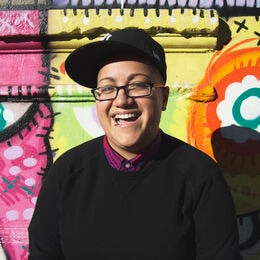 Gabby Rivera is an outgoing, outspoken creator invested in fostering better dialogue, inspiring radical creativity, and improving our most vulnerable communities. The author of Juliet Takes a Breath, she’s also the writer of the Marvel series America—featuring the first queer, Latinx teen-girl superhero, ever. It’s catching headlines from The New York Times, Vogue, and beyond: and Marvel Studios and Disney+ just announced a new show based on the series.

Charismatic and charming, Gabby Rivera is dedicated to empowering people and improving our marginalized communities. She’s currently making major waves for her new Marvel series starring America Chavez: a queer, Latinx superhero who’s been written and designed, crucially, by a queer Latinx. And while the series is “definitely going to tackle America’s ancestry and ethnicity,” Rivera tells The Washington Post, it’s also a comic book with wide appeal: committed to snappy one-liners, blowing stuff up, and beating up the bad guys, naturally. Rivera’s newest project is b.b. free, an original story following the coming-of-age adventure of b.b., in a post-apocalyptic world not quite like anything you’ve seen before. Set to be released by BOOM! Studios, Rivera calls b.b. free “a bouncy love letter to queer kids everywhere, especially the chubby Puerto Rican ones.” Read more about Gabby here.